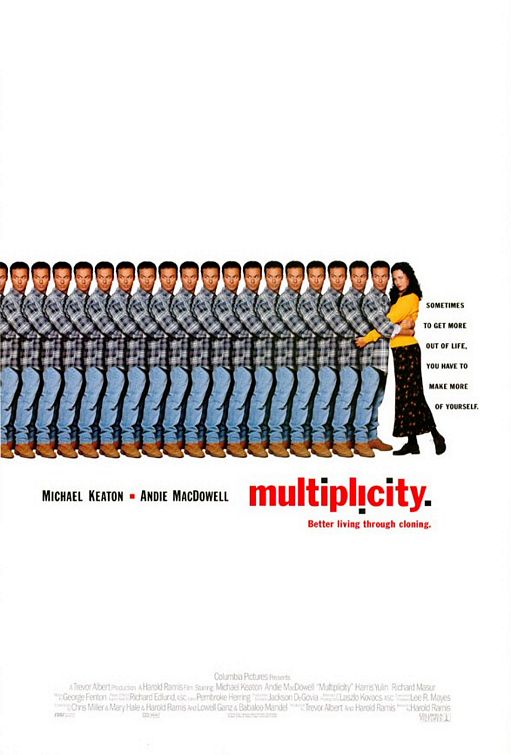 In MULTIPLICITY, Michael Keaton stars as four clones of Doug Kinney. Like many Americans, Doug is a husband, father and provider who never seems to make ends meet. One day, he meets a scientist who can clone him. However, Doug finds that more of himself is not quite as helpful as he had hoped. With some obscenities, profanities and sexual situations as well as mediocre special effects, it is a comedy that rests completely on the performance of the leading man.

(Pa, B, LL, S, A) Pagan worldview with a moral conclusion demonstrating a man who wants to escape responsibility, but accepts it in the end; 23 obscenities, 2 profanities & 3 vulgarities; no violence; some sexual situations but no open sex; and, casual alcohol use

In MULTIPLICITY, Michael Keaton stars as four clones of Doug Kinney . Like many Americans, Doug is man who never seems to make ends meet. One day, he meets a scientist who can clone him. The first clone, referred to as 2, takes care of his job, while Doug plays the husband. Soon, Doug is tired of being at home, but 2 refuses to switch places. Also, 2 is getting lonely. So, Doug makes 3, an emotional, feminine side of Doug himself. Two and 3 make clone 4, who is mentally deficient because he is only a copy of a copy. When Doug finds out, he panics and anger rises. Doug loses his job and his family and needs 2, 3 and 4 to help him work a miracle.

MULTIPLICITY is a movie about a self-centered man’s struggle to find himself. The special effects do not work, distracting the audience and drawing attention away from the story. Doug states at one point, “My world flashed in front of my face and the funny thing is, I wasn’t in it.” Doug increased, and it didn’t help his life. It is only when God increases, and we decrease that we have victory over self-centeredness and the need to be all things to all people. This movie contains some obscenities, profanities and sexual situations.