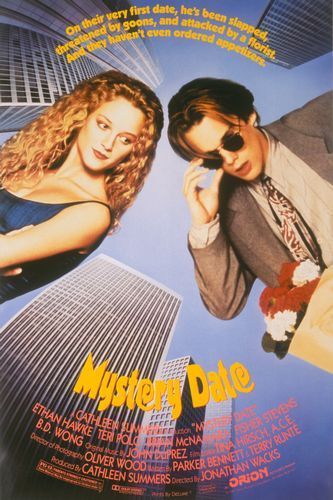 Accepting his suave older brother's advice to "just be me" on a MYSTERY DATE, Tom McCue finds himself pulled into a whirlwind of events involving the police, Chinese mafia and a homicidal flower shop delivery boy. Although an unspoken truth proclaimed in MYSTERY DATE is that "bad company corrupts good character" (1 Corinthians 15:33), the violence and gore make it not worth the time or money.

Accepting his older brother’s advice to “JUST BE ME!” on a MYSTERY DATE, Tom McCue finds himself drawn into a whirlwind of events involving the police, the Chinese mafia and a deranged delivery boy, while trying to show the girl of his dreams the time of her life.

It starts when Tom’s parents leave town and his idolized, older brother, Greg, shows up arranges a mystery date for Tom with their gorgeous blond neighbor. Tom has worshipped this creature from afar, but has never had the courage to meet her.

To arrange the date, Greg pretends to be Tom over the phone. Then he gives his little brother a crash course in coolness, including new clothes, a haircut and a pair of stylish glasses he doesn’t need. Looking like a clone of his older brother, Tom receives a credit card with the assurance that he can use it anywhere and spend whatever he wants.

Unfortunately for Tom, Greg’s generosity is really a means of establishing an alibi for himself as he steals a priceless vase across town, in an attempt to frame the local branch of the Chinese mafia. His scheme backfires, however, when Tom takes Greg’s convertible for his date, something he was specifically told not to do.

An undercover cop recognizes the convertible and follows the couple to a gas station. Mistaking Tom for his older brother, the policeman tries to arrest him while his date is in the restroom.

In a freak accident, the policeman is killed. Tom is completely innocent, but he panics and stuffs the cop into his trunk, just seconds before his dream girl returns.

The rest of the film continues in a similar vein, as frantic Tom searches for his brother while trying to keep his date from knowing they are driving around with a dead policeman in their trunk.

To make matters worse, Tom and his date are chased by the angry Chinese mafia. Tom can’t keep the secret from her any longer. Shortly thereafter, she is captured, and Tom and Greg must rescue her.

Another hilarious element of the movie is the homicidal delivery boy, played by Fisher Stevens, who wants revenge on Greg for a lifetime of humiliation. This poor boy shows up repeatedly to menace Tom, whom he mistakes for Greg as everyone else does. Seemingly indestructible, the boy falls from a bridge and gets hit by a train, but keeps coming back for more.

Generally, however, the movie tends to drag, especially after the girl discovers what is happening. Worse is the rather confusing and predictable mystery plot.

Furthermore, MYSTERY DATE contains considerable gore and violence. In one scene, we see blood dripping from the trunk of Tom’s car, which is mistaken by a policeman as a transmission leak. Also, there is a stomach-wrenching mock decapitation scene that takes place at a punk bar.

Regular moviegoers may see this as standard fare, but Christians will not. Murder has been denounced since the days of Moses, with the fifth commandment: “Thou shalt not kill” (Exodus 20:13), and seeing it portrayed in films does not make it acceptable.

Even so, an unspoken truth proclaimed in MYSTERY DATE is that “bad company corrupts good character” (1 Corinthians 15:33). By innocently following the whims of his brother, Tom stumbled into a murder and entrapment with the police and mafia.

However, all things considered, MYSTERY DATE may not be the place you want to spend your time and money.