MYSTERY OF THE KINGDOM OF GOD 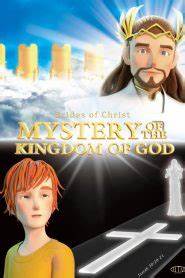 MYSTERY OF THE KINGDOM OF GOD is a faith-based animated drama about a young man who comes to faith in Christ, then encounters various spiritual battles. The beginning has an overview of the Bible. The ending tells what happens after the Second Coming of Jesus Christ, as depicted in the Book of Revelation. After the introduction, the movie shows the spiritual journey of Andrew, as he comes to faith in Christ and becomes a missionary, then a youth pastor. Along the way, Andrew faces several spiritual battles with Satan, his demons and people who reject Jesus.

The animation in MYSTERY OF THE KINGDOM OF GOD is rudimentary. Also, all the voices, including the female voices, are done by the movie’s male director, who has a bit of an accent. However, the movie has a very strong evangelistic worldview with many positive biblical references. The story in MYSTERY OF THE KINGDOM OF GOD is told from a Pentecostal, Dispensational perspective. MOVIEGUIDE® advises caution for younger children because of some violence, a reference to drug addiction and spooky encounters with Satan and his demons.

(CCC, BBB, V, A, DD, M):
Dominant Worldview and Other Worldview Content/Elements:
Very strong Christian, evangelical worldview with many biblical references, many prayers and sermons, a survey of the Bible and the major events in the Book of Revelation, and people engage in spiritual warfare with Satan, demons and people siding with Satan, but they overcome and Jesus wins in the end
Foul Language:
No obscenities or profanities, but a teenage boy says darn and “buttload”
Violence:
Satan and his flowers battle the angels of God, Jesus casts down Satan onto the Earth and into the Lake of Fire, nonbelievers are cast into the Lake of Fire, young man engages in spiritual warfare with Satan, his demons and nonbelievers siding with Satan, sometimes the forces of darkness knock him down or fling him against things, spooky encounters with two witch doctors and a New Age fortune teller
Sex:
No sex, but young man appears to be living together briefly with his girlfriend, and girlfriend hugs him when they come home, but they eventually break up after the man gives his life to Jesus
Nudity:
No nudity
Alcohol Use:
Alcohol is shown in one scene where a people are partying
Smoking and/or Drug Use and Abuse:
No smoking but young woman prays with her sister after sister admits she’s become a drug addict; and,
Miscellaneous Immorality:
Christian character have some setbacks in their spiritual warfare with the forces of darkness but they overcome, though perhaps too easily.

MYSTERY OF THE KINGDOM OF GOD is a faith-based animated drama about a young man who comes to faith in Christ, then encounters various spiritual battles with demonic forces as a missionary in Africa and as a youth teacher in the United States. The animation in MYSTERY OF THE KINGDOM OF GOD is rudimentary and all the voices, including the female voices, are done by the movie’s male director, but the story is very Christian and evangelical, from a Pentecostal, Dispensational perspective, and takes viewers through the main events in the Book of Revelation.

The movie opens with scenes of Satan and some angels rebelling against God the Father. Other angels fight with Satan and his followers, and Satan is cast down to Earth by the Son of God, Jesus, the Word Made Flesh. The movie then gives a brief survey of God’s interaction with mankind, starting with Adam and ending with Jesus Christ’s death and resurrection plus the day of Pentecost when Christ’s disciples received the Holy Spirit.

In Heaven, an angel reports to Jesus that a young man named Eric has rejected the Gospel. So, Jesus picks another soul, Andrew Job, to take Eric’s place as one of the saints who will rule with Him during the coming Millennium (Revelation 20:4-6).

Cut to Andrew as a young teenage boy, sitting on a couch with his friend, Jarrod, playing a video game. Andrew and Jarrod go outside to play some basketball, but a demon enters a sleepy van driver, and Jarrod is hit and killed by the van when he pushes Andrew out of the way.

Several years later, Andrew is a devastated and troubled young man because of what happened to Jarrod. His girlfriend, Tanya, who lives with him, is worried about him. The next day, Andrew comes upon an advertisement for a New Age fortune teller. He steps into the woman’s creepy “office.” Viewers see that the woman is surrounded and even possessed by demons. Andrew notices that something is terribly wrong with the woman. He wants to leave, but the woman and the demons around her stop him. Andrew prays to God, and a mysterious man bursts through the door and drags Andrew out of there. Outside, the man gives Andrew a card and tells him to go see a man named Robert Brown, who will baptize Andrew with the Holy Spirit.

Andrew finds out that the address on the card is actually a Christian church, and Mr. Brown is the church’s pastor. Inside the church, Pastor Brown is giving a sermon. Suddenly, he stops and calls out to Andrew. He tells Andrew that he needs to be baptized with the Holy Spirit so he can cast out demons and teach the Gospel to young people. Pastor Brown preaches the Gospel to Andrew and asks him to give his life to the Lord. Andrew agrees, and Pastor Brown prays over him. As he prays, Pastor Brown casts out the demons harassing Andrew, and the Holy Spirit comes to enter Andrew’s heart and give him new life. Andrew glows and passes out. When he wakes, Pastor Brown is gone, but a man named Jonathan is there to give Andrew a ride back home. Johnathan tells Andrew that Pastor Brown wants to begin discipling and training Andrew to be a servant of God.

Andrew starts to attend all the services at Pastor Brown’s church. Pastor Brown talks about following the leading of the Holy Spirit and the teachings of the Bible. Andrew gets rid of the worldly books and things in his life, and he and Tanya break up.

Pastor Brown encourages Andrew and Jonathan to go to Africa to become missionaries under the leadership of a friend of his. There, they meet two other young Christian missionaries, a Christian singer named Maylene and a young man named Dillon. When they run up against a powerful witch doctor, Jonathan, Andrew and Maylene do spiritual battle with him, led by the Holy Spirit, but Dillon is too fearful and prideful. The spiritual battle is very literal.

After defeating the witch doctor, Andrew and Maylene return to the United States, where Andrew becomes a youth pastor. However, Satan sends a powerful demon to lead Andrew astray by possessing the body of a pretty young woman. So, the question becomes, will Andrew overcome Satan’s temptations and “reign with Christ for a thousand years” when Jesus returns (Revelation 20:6)?

The animation in MYSTERY OF THE KINGDOM OF GOD is rudimentary. Also, all of the voices, including the female voices, are done by the movie’s male director, Adam Smit, who has a bit of an accent. So, the movie clearly has a low budget. The script by Smit and Producer Jenny Chen tries to do too much. The movie is not just about Andrew. It also features narration by Adam giving viewers a survey of the fall of Satan, biblical history and eventually, what happens to Andrew and the other major characters after the second Coming of Jesus Christ. Andrew’s walk with God before the Second Coming is the movie’s strongest, most dramatic and most personal part.

MYSTERY OF THE KINGDOM OF GOD has a very strong Christian, evangelistic worldview with many positive biblical references. The story is told, however, from a Pentecostal and Dispensational perspective, so Christians who don’t share such a perspective may not respond as strongly to the movie. Nevertheless, the movie still manages to convict the viewer about the impact of sin and the need for constant prayer. It also constantly reminds the viewer that we are in a very real spiritual battle against the forces of darkness led by Satan. That said, the movie would have benefitted from citing the Armor of God in Ephesians 6:10-18, where Paul talks about putting on and using the belt of truth, the breastplate of righteousness, the gospel of peace, the shield of faith, the helmet of salvation, the boots of readiness, and the sword of the Spirit, which is God’s word. Also, the movie shows scenes from Heaven where God the Father speaks and Jesus speaks, but the Holy Spirit doesn’t speak, so the movie’s theology about the nature of the Holy Trinity seems a little vague.

In his classic book THE GOSPEL OF THE KINGDOM OF GOD, Baptist theologian and professor George Eldon Ladd writes that the Kingdom of God should be considered the Reign of God on Earth in this age and the age to come. He urges Christians to yield to the reign or rule of God in their hearts through the Gospel of Jesus Christ and the power of the Holy Spirit, including the guidance of the Bible. As Jesus commands in Matthew 6:33, “Seek first the Kingdom of God and His righteousness.”

In a way, MYSTERY OF THE KINGDOM OF GOD reflects this positive scriptural message, so it will benefit those who see it, if they can make allowances for the low budget. That said, the movie contains some violence and spooky encounters with Satan and his demons. Also, in one scene, Maylene’s sister admits she’s addicted to drugs, but Maylene leads her to Christ. Because of this content, MOVIEGUIDE® advises caution for younger children. MYSTERY OF THE KINGDOM OF GOD is not designed as a children’s movie, so families should take note of that when it comes to seeing the movie.