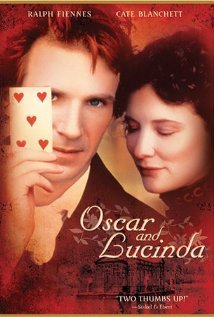 OSCAR AND LUCINDA is a quirky, though lavishly produced romantic drama about an couple who share love and a passion for gambling in mid-19th Century Australia. Oscar, played by Ralph Fiennes, is oppressed by his stern preacher father, so he runs away to become an Anglican minister. Shunned by his fellow students at Oxford, Oscar develops a taste for gambling. Soon, Oscar realizes that he must leave his gambling past and decides to sail to Australia to become a missionary. On the ship, he meets an Australian glass heiress, named Lucinda. Oscar falls in love with Lucinda and promises to make her a glass church and deliver it to a Christian outpost in Northern Australia. The trip proves to be tragic.

OSCAR AND LUCINDA comments on social mores, industrial development, religious practices, and repression. Oscar is shown to be repulsed by the rigid Victorian religious constraints, though he wants to follow God whom he genuinely loves. He prays often, sings hymns and reads the Bible. Lucinda is an outcast and an eccentric. OSCAR AND LUCINDA has beautiful photography, lavish costumes, detailed art direction, and an original story. However, the obvious pain in the lives of the two protagonists demonstrated by guilt, fear, violence, and some sexual situations.

OSCAR AND LUCINDA is a quirky, but lavishly produced, romantic drama about an odd couple who share love and a passion for gambling in mid-19th Century Australia. Oscar and Lucinda are misfits, risk-takers and lovers of chance, who are rejected by the society around them and so endeavor to live life fully by combining religion, gambling and adventure. Although containing a great amount of Christian content, Oscar and Lucinda see their religion as inducing guilt, which results in personal tragedy for both.

Living in England as a young boy with fiery red hair, Oscar (Ralph Fiennes) is oppressed by his stern preacher father. (On Christmas, Oscar was even spanked for eating a delicious pudding.) Allowed no frivolity, Oscar dreams of something more and even dares to ask God for a sign. When Oscar flips a coin which continually lands on a marker representing the Anglican faith, he concludes he must leave home and train to become an Anglican minister. Scared at first, Oscar is relieved to know that Anglicans are slightly less rigid in their moral strictures.

As an adult, Oscar goes to Oxford. Shunned by his fellow students, Oscar befriends a fellow named Wardley Fish, who loves to gamble at the race track. Oscar feels free and alive when he bets on the horses and wins. At first, Oscar doesn’t believe that gambling is a sin, but actually God’s provision. Oscar takes only what he needs and gives the rest to his Anglican friend, the Rev. Hugh Stratton (Tom Wilkinson). Over time, however, Oscar comes to the conclusion that he must leave his gambling past and decides to sail to Australia to become a missionary.

On the ship, he meets an Australian glass heiress, Lucinda Leplastrier (Cate Blanchett), a wealthy industrialist woman who also has a passion for gambling. Lucinda goes to Oscar to confess her sin of gambling, but the two end up playing cards all night. As Oscar falls in love with Lucinda, he also becomes insanely jealous of her affections for the Reverend Dennis Hasset (Ciaran Hinds, who acted in MOVIEGUIDE award winning PERSUASION). Oscar makes a final bet with Lucinda. He will wager that he can manufacture and deliver a glass church to the Rev. Hasset, as a dramatic and clear expression of his love for her. The trip up river to Rev. Hasset’s post proves to contain its own adventures and drastic consequences.

Like many movies set in the Victorian Age, this movies has a lot of commentary on social mores, industrial development, religious practices, and repression. Oscar is disgusted by the Victorian religious constraints, yet he is compelled to follow God whom he genuinely wants to serve and love. He prays often, sings hymns and reads the Bible, but he seems so overcome by fear and guilt that his religion appears to be a burden. The audience witnesses plenty of religious oppression by his father, which produces anti-social behaviors in Oscar, but they also witness a man devoted to his God despite his flaws and his overwhelming desire to gamble. He also feels remorse, when, a woman takes advantage of him sexually, while he is feeling sick and unable to defend himself. At another time, Oscar is so determined to deliver the church that he kills a disapproving man with a hatchet in a passionate skirmish.

The depth of character in Lucinda is not nearly as clear, nor examined, but she too is an outcast and an eccentric. As a rich business owner, she feels that she is unreachable by the common man. In fact, the Rev. Hasset disavows himself of her and doesn’t want to be in business with her because of her gambling habit. She doesn’t breach any sexual mores, but she cannot fully demonstrate her love for Oscar or tell him about it.

OSCAR AND LUCINDA has beautiful photography, lavish costumes, detailed art direction, and a very original story. All of these make the movie an intriguing viewing experience. However, the obvious pain in the lives of the two protagonists is troublesome and difficult to watch, particularly for Christians who know of God’s grace and forgiveness. Oscar and Lucinda do not know of the Bible verse, “There is therefore, now, no condemnation for those who are in Christ Jesus.” They haven’t applied the liberating power of Christ’s shed blood in order to, not only, clear their conscience, but also to triumph over compulsions and bad habits. Jesus Christ is all powerful, but our two protagonists don’t know it. Perhaps, the most troubling aspect of this movie is that these two fail to grasp that love of Christ and know God only as a judgmental force.

While too odd to be embraced by the general public, this movie will be popular with art house patrons. It may serve as a good discussion starter on matters of faith, grace and fulfilling one’s call in life. Regrettably, it may also plant ideas in the minds of non-Christians that God administers condemnation and that Christianity is all about following rules. Nevertheless, after two acting turns as a Nazi in SCHINDLER’S LIST and THE ENGLISH PATIENT, it is refreshing to see Ralph Fiennes play a Christian.