OZ THE GREAT AND POWERFUL

"Entertaining Journey to a Wondrous Land" 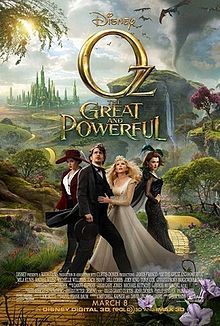 OZ THE GREAT AND POWERFUL is a modern prequel to the beloved classic movie THE WIZARD OF OZ. Oscar Diggs the magician of a traveling circus. All throughout his career, he’s been able to fake magic. Until one day, a little girl in a wheelchair asks for his help. Running away, Oscar hops into a hot air balloon, which takes him into a tornado. Praying he will survive, Oscar lands in a fantastic land. He soon meets a woman named Theodora. She believes Oscar is the prophesied wizard who will defeat evil and bring peace to the land, but Theodora’s evil sister tells Oscar some lies that almost cause him to do a very bad thing.

OZ THE GREAT AND POWERFUL is an entertaining, big budget production with beautiful scenes creating a wondrous fantasy land. The movie has a nice comical tone that doesn’t take itself too seriously. It also has a strong moral, redemptive worldview. Goodness and prayer are extolled and lives are saved. However, there are some scary elements requiring caution for younger children. Also, there are references to magic in OZ that require discernment.

(CC, BB, OO, L, M, V) Strong redemptive worldview with strong moral elements includes main character prays to God not to die, goodness is extolled, a rainbow appears after some massive destruction, there are mentions of a savior to bring peace to the land and destroy wickedness, main character saves two lives, with some witchcraft such as witches use magical ball to see what’s happening and witches use magic to attack characters; three obscenities and one profanity; light, sometimes scary violence man hits other man on the head multiple times, witches use magic to attack characters, flying monkeys attack; no sexual content; no nudity but some low cut dresses; drinking; no smoking or drug use; and, lying, main character lies many times, greed.

Oscar Diggs, played by James Franco, is a magician for a traveling circus. Oscar’s magical talents are questioned when a young girl pleads for Oscar to help her walk out of her wheelchair. This leads Oscar to jump into a hot air balloon, but what he didn’t see was a huge tornado coming, which sweeps him up and drops him into a fantastic land. The land has been under the control of a wicked witch, which has led to destruction.

Theodora, another witch, finds Oscar when he first arrives. She tells him there is a prophecy told by the former king that a wizard is coming to Oz to destroy evil and bring peace to the land. Oscar says he’s somewhat of a wizard himself. So, Theodora believes Oscar is the one to fulfill the prophecy. Playing with her, Oscar dances with Theodora. She falls in love with him and leads him to the Emerald City, the capitol.

Evanora, Theodora’s sister, is corrupt and has told her sister lies, telling her their sister, Glinda, had killed their father, when actually Evanora had done the evil deed. Wanting Glinda dead so she can have complete reign, Evanora tells Oscar he must go kill Glinda. However, when Oscar sees Glinda, she tells him the truth and the two have an instant connection.

Together, Glinda and Oscar start to strategize how to regain Emerald City from Evanora and Theodora and protect the people. The thing is, Oscar doesn’t have any real magic. Will they be able to take back the city without magical powers?

OZ THE GREAT AND POWERFUL doesn’t match, much less exceed, the delights in the classic WIZARD OF OZ with Judy Garland. How could it? Even, it’s an entertaining, big budget production with beautiful scenes creating a wondrous fantasy land. OZ has a nice comical tone that doesn’t take itself too seriously. However, it also has some scary elements that would scare younger children.

OZ THE GREAT AND POWERFUL contains a strong moral, redemptive worldview where the main character has to sacrifice himself to help the people of OZ. In fact, there are some elements to the movie that seem like a metaphor to Christianity, including the idea of a messianic, powerful person fulfilling the prophecy made by the king to restore peace. When the Wizard does come to restore peace, like Jesus, he’s not exactly what the people of Oz expected, but they believe in him anyway. Unlike Jesus, however, the “wizard” in this movie isn’t perfect. He does sin. Also, there are witches in OZ THE GREAT AND POWERFUL who have supernatural powers.

MOVIEGUIDE® advises caution for younger children because of the scary moments. Also, there are references to magic that require discernment. Overall, however, OZ THE GREAT AND POWERFUL is an entertaining, redemptive journey to a wondrous land.

Rent or Buy OZ THE GREAT AND POWERFUL: