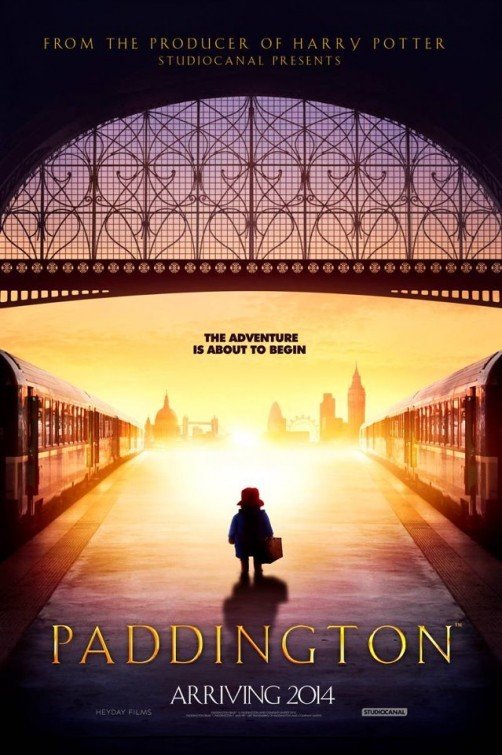 PADDINGTON is based on the beloved children’s books about a friendly talking bear from “deepest, darkest Peru” who comes to London to find a new home. Paddington the bear finds a temporary home with the Brown family, which includes Henry, his wife, Mary, and their two children, Judy and Jonathan. However, Paddington almost destroys the family’s bathroom and staircase. This doesn’t sit well with Henry, who’s concerned about protecting his family. Henry wants to turn Paddington over to “the authorities,” but Mary wants to help Paddington find the explorer who long ago befriended Paddington’s aunt and uncle. Meanwhile, a museum taxidermist wants to kidnap Paddington and have him stuffed.

PADDINGTON is delightfully funny, winsome and absolutely charming. Its hero gets into all sorts of comical, and even exciting, predicaments. PADDINGTON has many heartwarming moments, with positive messages about caring for and protecting one’s family, being kind to strangers, and having polite manners. It does have three light profanities and scenes of jeopardy. Also, the villain is mean, and the family’s maid gets drunk in one scene. Otherwise, PADDINGTON is great wholesome fun.

(BBB, C, L, V, AA, M) Very strong moral worldview with redemptive elements about family, protecting one’s family, having manners, being kind to strangers, the benefits of adoption, forgiveness, and with a positive reference to God; light foul language includes the word “damned” on a subway poster, another possible verbal “d” word and three light profanities, including an old fashioned “Good Lord!,” a “for God’s sake,” and an exclamatory “God!”; some light comical and action violence includes a minor villain takes a pratfall, major villain falls off a high roof but is shown having grabbed a flagpole, villain shoots tranquilizer darts at a bear and some humans, earthquake demolishes the home of a bear family, and it’s implied a tree falls on one of the bears, bear accidentally plugs up a running toilet and turns on a shower and this floods the bathroom, the bathtub with the bear in it slides down the stairs when the bathroom door holding all the water is opened, bear accidentally cleans his ears with two toothbrushes, bear accidentally travels down the street on a skateboard, bear destroys a pneumatic mailing system when his sandwich gets stuck in one of the tubes, etc.; no sex; no nudity; maid creates a ruse by enticing a security guard into a drinking game, and she gets drunk; no smoking or illicit drug use or sales; and, kidnapping but rebuked, stealing but rebuked, man dresses up as a cleaning woman to sneak into the Geographers Guild, and a male guard there thinks he looks beautiful.

PADDINGTON is based on the beloved children’s books about a friendly talking bear from “deepest, darkest Peru” who comes to London to find a new home. PADDINGTON is a pure delight. It’s also very funny, winsome and absolutely charming.

The movie begins years ago, when an explorer from the Geographers Guild in London travels to the Peruvian jungles to find a specimen for the Museum of Natural History. He stumbles on a couple of bears, but doesn’t have the heart to shoot them or take them back to England. In fact, he’s amazed to find that these bears can talk. He gives the bears some jars of marmalade, a snowglobe of London and a phonograph. You will always find a home in London whenever you come to visit, the explorer adds. He then tosses his hat to the male bear before returning to England to report his findings.

Cut to present day. The two bears have become older. They are also raising a young orphaned bear, who calls them Aunt Lucy and Uncle Pastuzo. One day, an earthquake strikes, and Uncle Pastuzo dies. With their home destroyed, Aunt Lucy gives her nephew the explorer’s hat, a bunch of her own special marmalade, and tells him to go to London to find the explorer and get a new home. Since she is too old for the journey, she will go to the Home for Retired Bears. Before they part, Aunt Lucy reminds her young nephew to mind his manners and always be polite.

The young bear stows away on a ship to London. Eventually, he ends up at Paddington Station, but discovers that none of the people there want to give him the time of day, much less a new home. The station’s pigeons, however, would like to eat the marmalade sandwich he keeps under his hat for emergencies.

Sitting forlornly on his small suitcase, the bear sees a family of four approach. He explains his situation to Mr. and Mrs. Henry Brown, and their two children, but the father doesn’t want to get involved. The mother, Mary, however, takes pity on the poor bear and convinces her husband they can at least put him up for one night. Reluctantly, Henry agrees. They get the bear some food at the station, since all he has left is his emergency marmalade sandwich. Henry asks the bear his name, but Henry can’t pronounce his name, so Mary decides they should call him Paddington, after the railway station’s name.

Sure enough, back at the Brown home in Windsor Gardens, Paddington causes nothing but trouble. Paddington may be very polite, but he’s also very clumsy. His clumsiness almost destroys their bathroom and circular staircase. Henry wants to turn Paddington over to “the authorities,” but Mary decides to help Paddington find the explorer.

Meanwhile, however, the taxidermist at the Museum of Natural History hears about Paddington and his story. All her life, she’s been wanting to have one of the Peruvian bears stuffed and placed into one of the museum’s exhibits. She teams up with one of the Brown family’s neighbors, the disagreeable Mr. Curry, to kidnap Paddington. More comical, exciting adventures follow.

PADDINGTON is delightfully funny, winsome and absolutely charming. Its comical hero gets into all sorts of funny, and even exciting, predicaments. In an early scene at the railway station, Paddington gives a lonely pigeon a piece of his marmalade sandwich and, suddenly, there are a whole lot of pigeons at his feet begging for a bite to eat. Later, Paddington spies a pickpocket dropping a wallet in a store, but Paddington thinks the wallet is the pickpocket’s own property. He tries to return the wallet to the man, but the man keeps trying to escape. This is the beginning of a hilarious chase sequence that turns Paddington into a local hero. It’s also how the villain learns about Paddington’s arrival in London. Kudos to Director Paul King for writing such a solid script and giving the movie such a funny, joyful, whimsical tone.

PADDINGTON also has lots of heartwarming moments as Paddington tries to find a new home, and as Henry learns to appreciate the benefits Paddington provides to the Brown family. Inserted into these heartwarming moments are positive messages about being kind to strangers, protecting one’s family and the importance of manners. PADDINGTON does have some light exclamatory profanities, scenes of jeopardy, and a “d” obscenity on a subway poster advertising what looks like a stage play of some kind. Also, the villain is mean, and the Browns’ maid gets drunk in one scene. Otherwise, however, PADDINGTON is just great wholesome fun.