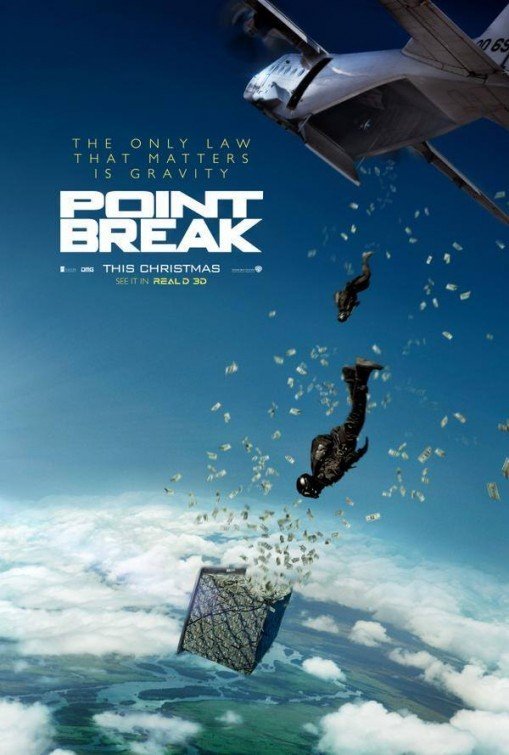 POINT BREAK, a 2015 remake of a 1991 cult classic, opens with extreme motorcyclist Johnny Utah and his best friend riding motorbikes atop a treacherous mountain range. Johnny’s friend lands poorly after a jump and falls to his death. Cut to seven years later with Johnny trying to get hired as an FBI agent, after completing law school. Johnny’s prospective FBI boss doesn’t think he’s committed enough and is too reckless. Then, Johnny hears about a gang of thieves pulling off elaborate heists at exotic, dangerous locations. Johnny figures out their plan and impresses his boss into sending him to France to infiltrate the gang. As he gets to know them, including their anti-capitalist, environmentalist political activism, Johnny is emotionally torn.

The acting in POINT BREAK is mediocre. There are long stretches where no one talks to each other. These are filled with one outlandish stunt sequence after another, sometimes with no connection to the basic suspense plot. Finally, POINT BREAK has a strong Romantic worldview with very strong pagan, politically correct, environmentalist, anti-capitalist elements along with plenty of PG-13 foul language.

(RoRoRo, B, PaPaPa, PCPCPC, EEE, AcapAcapAcap, FRFRFR, LLL, VV, SS, NN, AA, DD, MM) Strong anti-social Romantic worldview with some light moral elements but promoting a pagan, politically correct, environmentalist worldview that’s somewhat anti-capitalist, in the sense of the “Occupy Wall Street” type of activism, including gang leader talks throughout the movie about the earth as if it’s a living being and so basically idolizes earth and nature and gang leader is seen as admirable because of this kind of pagan environmentalism and activism, despite its illegal methods (a comment about being one with the earth or nature is also made); 29 obscenities (including one “f” word) and one light profanity, plus an obscene gesture; lots of action violence, sometimes with a little blood and bloody wounds, includes a couple fistfights, extreme sports action, motorcycle man falls to his death after landing wrong on a mountain, one major shootout and car chase, gang hijacks the back of a cargo plane and releases tons of cash to poor villagers below, men drive out the windows of a high-rise building after stealing diamonds, two men fall down waterfall, and [SPOILER ALERT] FBI agent lets gang leader commit suicide by riding a huge deadly wave and lies to his boss about it; briefly depicted fornication scene with implied nudity and some suggestive dancing; partial rear female nudity in scene where women wear skimpy bathing suits and bikinis, topless man and woman lying on top of one another, but scene cuts away before revealing anything explicit, and upper male nudity; alcohol use and lots of young people are drunk at a party on a huge yacht; smoking tobacco and marijuana use depicted; and, reckless stunts, stealing, robbing, multiple thefts, some apparent moral relativism, and lying.

POINT BREAK is an action thriller that follows an extreme-sports star named Johnny Utah, as he joins the FBI just in time to infiltrate a gang of environmentalist activists, who commit huge robberies in the name of their cause. POINT BREAK is a pointless, mediocre remake of a 1991 cult classic by the same name and has a strong Romantic worldview with very strong pagan, politically correct, environmentalist elements.

The movie opens with Johnny (Luke Bracey) and his best friend riding motorbikes atop an extremely treacherous mountain range. Johnny’s friend lands poorly after a jump and falls to his death before Johnny’s eyes.

Cut to seven years later with Johnny trying to get hired as an FBI agent, having completed law school in the intervening years. However, Johnny’s prospective FBI boss (Delroy Lindo) doesn’t think he’s committed enough and is too reckless for the job. Then, Johnny hears about a gang of thieves pulling off elaborate and massive heists at some of the world’s most exotic and dangerous locations. Johnny figures what their plan is and impresses his boss into sending him to France to infiltrate the gang and stop them.

The gang’s motivation is highly rooted in Romantic, politically correct ideas about the environment and the alleged wealth divide between the rich and poor around the planet. The gang will, for instance, rob $100 million worth of jewels from a Mumbai storehouse and then scatter them in the streets of Mumbai’s slums so that the poor can suddenly be rich when they grab the diamonds. In addition, throughout the movie, the gang leader talks about the earth as if it’s a living being, and, thus, idolizes the earth and nature.

Johnny impresses the gang with his wave-surfing skills off the coast of France. He’s taken under the wing of the gang leader, a man named Bodhi (Edgar Ramirez). As part of their clique, Johnny has ever more excitement and fun with the gang. He comes to believe that their motivations are at least somewhat noble, so he’s torn between bringing them down, or secretly letting them go.

This may sound like a fun plot, and the potential was there to be so. However, the 1991 cult classic upon which it’s based is much more impressive as an action movie and featured bigger stars Patrick Swayze and Keanu Reeves at the top of their careers. This movie’s lead, Bracey, is nearly devoid of acting talent here, so it’s hard to care about his character. Ramirez has shown charisma in other movies, like JOY, but that powerful presence is also largely missing here. The director and perhaps the script, not the actors, are most likely at fault.

The real problem, artistically speaking, however, is that, aside from the terrible, charisma-free acting, the story has long stretches where no one talks to each other. There is simply one outlandish stunt sequence after another, making the movie feel more like a travel or sports documentary rather than a tense thriller. Making matters worse, some of those stunt scenes have nothing to do with crimes, but are just fun hang-out scenes between the lead characters.

Morally and spiritually, this POINT BREAK has a very strong Romantic worldview that contends society is corrupt because of capitalist greed that destroys the environment and exploits or neglects poor people. The gang not only give away some of their loot to the poor, they also use it to promote environmentalist activism. Also, the gang leader’s pagan ideology, which includes talking about the earth and nature as if they’re living beings, is seen as admirable.

All in all, therefore, POINT BREAK is devoid of interest as an action movie and overloaded with pagan, politically correct, anti-capitalist environmentalism as well. It also has plenty of foul language, a bedroom scene and brief marijuana use. This deadly combination makes it a movie that most moviegoers, but especially media-wise viewers, will want to avoid.