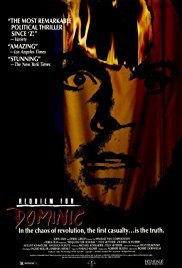 REQUIEM FOR DOMINIC is a tension-packed film which tells the true story of Dominic Paraschiv's personal struggle during the Romanian Revolution of 1989. REQUIEM effectively weaves exquisite cinematography with tantalizing music and actual historical documentary footage to graphically portray the depravity of man and the abuse of man's rule when he is not subject to God.

(L,NN,VVV) A few obscenities; government prisoners and victims of the Romanian revolution shown in the nude; and, graphic scenes of victims of violence.

REQUIEM FOR DOMINIC tells the true story of Dominic Paraschiv, played by August Schmolzer, a victim of the 1989 Romanian revolution. Defending his factory workplace from Ceaucescu’s secret police, Dominic waves a rifle and orders his fellow workers to recite a Latin prayer.

In the next scene, Dominic lies naked in a hospital bed with a bullet wound in his stomach. Confined by a large fish net, Dominic is branded “The Butcher of Temesvar” whom the government alleges was responsible for killing 80 of his co-workers.

Paul Weiss, played by Felix Metterer, is Dominic’s childhood friend who emigrated to Austria 30 years earlier. Paul doesn’t believe that Dominic murdered 80 people. Taking a group of Viennese humanitarians with him, Paul returns to Temesvar to see Dominic and find out what really happened.

In Temesvar, the oppressive Romanian government refuses to allow Paul to see Dominic. Evidently, the government is mainly interested in promoting scandalous stories about “The Butcher of Temesvar” in the state-run media. Soon Paul himself becomes a target of government intimidation and tyranny and is labeled a terrorist and a revolutionary.

REQUIEM FOR DOMINIC is a vivid picture of the Romanian regime under the brutal dictator, Ceaucescu, who tyrannically ruled Temesvar for four decades. The Romanian army eventually rebelled against Ceaucescu, and he and his wife were arrested and charged with the murder of thousands of Roman citizens.

The theme of REQUIEM is that love, kindness, tolerance, and passivity are superior vehicles of change as opposed to violence. This premise is biblical, and, as one modern theologian urged “regeneration not revolution.” However, it is not clear whether or not director Robert Dornhelm believes that the Romanian revolution of 1989 violated this premise.

The film indirectly hints at a spiritual motivation for change in Romania, with a pastor’s brief comment. Also, Dominic’s Latin prayer with his fellow workers is addressed to “Lord God” and “Christ.”

Overall, REQUIEM effectively weaves exquisite cinematography with tantalizing music and actual historical documentary footage. This tension-packed film is a graphic portrayal of the depravity of man and the abuse of man’s rule when he is not subject to God.