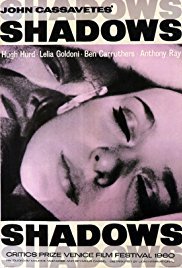 Family life is a dreary, black-and-white existentialist portrait in SHADOWS, the 1959 debut of director John Cassavetes. Cassavetes' fans may discover all sorts of meaning lurking in SHADOWS, but hopefully their eyes will reject its dark picture of life without God.

Family life is a dreary, black-and-white, existentialist portrait in SHADOWS, the 1959 debut of director John Cassavetes.

Lelia, Ben and Hugh are siblings living together in New York during the 50’s. Hugh, the oldest of the three, is a struggling black singer. Hugh’s brother, Ben, is a sluggard. Sister Lelia has aspirations of entering the literary field. They are mulatto.

Groping in life’s shadows, the siblings help Lelia through the interracial relationships in which she is involved. Dating three different men, Lelia loses her virginity to Tony on the first date.

SHADOWS is presented as improvisation, minus Hollywood’s glitzy trappings such as music, big names, or special effects. However, rumor has it that Cassavetes tightly scripted his works.

Cassavetes’ fans may discover all sorts of meaning lurking in SHADOWS, but, hopefully, their eyes will reject its dark picture of life without God. The characters in SHADOWS are fools, as the psalmist declares: “The fool has said in his heart,`There is no God.’ They are corrupt, and have done abominable iniquity; there is none who does good.” (Psalm 53:1-4).

In spite of the depravity portrayed in SHADOWS, the film upholds the dignity of man in a meaningless society, but ignores his innate sinfulness. Lelia, Ben, Hugh and Tony aren’t professing atheists, but this clearly declared by their actions and outlook on life. Truthfully, the siblings in SHADOWS need to be delivered from their darkness into the living hope described in 1 Peter 1:3: “Blessed be the God and Father of our Lord Jesus Christ, who according to His abundant mercy has begotten us again to a living hope through the resurrection of Jesus Christ from the dead.” (1 Peter 1:3).