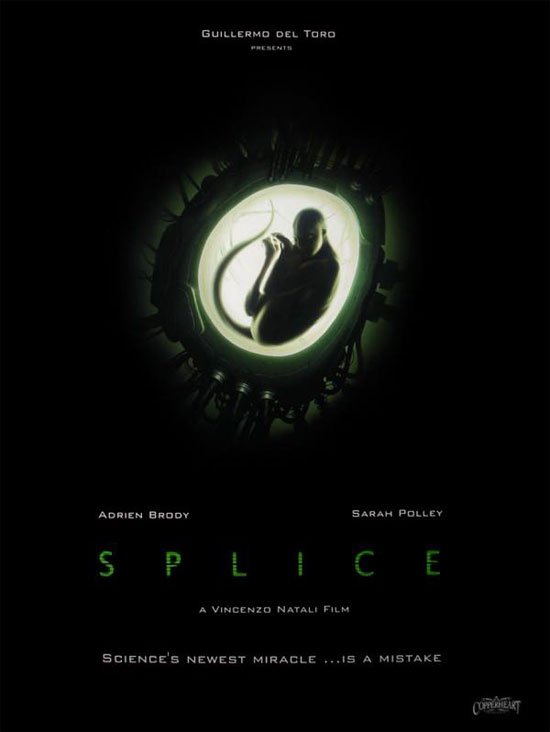 SPLICE is an R-rated horror movie dealing with current issues of genetic engineering and establishing moral boundaries. Two young Canadian scientists, Clive and Elsa, who also live together, disobey the law by secretly creating a new female creature with both animal and human genes. After seeing the human-like, but clearly animalistic creature, Elsa’s mother instincts take over. She convinces Clive that the creature is aging rapidly, so they may as well keep it alive until it dies. She begins treating the creature like her daughter, however. Even Clive gets wrapped up in this fantasy. Then, the creature becomes a curious teenager, leading to abhorrent sexual allusions, murder and rape.

SPLICE does bring up some important current moral issues regarding genetic engineering and cloning. It also wonders cogently at one point, if you break one moral boundary, doesn’t that mean you can break all the moral boundaries? Its plot, however, degenerates into silly situations and dialogue and involves some really abhorrent content. A better, less sensationalistic movie would have toned down the gratuitous explicit content, created a better script, and answered the moral questions it raises with biblical truth that inspires rather than titillates.

(PaPa, B, LLL, VVV, SS, NN, A, MM) Strong (but not propagandistic), somewhat deistic pagan worldview that brings up some valid moral questions about genetic engineering and crossing moral boundaries but also in an abhorrent manner plot-wise, with some moral questions discussed and some moral warnings sounded and some references to God, but mostly in the form of questions with an irrational streak, such as asking that, if God did not want human beings to mess with genes in a scientific lab, why did he give us the ability to do it (God also gives us the ability to torture infants for fun or commit adultery but that does not mean He wants us to do those things), plus an anti-vegetarian joke is made about modern young people and others who try to force their (often) unnatural and anti-scientific vegetarian beliefs on others; about 21 mostly strong obscenities (including many “f” words and one “f” word in end credits of music titles), four strong profanities and three light profanities; some very strong, often scary violence includes creature’s stinger cut off, two genetically created blobs kill one another in very bloody fashion after the female unexpectedly turns into a male, surgical knife starts to cut into human-like skin, violent rape scene, creature’s face is bloody as it eats a rabbit raw, creature kills man with stinger, images of a least two slightly bloody male corpses after creature kills them, creature kills cat with stinger, woman hits head and has small bloody wound on forehead, creature threatens people, etc.; strong sexual content includes two scenes of depicted fornication (one with upper female nudity), a depicted scene of rape, allusions to incest and bestiality and pedophilia, and two genetically created blob creatures exude flower-like extensions that touch together and people express awe at the power of “love,” plus unmarried couple has been living together for several years; shots of upper female nudity and upper male nudity and child creature’s rear-end; alcohol use; no smoking; and, cheating, scientists knowingly break genetic and clone laws and hide the resultant animal-human hybrid from their bosses and from the authorities, woman hides important information from her boyfriend, female scientist treats genetically created animal-human hybrid creature like her own daughter, allusions to woman’s past abuse by her strict mother who also did not provide a proper bed for her daughter or allow her to have any pets, and some discussions of moral questions and issues are not resolved in a positive way, much less an inspiring one.

The movie opens with two young Canadian scientists, Clive and Elsa, who also live together, creating a new species in the laboratory in order to create a new protein useful for medicine. They name their two new specimens Fred and Ginger, after the famous Hollywood dance team of the 1930s and 40s.

Clive and Elsa want to go to the next step, by combining the animal genes they’ve used with human ones. That would involve using some cloning techniques that are outlawed, however, so their bosses order them to stick with manipulating the animal genes.

Elsa pressures and goads Clive into secretly running an experiment on the side mixing human genes with the animal ones they’ve “perfected.” Using genes from a human female, they clone a human/animal hybrid. The unborn version of the creature grows at an alarming pace. Soon, Clive and Elsa have a little female human/animal hybrid, with a poisonous stinger. Elsa justifies keeping the creature alive because it probably will soon be dead since it’s growing at such an alarming pace.

On seeing the hybrid grow, Elsa’s mother instincts kick in. She dresses the creature in young female clothes and names it Dren (which is backwards for Nerd). Eventually, however, Elsa and Clive have to spirit the creature away to Elsa’s dead mother’s farm, to hide Dren from the authorities.

From there, SPLICE degenerates into a silly plot that involves abhorrent allusions to incest and bestiality, not to mention pedophilia or pederasty, and eventually includes a despicable rape scene. It also leads to violent murder.

SPLICE does deal with some important current moral issues regarding genetic engineering and cloning. It also wonders cogently at one point, if you break one moral boundary, doesn’t that mean you can break all the moral boundaries? Its plot, however, degenerates into silly situations and dialogue and involves some really abhorrent, despicable sexual allusions and content. The movie also contains an excessive amount of strong foul language and very strong, often scary violence. No way can MOVIEGUIDE® commend this movie to anybody, including people who like to see the more graphic horror movies like SPLICE.