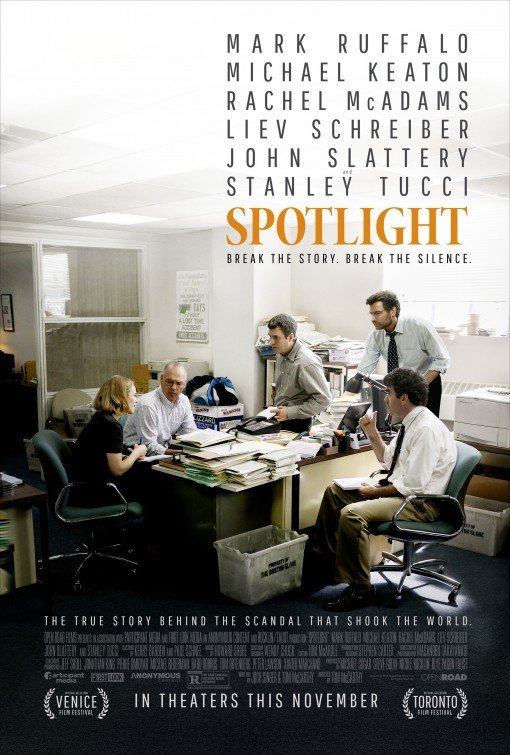 SPOTLIGHT tells the story of the team of Boston Globe reporters who exposed the Catholic Church’s sex-abuse scandals in Boston and then around the world. It focuses on the paper’s “Spotlight” reporting team, which handles the newspaper’s most extensive, complicated investigations. As the movie begins, the team’s leader, Walter “Robby” Robinson, is having dinner with new chief editor. Marty Baron. Baron is focused on making staff cuts and tells Robinson his team better find a hot story quick or risk being cut. The team soon encounters a man leading a group of Bostonians who claim to be sexual abuse survivors. As the reporters investigate these and other stories of abuse, the investigation takes a personal toll on their emotions and spiritual lives. SPOTLIGHT is an extremely well made, compelling movie. It shows the hard work that goes into investigative journalism and the effects a depressing story can have on those who report it. The filmmakers handle the difficult subject matter with as much taste and discretion as possible. That said, SPOTLIGHT has plenty of strong, gratuitous foul language, so extreme caution is advised.

(BB, Ho, Ab, C, LLL, V, SS, MM) Strong moral worldview about exposing evil and revealing truth in true story about a team of Boston Globe reporters investigating child/teenager abuse and cover up allegations in the local Catholic Church diocese that turn out to be a worldwide problem, but that also the police and the Globe itself also became involved in the cover up, with some allusions to homosexual abuse, plus some of the reporters describe themselves as “lapsed” Catholics with a couple of them being turned off further by the Church and by the men running it after reporting some terrible findings, and one reporter says he’s Presbyterian; 51 or more obscenities and profanities, including many “f” words and some strong GD and Jesus profanities; numerous mentions of priests having raped or molested or sought oral sex from boys and one girl, who have grown up to be psychologically and emotionally damaged and now seek justice (the descriptions are rather broad and general bit graphic, and the movie doesn’t wallow in their perversity and often fades out as the victims relate their stories of abuse); no nudity; no alcohol; no smoking or drug content; and, the cover-up of clergy sexual abuse involves police and one Boston Globe editor, not just clergy, and an editor tells an investigative team they better find a hot story or risk being let go from work.

SPOTLIGHT tells the story of the team of Boston Globe reporters who exposed the Catholic Church’s sex-abuse scandals in Boston and then around the world. SPOTLIGHT has a strong moral worldview extolling exposing evil and revealing truth, but it contains plenty of strong foul language and verbal references to the abuse that occurred, though not extremely graphic or lewd. Tackling the Globe’s major expose of the Catholic Church in Boston and beyond back in the early 2000s, SPOTLIGHT focuses on the paper’s “Spotlight” reporting team, which handles the paper’s most extensive, complicated investigations. As the movie begins, the team’s leader Walter “Robby” Robinson (Michael Keaton) is having dinner with a new chief editor, Marty Baron (Liev Schreiber).

Baron is focused on making staff cuts and tells Robinson his team better find a hot story quick or risk being cut. The team soon encounters a man leading a group of Bostonians who claim to be sexual abuse survivors. They allege they had been victimized by a particular Catholic priest as children. The man claims the paper ignored his evidence five years before, but Baron is new and wants the Spotlight team to jump on the investigation into these allegations. He asks them, however, whether they are Catholic or have a bias against the Church, and all four say they’re lapsed Catholics. One is now a practicing Presbyterian, while Sacha Pfeiffer (Rachel McAdams) considers herself lapsed but takes her devout grandma to Mass sometimes.

Robby and Michael Rezendes (Mark Ruffalo) nonchalantly note their lapsed status. Despite their lapsed status, the movie depicts the reporters as objective and unbiased. They make no Anti-Christian or Anti-Catholic comments during the movie, which makes it clear that it was men in the Church who caused the problem, not God Himself allowing it. As the reporters engage in trying to track down other abuse survivors and the priests who are accused of harming them, the investigation takes a personal toll on their emotions and spiritual lives. [SPOILER ALERT] For example, Sacha makes excuses to get out of bringing her grandma to church, leaving her to make it on her own. Meanwhile, Michael has the hardest time with it all, breaking down crying one night and saying he always felt bad about leaving the Church and wanted to go back to Mass, but now feels he has been betrayed nearly as much as the abuse victims. END SPOILER.

Intriguingly, SPOTLIGHT doesn’t just show the Catholic Church’s abuses in this matter and the cover ups, but also shows that there was an entire culture of corruption and cover ups across Boston, including the police and even one of their own editors. Everyone was afraid to take on an institution that was seen as representing God. The one Church official who comes off very negatively in detail is the former leader of Boston’s diocese, or church government, Cardinal Law (Len Cariou). Law is shown dismissing the problem and refusing to comment on the Globe team’s investigation, even when they find records showing he helped in a cover up that went all the way to the Vatican. SPOTLIGHT is an extremely well made, compelling movie, showing the hard work that goes into investigative journalism and the effects a depressing story can have on those who report it.

Director and Co-Writer Thomas McCarthy has made acclaimed movies like WIN WIN and THE STATION AGENT before, as well as the unfortunate disaster THE COBBLER, but he handles this movie and its difficult subject matter with as much taste and discretion as possible. The movie focuses on the moral corruption of dozens of priests and their higher leaders. It ends with a shocking list of other cities around the US and the globe where similar scandals were quickly discovered after Boston’s scandal was revealed. That said, SPOTLIGHT never appears to have a heavy agenda. Even the darkest corners of history can merit a movie, the filmmakers seem to be saying. As such, SPOTLIGHT does it as well and even-handedly as could possibly be hoped. Eventually, only six percent of Boston’s priests were accused (87 priests in total), which still leaves 94 percent not involved in the abuse. However, the movie does mention an estimate that 50 percent of Catholic priests are believed to be breaking their vows of celibacy, but most of those allegedly broken vows involve women.