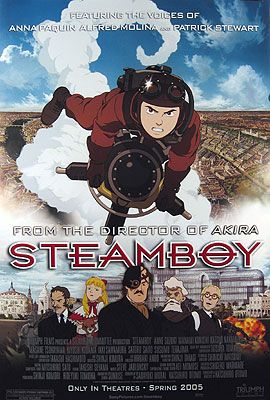 STEAMBOY is a Japanese cartoon in English about an English boy in 1866 born into a family of inventors. A group of men from the nefarious O’Hara Foundation kidnaps the boy, Ray, and a package from his grandfather containing a small steam ball, a source of unbelievable power with high-density, compressed steam. Ray wakes up to find that his father is in cahoots with evil men running the Foundation, which wants to sell new steam-powered weapons to the nations of the world, except England. Ray must decide whose side to take, his father’s or his grandfather’s. This is not easy, because the English government also wants to use his family’s powerful new steam technology to create weapons.

Reminiscent of Jules Verne, STEAMBOY is an exciting, sometimes visually stunning science fiction fable for older children and teenagers, especially boys. It has a strong moral worldview with some positive Christian content, as well as some anti-capitalist elements and a modern anti-war message that sounds a little pacifistic and politically correct. There is also talk about the Age of Science, but science and technology are seen as a dangerous tool that can nevertheless be used for good.

(BB, C, Anti-cap, PC, RH, L, VV, M) Strong moral worldview set in 19th Century England that talks about the dangers of science, with positive Christian references to Jesus and Christianity in one scene, such as Anglican priest says, “Our Lord Jesus” during ceremony, and positive redemptive content, including positive references to God, as well as some anti-capitalist statements about capitalists who want to use science only to make money and to sell advanced weapons of war, with science fiction elements prefiguring the bloody events of World War I, some politically correct pacifist statements, and revisionist history in a science fiction setting with futuristic weapons in Victorian England, including change in date for the first Great Exhibition at the famous Crystal Palace in London in 1851, which is changed to 1866 (the Crystal Palace was eventually destroyed by fire in 1930); light foul language such as “What the Devil!” is said twice, “How in God’s name” is said once, “My God” is said once, and “Good God” is said once; lots of mostly bloodless cartoon action violence with some scary machines and war weapons, including machine explodes, machine crashes into house, villains threaten family and boy with guns, villains fire rifle at boy, villain tries to kill boy with large steam-powered machine similar to a forklift, dangerous high-speed chase involving villains in steam-powered train without tracks, steam from gigantic flying castle freezes parts of London, large steam-powered legs squash two multi-story buildings, small armies battle, gunships fire, armored soldier hit and girl sees small bloody wound and blood pooling under soldier’s head, flying armored soldier crashes through window, boy protects girl from flying glass, machines crumble and explode, man shot in leg, and steam strikes people but nothing gory is shown; no sex; no nudity; no alcohol; no smoking; and, talk about the Age of Science approaching as the West undergoes the Industrial Revolution, hero’s father is a complex character and family torn apart by disagreement.

The American Civil War from 1861 to 1865 was the first example of modern warfare of the Industrial Revolution in the 19th Century. The battlefield deaths and destruction from that war prefigured the awful trench warfare of World War I.

After a mysterious prologue, the movie opens in Manchester, England, where Ray Steam anxiously awaits the return of his grandfather Lloyd and his father Edward, who went to America to complete their research on new kinds of steam engines. One day, a package arrives from Lloyd. The package contains a small device called a steam ball, a source of unbelievable power containing high-density, compressed steam. A note from Lloyd tells Ray not to give the steam ball to anyone but Dr. Stephenson, a scientist working with the English government.

No sooner does Ray open the package but two sinister men from the O’Hara Foundation come to take the steam ball. A terrific chase ensues, but the men eventually kidnap Ray and the steam ball. Ray wakes up to find that his father is in cahoots with evil men running the O’Hara Foundation, which wants to sell new steam-powered weapons to the nations of the world, except England. Ray’s father has constructed a gigantic Steam Castle in London, near London’s scientific exhibition hall, where the Foundation plans to display the war weapons to the world governments. The heir to the Foundation is a conceited girl named Scarlett who develops an affection for Ray.

As Ray’s knowledge of the Foundation’s plans, and of his father’s own plans for the Steam Castle, grows, Ray must decide whose side he should take. This is not easy, because the English government also wants to manufacture steam balls to create powerful new weapons of war. As the English government literally battles the O’Hara Foundation in London, Ray must quickly determine how to save the situation, help his grandfather and perhaps redeem his father.

Well animated with complex steam engines and steam-powered machines with many giant gears, STEAMBOY is an exciting, at times visually stunning science fiction fable for older children and teenagers, especially boys. Otomo has created a unique, but familiar, vision that reminds one of some of the machines created by Jules Verne in his 19th Century science fiction works. STEAMBOY has an old-fashioned sensibility and, therefore, may be a good introduction to animated Japanese cartoons with lots of action for families. Except for some of the action violence and scary machines, the rest of the movie could have been rated G or PG instead of PG-13.

STEAMBOY has a strong moral worldview. It talks about the dangers of science and sends a warning about the evils of wars like the American Civil War and World War I. There is even some positive Christian content in the form of an Anglican priest who talks briefly about Jesus during a ceremony featuring the Queen Victoria.

Moviegoers should know, however, that the movie contains a lot of mostly bloodless action. In addition, the hero’s father has been injured by a steam explosion and has a mechanical arm and metal plate on his head.

STEAMBOY also has some anti-capitalist elements and a modern anti-war message that sounds a little pacifistic and politically correct. There is also talk about the Age of Science that began in the 19th Century and that grew so powerful in the 20th Century. By the end of the movie, the boy hero has gained a more mature understanding of the benefits and dangers of science. Some images over the end credits imply that the film’s creator has a lot more stories to tell about Ray and Scarlett. The movie suggests, for example, that Ray grows up to use the steam-powered jet propulsion pack he develops in the movie and that Scarlett grows up to become the leader of her family’s foundation.