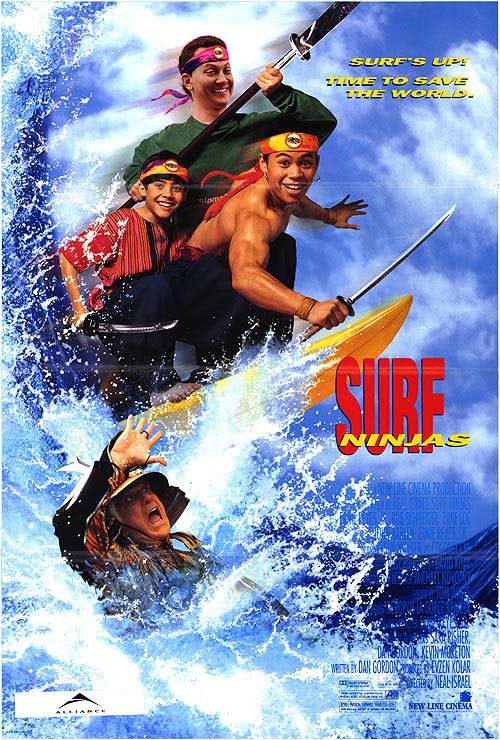 In the film SURF NINJAS, two teenaged brothers and their best friend have their lives radically altered when foreign ninjas kidnap their adopted father and try to kill them. Sometime later the boys fulfill their destiny as royal princes from the Isle of Patusan, now in the hands of an evil dictator. SURF NINJAS contains 90 minutes of low-grade humor, violent action and bad acting.

(L, M, VV, NA) Approximately 3 obscenities & no profanities; plots of revenge & murder; martial arts fights with the use of chains, knives & swords; mechanical hand grabs genital area during fight; and, pagan religion taught to characters to give them the "power of warrior kings."

SURF NINJAS follows the lives of two teenaged brothers and their best friend whose ordinary lives as beach bums in Southern California are radically altered when foreign ninjas kidnap their adopted father and try to kill them. The only reason they aren’t killed is due to a mysterious figure who tells the brothers the true nature of their noble ancestry. The boys discover they are royal princes from the Isle of Patusan, and religious prophets have foretold that they will overthrow Colonel Chi, an evil dictator who has ruled the island ever since a military coup many years ago. After a series of fights and adventures, the brothers ultimately “fulfill” their destiny by returning to Patusan and recapturing their homeland for their people. In the final battle, Colonel Chi and his hateful ninjas are destroyed, while the brothers become the true warrior kings they were destined to be.

The movie is as awful as its tacky title suggests–90 minutes of low-grade humor, violent action and bad acting. The comic talents of Leslie Nielsen are completely wasted in his stilted performance as Colonel Chi since the script never allows him to be funny. However, the real blame for this film belongs with the director, the writer and the producer, since their product fails to deliver much of anything, including surfing, of which there is little.