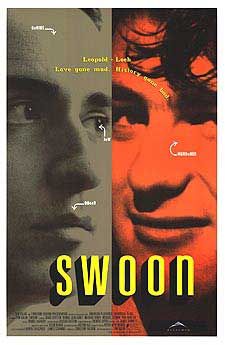 SWOON examines the notorious 1920’s case of Richard Loeb (Daniel Schlachet) and Nathan Leopold (Craig Chester), two Jewish, sodomite intellectuals who murder a 14-year-old boy from Chicago’s Hyde Park. As the case draws public attention, the press relates Leopold and Loeb’s criminal activity to their privileged upbringing, Jewish background and homosexual relationship. Ultimately, the men’s sodomy is used by defense attorney Clarence Darrow as proof of their insanity and spares them from the death penalty. Using archival footage, courtroom testimony and recreated dramatic scenes, SWOON attempts to read the case of Leopold and Loeb against the social definitions and possibilities of homosexuality in the 1920s. The movie is filmed entirely in black and white, and spotlights the protagonists in explicit bedroom scenes that are bound to repulse the average moviegoer. They switch master/slave sex roles with time-warping theatricality, and serve drinks to a gang of transvestite men dressed as women.

SWOON is an extremely dark film that depicts homosexuality in a favored light and is funded in part by your tax dollars through the National Endowment for the Arts. Please call President Bush at (202) 456-7639 (the Public Opinion line) to complain.