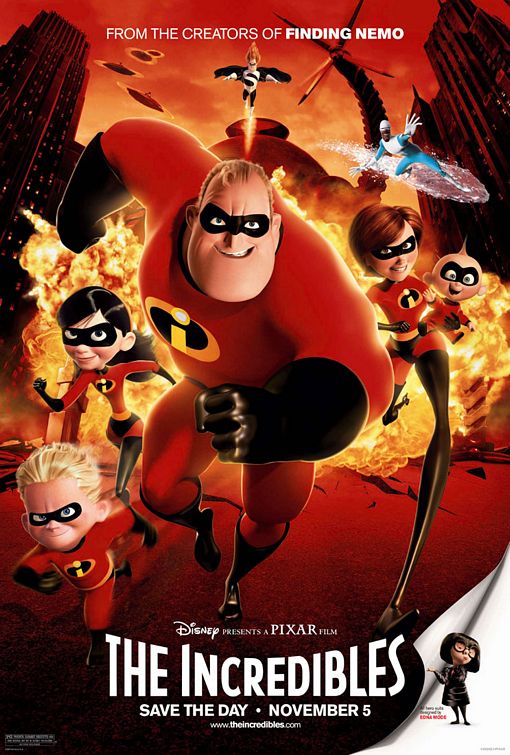 THE INCREDIBLES is another incredible animated movie from Pixar and Disney. It opens by introducing several superheroes, including Mr. Incredible, a superhero uncomfortable with his celebrity. Because of his superhero duties, Mr. Incredible gets to his wedding with “Elastigirl” a little late. Fifteen years later, he and Elastigirl have retired under a government protection plan. Bob and Helen now have a family with two boys and one teenage girl. Their hectic family life is interrupted by a villain who calls himself Syndrome. Syndrome has killed off many of the superheroes around the world, and now he is targeting Bob’s family. Battling this villain becomes a family affair.

Beautifully animated, THE INCREDIBLES is full of exciting energy and fantastic fun. Although it’s rated PG because of action violence, it’s also a strong family drama with lots of terrific humor. There are many moral lessons to take away from this redemptive, inspirational movie, which contains a strong Christian worldview. The filmmakers celebrate the good and rebuke the bad. The story and characters are also fully realized. THE INCREDIBLES is the best family film so far this year. Parents, grandparents and children alike will love it.

(CCC, BBB, L, VV, A, M) Very strong Christian worldview and very strong moral messages with self-sacrifice, primacy of family, love for spouse, compassion for children, remorse and repentance, and an overt church wedding; three exclamatory My God’s; lots of action violence with some cartoon characters dying and some intense scenes, including everything from fights to explosions to harrowing escapes to beatings by vicious machines to getting caught in a jet stream, but more action-oriented than violence-oriented; some kissing and hugging by family members; no nudity; alcohol use; no smoking; and, husband lies to protect family but later repents.

Brad Bird wrote and directed the phenomenal movie IRON GIANT. Now he has brought his talents to Pixar to produce an extraordinary movie, THE INCREDIBLES. This movie is not only a strong action-adventure superhero story; it’s also a strong family drama with lots of terrific humor. It supports the good and rebukes the bad.

The movie opens on a TV interview of some superheroes. One of them, Mr. Incredible, is humorously uncomfortable with the interview format. Clearly, although he’s a superhero, he’s not perfect. In fact, on the way to a very important appointment, several superhero tasks – from saving a cat in a tree to stopping a bank robbery – sidetrack him. One young boy named Buddy, with an incredible gift for creating superhero devices such as flying boots, tries to become Mr. Incredible’s sidekick during these diversions. The superhero brushes him off and sends him home. Delayed by his heroic activities, he gets to his wedding with “Elastigirl” a little late.

Soon thereafter, people start suing these superheroes. One in particular sues Mr. Incredible because he saved him from committing suicide. Soon, the whole country wants the superheroes to stop meddling in their affairs.

Fifteen years later, the superheroes have all retired under a government protection plan. Mr. Incredible is now Bob Parr, an insurance adjuster who’s bored with his job, out of shape and overweight. His wife, Helen, is no longer saving the world with her elastic powers, but trying to stretch herself into every direction to take care of her family. Their teenage daughter, Violet, is shy and has the gift of disappearing, whereas their 10-year-old son, Dash, is a bundle of energy. Finally, their baby Jack is a bundle of potential. Although these are cartoon characters, their family problems are extremely real and very funny.

Fired from his job for the umpteenth time, Bob gets a call from a beautiful femme fatale named Mirage to save the world. Behind this call is a villain named Syndrome. Syndrome is Buddy, all grown up, whose resentment at not being accepted by Mr. Incredible has boiled over into revenge. He has killed off many of the superheroes around the world, and now he is targeting Bob’s family. When Bob falls into Syndrome’s trap, Helen and the children have to come to the rescue, and, for the first time, Helen has to tell her children to use the superpowers that she’s always told them to hide.

THE INCREDIBLES is an animation tour de force. Like every Pixar movie, it breaks new ground with its lifelike hair and human figures. What makes this a great family film, however, is not the animation, but the attention to story and character. This is a prerequisite for every Pixar movie. The characters are so clearly drawn that my teenage daughter saw herself in Violet, my wife saw herself in Helen, and I’m embarrassed to say I saw some of my flaws in Bob Parr. Bravo!

The action adventure story is extremely fast paced and compelling, just as exciting as any James Bond or X-Men movie. Brad has hidden a lot of derivative clues throughout the movie, so there are references in the animation, the sets and the music, to the great classic superhero and spy movies. This fact alone will attract audiences to come back again and again, to see if they will identify the references.

For churches that use movies for preaching, there’s a lot of inspiration in THE INCREDIBLES. Bob has to learn to apologize and to come to grips with things more important than being a superhero, including the most powerful force among men – the family. There are many moral lessons to take away from this movie. Whereas FINDING NEMO, another great Pixar movie, was totally original, THE INCREDIBLES is consciously derivative. And, both set the bar for animated movies a little higher.

There is a caution for children (which is why it’s rated PG), because some of the action violence involves people getting hurt, and even dying. This was a conscious decision by director Brad Bird. Frankly, I asked him if he had asked for the rating, and he said yes. This could have been, and probably should have been, rated G. For, it is a very minor caution. From our studies of the success of movies, I believe they should have rated this movie G. Once upon a time, the Billy Graham Association asked for a PG for THE PRODIGAL. The Executive Producer now admits it only limited their audience. THE INCREDIBLES will do extremely well, but the PG probably will trim some of its box office success, unnecessarily.

Even so, THE INCREDIBLES is a great movie. It’s the best family film so far this year. Parents, grandparents and children alike will love it. It is incredibly fun and thrilling. My children loved it, and I do, too!

Rent or Buy THE INCREDIBLES: