THE LEAST AMONG YOU 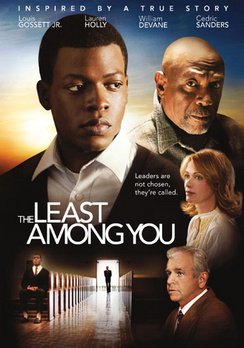 HE LEAST AMONG YOU is a powerful, compelling drama based on a true story about a young African-American who serves probation time at an all-white seminary corrupted by racism. Though initially determined to merely serve his two semesters then pursue his dream job, Richard soon finds his selfish dreams might be replaced by a God-given destiny. After befriending the school’s black custodian, Richard learns that demons from his past and fears about his future can be conquered with unwavering faith in Christ.

THE LEAST AMONG YOU extols many biblical principles, including forgiveness, trust in God no matter the circumstances, walking by faith and not by sight, casting out fear with love, and surrendering our personal desires to an almighty, omniscient Lord. Bible verses are quoted throughout the movie. Christian images, such as crosses and people praying, further underscore the movie’s Christ-centered focus. Some scenes of violence and a minor drug reference require caution for young audiences. THE LEAST AMONG YOU is an inspiring, stirring movie about the power of faith to overcome obstacles, from within and without. Supporting its talented younger actors are several veterans who lend much gravitas.

(CCC, BBB, VV, N, AA, DD, M) Very strong Christian, moral worldview that focuses on the power of faith over fear and the beauty and truth that can be revealed through pain, with Bible verses quoted throughout to prove the faithfulness and undying promises of God, prayers, prophecies and visions underscore the presence of the Holy Spirit in Christian characters lives, honesty and integrity prevails over lies and corruption, and main character encouraged to surrender his fears and trust that Jesus Christ has a plan for him; no foul language; strong violence when main character is bullied by classmates and punched severely by an angry thug, and in scene in which drug dealer and club owner shoot each other; no sexual content; brief upper male nudity in the dormitory showers; alcohol use and main character has a hangover after he drinks when two friends are shot and a former alcoholic mentors a young man; smoking and drugs are shown but not sold in one scene with a rebellious drug dealer; and, racism and a belief in relative truth but they are rebuked.

THE LEAST AMONG YOU is a wonderful, inspiring, Christ-centered movie based on a true story of a young African-American man’s journey to fulfill his calling at an all-white theological seminary.

Richard Kelly has been wrongly imprisoned for the assault and battery of a police officer at the infamous Watts Riots of 1965. After agreeing to a plea bargain, Richard must serve two semesters of probation time at an all-white seminary, something his mother was rooting for well before his arrest.

O stepping foot on the campus, Richard faces the perplexed stares, cynical opposition and even violent confrontation of his new schoolmates. He quickly finds a loyal friend in his Texan roommate, who proves to him throughout the story that not all southerners are racist.

Summoned to meet with the school’s president, Alan Beckett, Richard is promised a strong ally – a “silent advocate” – in Beckett if he will do his best to excel as the first African-American to attend the seminary. After agreeing to be a type of Martin Luther King, Jr. for the seminary, Richard meets the school’s custodian and gardener, Samuel Benton, as he digs for discarded books in the dumpster. Samuel, a former alcoholic, immediately takes Richard under his wing, assuming the role of spiritual mentor in the young man’s life.

Richard continues to face conflict after conflict as he tries to fit in peacefully and serve his time painlessly. He is provoked to act violently in the communal bathroom when one peer implies the showers should be segregated. Desperate to obtain $5,000 for his mother’s dialysis, Richard becomes entangled in a botched drug deal that leaves two men dead, one of whom is his close friend, Roscoe.

Beckett urges Richard not to fight because that is what the other students expect. He desires for a wealthy financier to see Richard as a leader so he will donate the funds for a new media center. Thus, it quickly becomes apparent that Beckett’s interest in helping Richard is less than noble.

Discouraged and disheartened, Richard prays that God will help him make his grades so he can return to pursue the job of his choice. However, his description of a troublingly gruesome dream indicates his innermost spiritual desires. Beckett’s wise and godly wife tells Richard the “Holy Spirit has to inhabit more than your mind.”

After Beckett assigns a white, female professor to help Richard lead the student body away from the status quo of underlying racial tensions, Richard realizes that Professor Allison is haunted by her past as a missionary in Africa. Embittered by her experiences, she now believes that “truth is relative” and drowns her memories in alcohol. Over time, the ice begins to thaw around Professor Allison’s heart as she sees the passion and sincerity at the core of Richard’s academic and social endeavors. She begins to work proactively on Richard’s behalf and obtains the school’s by-laws. She and Richard discover that the school’s policy can be amended if he acquires the signatures of 70% of the students and faculty.

Beckett, however, believes Richard’s petition is jeopardizing the funding of the coveted media center and goes about threatening all those involved in bringing a new school policy to fruition. Not only does Samuel’s job hang in the balance, but Richard faces prison time when Beckett learns of Richard’s true reasons for originally applying to the seminary. Richard must choose to continue walking in faith toward a goal he believes in or surrender in the face of black-hearted threats and taunting fears.

THE LEAST AMONG YOU has a very strong Christian worldview and clearly conveys each individual’s need to surrender their lives to God and trust Him to see them through the darkest valleys. There is, however, brief strong violence, some smoking, alcohol use, and an attempt to sell drugs that is rejected, so caution is advised for younger children.

Rent or Buy THE LEAST AMONG YOU: