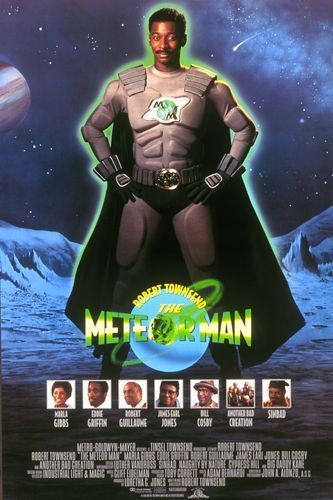 THE METEOR MAN is a creative and energetic story about Jefferson Reed, a teacher hit by a magical meteor and transformed into a superhero gifted with super-powers and the motivation to help his inner-city neighbors learn to help themselves. The movie is funny, uplifting and clean, with no foul language, very little sexual content and some violence which earned it the PG-13 rating.

THE METEOR MAN is a creative and energetic story about Jefferson Reed (Robert Townsend), a school teacher hit by a magical emerald meteor and transformed into a superhero gifted with super-human powers and motivation to help his inner-city neighbors learn to help themselves and find the true meaning of courage. As his newly acquired Superman-like abilities are made known, Reed becomes the hero of Castle Hill, a Washington, D.C. suburb plagued by gangs, drugs and violence. Resolved to help clean up the neighborhood, Reed (as Meteor Man) ventures into the most troublesome areas, taking on gangs and drug-lords alike.

The quality of writing and overall sensitivity of the movie is quite revealing. After the final scene, audience members walked out of the theater with smiles on their faces. There are some violent scenes, however, and a caution is noted for children under 13. However, the movie is basically clean, with no foul language and very little sexual content. The humor is basic, laughable comedy, not the usual scatological humor found in most comedies today. The high point of the movie, though, is the message that Townsend sends to our youth: It is time to get straight and reclaim our neighborhoods for our families. THE METEOR MAN sends a valuable message that young people need to see.