THE SECRET OF KELLS 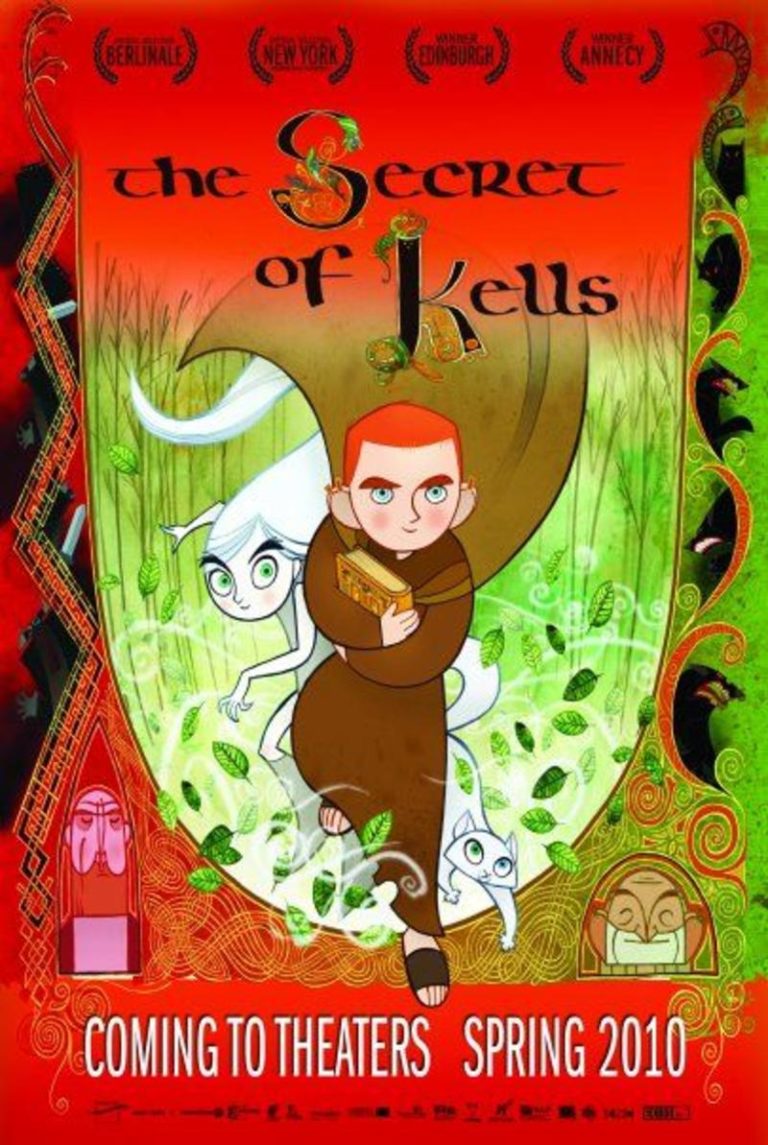 THE SECRET OF KELLS is an absolutely fabulous, delightful animated movie. It tells the story of Brendan, a young Christian monk in the Abbey of Kells. Brendan is sent into the woods to gather berries that produce a beautiful green ink for an illustrated Latin manuscript of the four New Testament gospels. There, he befriends a mysterious girl named Aisling, who helps him find the berries. When he returns to the Abbey, an old monk tells him he is to animate the Chi Rho page showing the glory of Jesus Christ. To do so, he must find a special magnifying glass in the woods, guarded by a terrifying monster.

THE SECRET OF KELLS is so beautifully done that it will make you cry in places. One can only imagine the faith of those who made it. It is a deep faith informed by a full-orbed Christian theology. The wolves and Viking raiders may be a little scary for younger children, but the presentation is much milder than what one would see in a normal Saturday cartoon. The section where Brendan confronts his fears is breathtaking. THE SECRET OF KELLS is a masterpiece.

(CCC, BBB, Pa, V) Very strong Christian, biblical worldview with some Irish pagan mythology but presented from a Christian perspective, with many Christian symbols woven into the text and a victorious view of Christianity; no foul language; scary wolves attack, scary monster but not seen in a scary way rather more like animated text drawing, Vikings attack, shot with arrows and stabbed with swords, but no blood and very stylized; no sex; no nudity; no alcohol; no smoking; and, nothing else objectionable.

THE SECRET OF KELLS is an absolutely fabulous, delightful, fanciful animated movie about young Brendan who lives in the Abbey of Kells, where he becomes the great illuminator of the Book of Kells. The Book of Kells is a famous illuminated Latin manuscript containing the four Gospels of the New Testament combined with beautiful illumination.

In the story, Brendan is an orphan being taken care of by his uncle, the Abbot of Kells. His uncle is building a great wall around the community in order to protect the people, in particular Brendan, from the Norsemen. The Abbot has lost sight of the importance of the work the monks do in copying the Bible. So, he has them all working on the wall.

One day, St. Aidan arrives at Kells, having fled the Norse destruction of the Island of Iona. He carries with him the famous illuminated manuscript. The manuscript is supposed to be so powerful that, when sinners look at it, they fall down. But, the most powerful page that turns dark into light, the Chi Rho page, has not yet been written.

St. Aidan sends Brendan into the woods to find the berry of the oak tree that produces a beautiful green ink. Brendan has been told by his uncle, the abbot, never to go into the woods. There, he is confronted by wolves. When he prays, he meets a mysterious young girl named Aisling, who becomes his friend and helps him find the berries.

When Brendan returns to the Abbey, Aidan tells him he is to animate the Chi Rho page. Brendan has to go into the woods to find the special magnifying glass, or third eye, to produce the beautiful, illuminated Chi Rho page. Brendan’s uncle locks him in the tower, however, to prevent him from going back into the woods. Aisling helps Brendan escape the tower, and Brendan goes into the woods to face the monster to get the magnifying glass. He triumphs and returns, only to find the Norsemen attacking the Abbey of Kells. They shoot and stab the Abbot, and the question is whether Aidan and Brendan can survive with the book that turns darkness into light so they can give the book to the people.

THE SECRET OF KELLS is one of the most uniquely animated movies of all time. It looks like an animated illuminated manuscript. It is absolutely beautiful and fanciful. Sometimes it is breathtaking.

The movie draws on the history of Christianity in Ireland and Scotland, some of which is hagiography and perhaps fanciful. Even so, it serves a great purpose of stressing how important the Bible is.

For those who know that the Chi Rho is the Christogram for Jesus Christ and the Book of Kells is the Gospel that turns darkness into light, THE SECRET OF KELLS is a triumphant story, much like THE BOOK OF ELI without the violence. It makes the wonderful point that we are not just to guard the Bible but live by it and give it to others. The movie operates under the New Testament vision that Christians are in the process of redeeming all Creation, including the wolves, the Vikings, the mysterious monsters, and the fairies. Brendan prays and tells Aisling that we are not supposed to be afraid of the dark because the Light has triumphed. The vision of this movie is appropriate at this time. Surrounded by pagans, Brendan and Aidan would not let the light of the Gospel go out. They had the eternal hope of the real Chi Rho, Jesus Christ.

THE SECRET OF KELLS is so beautifully done that it will make you cry in places. One can only imagine the faith of those who made it. It is a deep faith informed by a full-orbed orthodox theology. The wolves and Viking raiders may be a little scary for younger children, but the presentation is much milder than what one would see in a normal Saturday cartoon. The section where Brendan confronts his fears is breathtaking. THE SECRET OF KELLS is a masterpiece.

Rent or Buy THE SECRET OF KELLS: