THE YEAR OF THE COMET 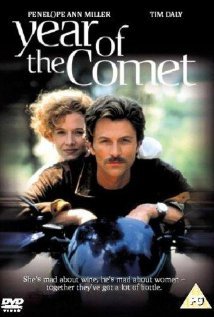 In the YEAR OF THE COMET, Maggie, a London wine-merchant's daughter discovers a rare 1811 wine in a hitherto unexplored wine collection. When the bottle is stolen, Maggie and another wine buyer pursue the thieves to the French Riviera and, the two, despite earlier animosities, find themselves inexplicably drawn to each other. YEAR OF THE COMET is another of those films which focuses on Hollywood's version of love, which in reality is nothing but lust.

In the YEAR OF THE COMET, a London wine-merchant’s daughter, Maggie Harwood, discovers the rarest wine in the world in Scotland, bottled in 1811, known as the Year of the Comet. Too soon, however, Maggie has an unpleasant encounter with dashing Oliver Plexico, sent to purchase the wine. Then, the murderous Philippe, who believes the wine holds the secret to eternal youth, steals it from under their noses. Maggie and Oliver, despite their mutual dislike, are forced to pursue the rare vintage–together. After they retrieve the bottle, they spend the night in separate rooms. Maggie insists that she is not interested in Oliver. However, she soon gives in and sleeps with him. The thieves manage once more to steal the wine, and the chase is on again. At film’s end, through a humorous turn of events, the couple retrieves the wine and celebrate, using the rare wine for a toast.

YEAR OF THE COMET turns out to be another of those films in which the hero and heroine can’t stand each other, but through propinquity, are thrust together until by film’s end, they find themselves madly in love–Hollywood’s version of love, that is, which in reality is nothing but lust.