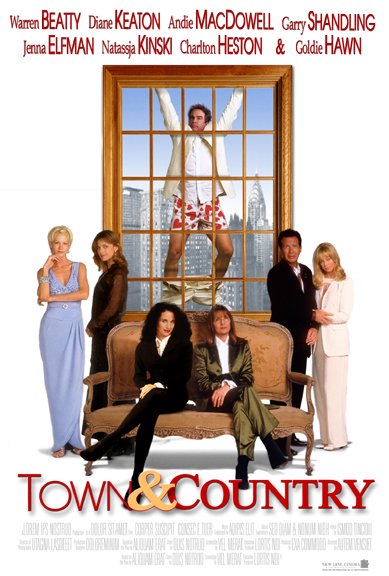 TOWN AND COUNTRY is a sex farce set in the rarified atmosphere of the nouveau riche in New York and Long Island. Warren Beatty plays a philanderer named Porter. After his friend Griffin is discovered having an affair, Porter has an affair with Griffin’s wife, played by Goldie Hawn. Porter’s own wife, Ellie, played by Diane Keaton, finds out Porter is also having an affair with a cello player. Affairs and complications multiply. Everyone involved in these sordid dalliances comes together for the final confrontation.

The message in TOWN AND COUNTRY is that no one can exercise self-control, so everyone should forgive everything and live happily ever after. Of course, this message overlooks the real pain and suffering caused by this self-destructive behavior. Aside from the important fact that TOWN AND COUNTRY is really sans nobilité, it is a mess as a movie: the storyline is convoluted and dull; the dialogue is witless; the acting is mediocre; the direction is pathetic; the lighting is flat; the sets are ill-conceived; and, these are just a few of the problems. The studio spent three years trying to fix this movie. They should not have bothered.

TOWN AND COUNTRY is a sex farce set in the rarified atmosphere of the purportedly nouveau riche in New York and Long Island. The word that high society uses to describe people who don’t understand their culture is N.O.C., an acronym for Not Our Class. In spite of its pretensions, TOWN AND COUNTRY is N.O.C. The whole purpose of this sex farce is to suggest that everyone, no matter how sinful, is basically okay and should be forgiven for their perverse dalliances.

The movie opens with Warren Beatty as Porter lying in bed watching Alex play the cello while nude. In his mind, Porter says he shouldn’t have had this affair.

When he goes home to his luxurious apartment on Park Avenue, he finds his son with live-in girlfriend Hallie, who is a contemporary hippie, his daughter with her live-in boyfriend Omar, who can’t speak English, his maid Yolanda with her live-in boyfriend Alejandro, who is member of a Central American revolutionary death squad, and finally his wife, Ellie, played by Diane Keaton, who is oblivious to the den of iniquity around her.

Porter’s dalliance is overlooked when Mona, played by Goldie Hawn, discovers that her husband and Porter’s best friend, Griffin, is having an affair with a transvestite. Mona is incensed. Ellie suggests that Porter accompany Mona to her plantation in Mississippi to help her sort out her problems.

Porter and Mona commit adultery in Mississippi. Mona flies back to New York, and Porter follows, chasing her out to her Long Island home. In the process of telling her that they should just cover up the whole thing, they start fornicating again, at which point Ellie shows up. Porter hides, just in time, upstairs with some signs of his presence left behind on the couch. While Mona and Ellie are talking, Griffin shows up for some of his clothes, initiating the usual sex farce which-closet-is-the-man-hiding-in scene.

At this point in the theater, an 8-year-old girl in the audience went out to get popcorn. One wonders what scripts of behavior this awful movie was implanting in this child’s mind.

Ellie informs Mona she has found out that Porter was having an affair. As Mona starts to panic, Ellie mentions that someone said the affair was with a cellist. Quickly Mona’s fear of being found out by her best friend turns to fury that Porter would be committing adultery with anyone else.

Ellie and Mona go back to New York City to confront Porter. When Porter gets back to his apartment in New York, they are waiting for him.

Estranged from their wives, who are initiating divorce proceedings, Porter and Griffin fly to Griffin’s cabin in luxurious Sun Valley, Idaho. Griffin wants desperately to tell Porter that he is a homosexual. In the process of his trying to break the news, some strange innuendoes pass between them with each misinterpreting what the other is trying to say.

Porter goes to a Halloween Party in Sun Valley with a local girl and is caught by his son in a compromising position. He next takes up with the daughter of a right-wing lunatic played by Charlton Heston. Heston walks in on his daughter and Porter and challenges Porter.

Porter realizes he loves Ellie and goes back to New York to tell her. Heston follows Porter to New York with a shotgun. All the women and men in Porter’s life end up at the Institute of Design in New York City for the final confrontation.

The message in TOWN AND COUNTRY is that everyone is sinful and no one can control his or her sexual predilections, so everyone should forgive everything and live happily ever after. Of course, this is not a point worth making. Unlike these nouveau riche individuals, most people have to live with the consequences of their actions. Usually, the wife who has to support the children after the divorce and ends up impoverished. Easy for these dilettantes to mouth empty platitudes. The real question is, will they repent and turn to the only One who can deliver them from their egocentric activities which hurt other people, including those who may be watching this sex farce?

Perhaps, the only honest moment in the entire movie is when Mona tells Griffin that she bought and wore revealing lingerie to please him. Little did she realize, as Dr. J. Reisman has noted, that by doing so she was cultivating his egocentric homoeroticism. If she had wanted to keep him, she would have modeled her life after the virtuous woman in Proverbs 31.

Aside from the important fact that TOWN AND COUNTRY is really sans nobilité, it is a mess as a movie: the storyline is convoluted and dull; the dialogue is witless; the acting is mediocre; the direction is pathetic; the lighting is flat; the sets are ill-conceived; and, these are just a few of the problems.

The studio spent three years trying to fix this movie. They shouldn’t have bothered.