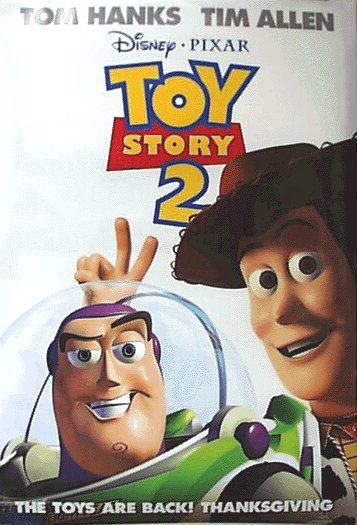 TOY STORY 2 is a great-looking, very entertaining movie that parents and children will want to see. Buzz Lightyear and other toys rescue Woody who has been stolen by a toy collector. Great story elements include love, compassion, forgiveness, and reconciliation. The story builds jeopardy without stressing evil. This is the type of movie you would like to keep for infinity and beyond!

Very moral redemptive worldview with some Christian references such as "God Bless You," a reference to the prodigal son's return & an emphasis on loving one another & giving up one's life not only for one's friends but also one's enemies; no foul language but one airline baggage sticker on a toy's derriere says "Butte" (as in Butte, Montana) but the "e" is partially obscured, & one flatulence joke; Mr. & Mrs. Potato Head® enjoy kissing each other, & some romantic references but no objectionable sexual content; some action cartoon type violence including a battle with Emperor Zurg (although all the weapons are harmless), plus some perilous situations including elevator shaft, traffic accidents while toys try to get across street & airplane danger; no alcohol; no smoking; and, stealing & deception by villainous characters, but generally great content.

It would be very difficult to be too enthusiastic about TOY STORY 2. In a year when filmmakers seem to have forgotten how to structure a good story, TOY STORY 2 shocks and entertains us by doing just that. Built on one of the most seemless, well-crafted story structures in recent memory, TOY STORY 2 is a truly great, entertaining movie that parents should want their children to see. In fact, parents and other discerning adults should want to see this movie for themselves. In most cases, such a stirring recommendation is dangerous since it will raise expectations unrealistically. However, in this case, TOY STORY 2 is so well-crafted it is doubtful that anybody will be disappointed.

Just when filmgoers think they are going to get a familiar retread of TOY STORY, they get a heart rending movie that actually avoids some of the objectionable elements in the original such as the vicious Sid and his grotesque creations. Even the meanest bad guy here looks majestic and ends up playing ball with his newfound son. Therefore, Dads should not expect another Hollywood movie that maligns them, but rather one that affirms them. Really, what TOY STORY 2 does is affirm parents, and the toys even become metaphors for parents.

In the original TOY STORY, Woody had to rescue the new “big man in the toy box,” Buzz Lightyear (Tim Allen). Now it is good-hearted Woody (Tom Hanks) who gets in trouble by saving a wheezy penguin from the yard sale. In the process, a toy collector, Big Al (Wayne Knight), recognizes that Woody is a rare collectable toy that will finish off a set that is worth a significant amount of money to toy museums around the world. When Andy’s Mom refuses to sell Woody, Al, the big meanie, steals him. (However, by the end of the story, Al gets his comeuppance.) Buzz, Hamm the piggy bank, Mr. Potato Head®, and Slinky Dog see the theft and head out after Woody to rescue him.

This major premise is combined with many great story elements. All of these elements involve love, compassion, forgiveness, and reconciliation. Moreover, these well-crafted themes have strong references to great films. Many of the scenes play off the opening of the original STAR WARS, scenes from STAR TREK, the confrontation between Darth Vader and Luke Skywalker in THE EMPIRE STRIKES BACK, great television Westerns, and many other emotive moments from film and television history. The Western motif plays like a wonderful homage to America’s history and to the good Christian values that built this country and that made the Golden Age of Hollywood and the Golden Age of Television so memorable and worthwhile. It also provides an intelligent cultural insight into some of the important changes that have occurred in popular culture during the last 40 years. Best of all, the movie also has several positive biblical references. Thus, TOY STORY 2 not only presents a fast-paced, hilarious adventure yarn, but also pulls at the heart strings and stimulates the mind as well.