"Sacred Encounters with the Mystery of Life" 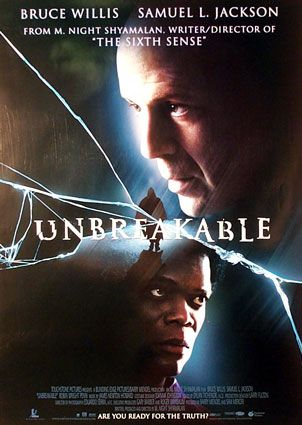 UNBREAKABLE stars Bruce Willis as a security guard named David Dunne, who’s survived a tremendous train wreck. In fact, he’s come away completely without a scratch. Samuel L. Jackson plays Elijah Price, the owner of a comic book gallery who suffers from a terrible disease making his bones very brittle. Elijah tells David a bizarre mystical theory about why he survived the wreck. As Elijah’s theory begins to ring true, it begins to build a strange new confidence in David that starts to heal his troubled marriage and strengthen the bond with his son. It also puts David in danger and threatens to tear his family apart.

UNBREAKABLE is an engrossing mystery thriller with a surprise twist and some moral elements. Willis and Jackson, as usual, create vivid characters. Regrettably, however, there are several strong obscenities and profanities in UNBREAKABLE. There is also a sexual reference in the script, an adulterous flirting scene and a tense dramatic scene involving a child and a gun. Finally, part of the plot involves a villain who has secretly kidnapped some teenage girls and young women. Most of these situations have a moral resolution, but they still require caution

UNBREAKABLE is a new movie written and directed by M. Night Shyamalan (THE SIXTH SENSE and the MOVIEGUIDE® Award winning movies WIDE AWAKE and STUART LITTLE). A Hindu, Shyamalan specializes in mystical movies. WIDE AWAKE, for instance, was about a boy searching for God after the death of his grandfather. Like THE SIXTH SENSE, UNBREAKABLE relies on a surprising twist at the end. Some people will see this twist coming, others won’t. UNBREAKABLE, however, is not so occult-oriented as THE SIXTH SENSE was.

The story of UNBREAKABLE begins with the remarkable birth of Elijah Price. Elijah enters the world with broken arms and legs because he has a terrible bone disease that leaves his bones very brittle. His mother, recognizing that her son is depressed and withdrawn because of his infirmity, encourages him to go outside by leaving comic books on the bench across the street. As an adult, Elijah, now played by Samuel L. Jackson, becomes a collector of rare comic books and owns a gallery of comic book art in Philadelphia.

Bruce Willis plays David Dunne, a security guard at Temple University who has become emotionally detached from his wife and son. He travels to New York City to interview for a job there. On the train back to Philadelphia, he considers having an affair with a woman on the train, but she too is married and finds another seat. Hours later, David wakes up in the hospital, only to find he’s the only survivor of a massive train wreck. Not a bone in his body is broken.

Several days later, at the funeral service for the victims, David finds a mysterious card from Elijah, with the address of Elijah’s gallery. He goes there with his son, Jeremy. Elijah tells them a bizarre mystical theory about why David survived the train wreck. Elijah also believes that David is not living out his true destiny. As David and his wife try to make another go at it, Elijah’s theory begins to fascinate David and his son. It gives David a renewed confidence, but it also puts his life in danger and threatens to tear his family apart.

UNBREAKABLE is an engrossing mystery thriller. Willis and Jackson, as usual, create vivid characters. A heavy air of sadness hovers over Willis’ David. Jackson’s gregarious Elijah pierces David’s soul, opening it up to a whole new world of possibilities based on Elijah’s comic book view of life.

In the end, the movie does not side with the mystical aspects of Elijah’s pagan worldview. Instead, it becomes a provocative dissertation on pursuing the gifts with which we are born and on learning the nature of the battle between good and evil. UNBREAKABLE also shows David growing closer once again with his wife and his son. In that sense, UNBREAKABLE is a classic heroic tale where the hero’s encounter with the sacred depths of the meaning of life and with the power of evil positively affects his personal life and his view about his place in life. Of course, the Bible tells us to establish a personal relationship with God through Jesus Christ, by the power of the Holy Spirit. Jesus is the only road to true personal fulfillment.

Regrettably, there are several strong obscenities and profanities in UNBREAKABLE. There is also a gratuitous sexual reference in the script, an adulterous flirting scene and a tense dramatic scene involving a child and a gun. Finally, part of the plot involves a man who has secretly kidnapped some teenage girls and young women. Most of these situations have a moral resolution, but they still require caution and discernment.