VENOM: LET THERE BE CARNAGE

"Surprisingly Moral and Redemptive, But Marred" 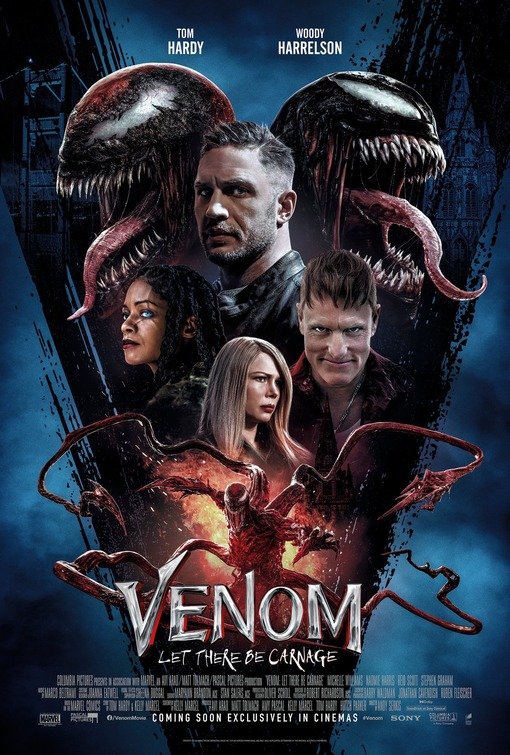 In VENOM: LET THERE BE CARNAGE, Eddie Brock gets a career opportunity to interview infamous criminal Cletus Kasady. In doing so, Eddie and his alien counterpart, Venom, uncover where Cletus hid the bodies of his murder victims. This results in Cletus getting a death sentence. Just before his scheduled death, Eddie comes to interview Cletus for the final time. However, they get in an altercation. This leads to Cletus biting Eddie, ingesting his blood, which creates another alien monster called Carnage. After escaping from prison, Cletus gets Carnage to help his girlfriend escape her high-security mental institution. They decide to exact revenge on the people who’ve harmed them.

(BB, CC, PaPa, Ab, PC, Ho, LLL, VV, S, N, A, D, M):
Dominant Worldview and Other Worldview Content/Elements:
Strong moral worldview overall, with some positive overt and implied Christian elements, includes pro-marriage sentiments, promotion of friendship and doing the right thing, Christian allegories to light overcoming darkness, a Christian church is the sight of the big showdown between the two heroes and the villains, a mention of angels, and an obvious respect is shown for a clergyman who characters assert shouldn’t be harmed, mitigated by some strong pagan/immoral content where characters are frequently motivated by their own lusts for power and achieving their own selfish desires, one false out-of-context biblical reference to an “eye for an eye” that a villain takes out of context to satisfy her motivations for hurting someone, one scene with politically correct dialogue about how aliens should be able to coexist with humans, and another politically correct, quick instance of a man cross-dressing as the Queen of Hearts at a costume party
Foul Language:
About 23 obscenities (including one “f” word), five mostly profanities (including one GD), a few instances of depicted vomiting, an obscene gesture, and one character sits on a toilet, but he’s fully clothed
Violence:
Lots of strong and sometime scary action violence and violence by villains include people are chocked to their deaths, gunfire hits people, car crashes, near-death instances involving getting thrown off buildings and similar things, punching, flat screen TVs and other objects get damaged during fight sequences, character eats chickens off screen, and viewers can hear the chickens screaming, man appears at a lethal injection to answer for his crimes only to become a terrifying monster and kill people shortly afterward, cartoon depictions of electrocution and pushing an elderly woman down the stairs as well as multiple fights
Sex:
Couple makes out passionately multiple times, female tries to seduce Venom to get what she wants
Nudity:
Two instances of upper male nudity, and a cartoon woman’s backside gets shown
Alcohol Use:
Scene at a club with some alcohol, and two characters have wine at dinner
Smoking and/or Drug Use and Abuse:
Brief smoking but no drugs; and,
Miscellaneous Immorality:
Vengeance and threats.

In VENOM: LET THERE BE CARNAGE, Eddie Brock and Venom, the symbiotic alien creature living inside Eddie, must stop another Venom-like creature who’s infected a murderer who teams up with his loony girlfriend to exact revenge on the people who’ve harmed them. VENOM: LET THERE BE CARNAGE has strong character development, great direction, stunning visual effects, with a strong moral worldview containing overt, positive Christian content, but there’s some pagan, immoral, selfish behavior, lots of strong and intense action violence, and slightly excessive foul language.

The movie begins in 1996. Two teenagers are locked away in a mental institution but have a romance with one another. The female, Frances Barrison, has a superpower to take in the noises around her and then emote them in a loud scream. Due to her abilities, a detective and another officer take her away to a different location, only for her to wound the detective with her shrieking.

Cut to the present day. The filmmakers assume viewers have seen VENOM (2018) and pick up where that movie finishes. Eddie Brock (Tom Hardy) and the alien, Venom, are pals of sorts and often teeter between a parasitic and symbiotic friendship. Eddie’s journalism career is still floundering, until Detective Mulligan asks him to interview the infamous Cletus Kasady at the San Quentin Prison. Viewers will note that Cletus was the female teenager’s boyfriend in the opening sequence. During the interview with Eddie, Cletus spews out some poetry that leaves Eddie confused but Venom notices drawings all over his prison cell.

Back at Eddie’s apartment, Venom, who apparently has a photographic memory, draws a copy of something from Cletus’s cell wall. It’s a mountain range at a beach where his victims’ bodies are buried. Eddie and the police force recon the location and now it seems Eddie’s career looks promising. Regrettably, in Eddie’s personal life, his ex-fiancé, Ann, tells him and Venom she’s engaged to her boyfriend, Dr. Dan. Venom is just as sad about the news as Eddie.

Soon after, Eddie gets the opportunity to interview Cletus before he’s euthanized for his crimes. While there, Venom, who’s inside Eddie’s body, snaps at Cletus, and Cletus in return bites Eddie. The only problem is Eddie’s blood isn’t like other humans’ blood, because of Venom, and Cletus notices a difference. Later, as the execution team pumps Cletus full of lethal injections, a red Venom-like creature, soon to be called Carnage, emerges from his human form, killing all who are around him and leading Cletus to freedom.

Once the news of Cletus’s escape travels to Eddie, he pieces together that Cletus might go looking for his former flame, Frances Barrison. In the following scenes, that’s exactly what happens. Cletus breaks Frances out of her high-security institution, and the pair pick up exactly where they left off. As they celebrate their newfound freedom, Cletus, Frances and Carnage want to exact revenge on the people who’ve wounded them: Eddie, Detective Mulligan and Venom.

In the meantime, Eddie and Venom get into a fight which literally ends up separating Venom from Eddie. However, the two might need to come back together soon, especially if Ann’s in trouble.

VENOM: LET THERE BE CARNAGE is worthy of its four stars. The actors do a standup job in their respective roles, and there’s an obvious flaw each character has that the script uses to push the narrative along. LET THERE BE CARNAGE has stunning visual effects and great direction by Andy Serkis, who acted in LORD OF THE RINGS and the recent PLANET OF THE APES movies and directed MOWGLI for Warner Bros. Pictures and Netflix.

VENOM: LET THERE BE CARNAGE has a strong moral worldview with overt and implied positive Christian elements. The positive elements involve pro-marriage sentiments, friendship, and allegorical Christian elements of moving from darkness to light. The movie ends with a climactic scene set inside a church. Also, there’s a mention of angels, and an obvious respect is shown for a clergyman who characters assert shouldn’t be harmed. Like its predecessor movie, VENOM: LET THERE BE CARANGE displays a tension between good and evil, as did SPIDER-MAN 3, which also features the Venom character. That said, media-wise viewers should talk over the themes of good overcoming evil in the light of Bible verses like John 8:12, which says, “When Jesus spoke again to the people, he said, ‘I am the light of the world. Whoever follows me will never walk in darkness but will have the light of life.’”

The movie’s positive content is mitigated by some pagan, immoral elements. For example, some characters are frequently motivated by their own lusts for power and achieving their own selfish desires. The movie also contains two brief politically correct elements and dialogue from one villain who takes the biblically-derived phrase “an eye for an eye” out of context. Finally, LET THERE BE CARNAGE also has lots of strong, intense violence and excessive, gratuitous foul language.

So, all in all, MOVIEGUIDE® advises extreme caution for VENOM: LET THERE BE CARNAGE.

Watch VENOM: LET THERE BE CARNAGE: