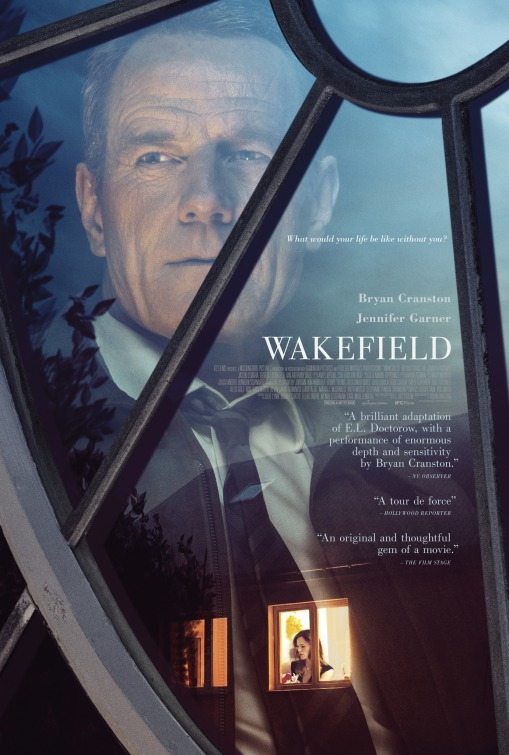 WAKEFIELD stars Bryan Cranston as Howard Wakefield, a bored suburban husband who abruptly decides one day to make his wife Diana, two teenage daughters and co-workers think he disappeared. A successful Manhattan lawyer, Howard hides out in his garage attic and spies on his family, making observations about them while thinking he’ll just carry on his cruel ruse for a short time. However, the days slide into weeks and then months. Also, Howard starts recalling his life in flashback, while he makes snide, sour comments about married life in middle class suburbia.

WAKEFIELD is an intensive character study of a self-absorbed married man coming apart at the seams. Bryan Cranston gives an excellent performance as the disillusioned, selfish husband, as does Jennifer Garner as his suffering wife. WAKEFIELD takes a big swing at marriage and everyday suburban life that is the backbone of much of American existence. Eventually, its sour attitude toward nearly all aspects of traditional nuclear family life and middle-class suburbia becomes excessive and unacceptable. WAKEFIELD also contains some foul language and brief moments of nudity and sexual activity.

(RoRoRo, AbAb, APAPAP, B, LL, V, SS, NN, MM) Very strong Romantic worldview where a mostly unpleasant and selfish/narcissistic married man disappears and secretly watches his wife and family from afar while he makes sour comments about marriage and American life in suburbia (including personal reflections), with some moral elements when two kind mentally challenged people interact with him and man occasionally shows a softer side; six obscenities, four strong profanities and two light profanities, plus it’s implied man urinates in a bottle; comical chase and fight scene between trash raiders over a discarded pair of shoes in the trash; strong and light sexual content includes married couple engage in passionate foreplay against a wall with the husband sliding open her dress showing some side skin of hers underneath, married couple play flirting games with others to pretend to stir jealousy, a few brief flashbacks to husband shirtless on top of wife gazing into her eyes in bed as she's under the sheets, and flashbacks to married couple making out and eventually leading to sex when they were just dating; wife exposes her breasts while standing in her bedroom window, thinking she's unseen by anyone but unwittingly seen by her husband, and husband's voiceover reveals she does that often, wife is also seen walking in topless from the side from across a room and with her robe open revealing the inner edges of her breasts while in a window in another scene, plus brief upper male nudity; no alcohol use; no smoking or drugs; and, husband man pretends to disappear and hides from family while secretly spying on them, leading male character is selfish, manipulative and narcissistic and causes worry and emotional suffering to his wife while snickering about it most of the time, it’s revealed that man engaged in duplicitous behavior while courting his future wife and manipulating her mind and betraying his own best friend who was originally dating her, and man tries to scare away homeless person while foraging in trash.

WAKEFIELD is a drama about a bored suburban husband and Manhattan lawyer who decides one day to disappear from his family and job by hiding in his garage attic, then winds up staying there for months, deeply affecting his own life and his loved ones while he reflects on his cruelly selfish past. WAKEFIELD is well made with strong performances, but it’s ultimately rooted in self-absorption and sour comments about married and suburban American life, with some strong foul language, brief nudity and sexual content.

Bryan Cranston stars as Howard Wakefield, a bored, long-time married Manhattan lawyer living in suburbia who abruptly decides one day to make his wife Diana, two teenage daughters and co-workers think he disappeared. He hides out in his garage attic and spies on his family, making arch observations in voiceover about them while thinking that he’ll just carry on the ruse for a short time.

Howard sneers when Diana calls in the police and when he winds up on the evening news in a missing person’s report while neighbors are over at the house helping to soothe Diana’s worried mind. As he gets more fascinated in watching his life from the outside than in living it, Howard winds up staying in the attic for days, then weeks, then months.

The movie shows his slow but steady slide into this near-homeless state of existence. At first, he sneaks into his own house during the day to raid the fridge, then winds up digging in his own trash for food, and eventually foraging in other dumpsters. He growls at homeless people to scare them away from his searches. In one scene, he winds up in a comical chase and fight with salvagers over a pair of shoes. He also grows his beard out so much that, in another scene, a child offers him a handout while he sits in a park.

Howard also starts recalling his life in flashback, and the manipulative tricks he used to steal Diana away from his own best friend. He also shows the dissolution of his attitude in their marriage, making very anti-marriage comments along the way. Howard’s only redeeming moments come when he interacts with a pair of mentally challenged people who live in a group home next door. They sneak into his attic to visit and help him when he gets particularly lonely or ill.

Based on a short story by E.L. Doctorow, WAKEFIELD is an intensive character study of a self-absorbed man coming apart at the seams. It centers on an excellent performance by Emmy-winning actor, Oscar-nominated actor Bryan Cranston. Jennifer Garner also turns in a solid performance as the wife. Her character arc covers a great deal of emotional terrain, from being naïve to Howard’s manipulations during their courtship, through the loving but occasionally bickering marital years, on through processing the mixed emotions of what might or might not have happened to her husband.

Written and directed by Robin Swicord, WAKEFIELD has some funny lines and scenes mixed in among the dour surface story and narration, and it’s filmed and scored with an impressively stately tone. The movie deftly moves between its flashbacks and the present, revealing both that Howard was always conniving and how Diana fell into his trap.

The subplot with helpful mentally challenged neighbors adds a lot of charm and poignancy at key moments in the movie. It shows a more caring and human side to Howard. Without it, he would have been hopelessly irredeemable to care about or even to watch.

Ultimately, WAKEFIELD takes a big swing at marriage and everyday suburban life that is the backbone of much of American existence. Eventually, its sour attitude toward nearly all aspects of traditional nuclear family life becomes excessive and unacceptable. WAKEFIELD also contains some foul language and brief moments of nudity and sexual activity.