"The Life of an Extraordinary Performer" 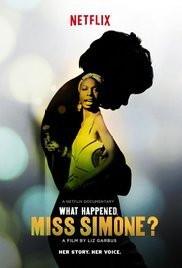 WHAT HAPPENED, MISS SIMONE? is an in-depth documentary about the life of the legendary Nina Simone, a talented concert pianist and pop singer of various styles. This biography walks through all aspects of Nina’s rise to fame, including the good, the bad and the ugly. Nina struggles to find a career as a concert pianist, but her career takes off when she becomes a pop singer in the 1960s. Her husband abuses her, and she becomes a moody, militant civil rights activist, eventually moving to Liberia after quitting her musical career.

WHAT HAPPENED, MISS SIMONE? is beautifully made with pre-recorded interviews from Nina Simone herself and from those that walked this long journey with her. The documentary captures the full life of Nina Simone, beginning to end. There is an overarching question of “what happened to Nina Simone” that is answered quite wholesomely throughout, and portrays her as accurately as possible in each chapter of her life. Due to its heavy content and strong violence, however, MOVIEGUIDE® finds WHAT HAPPENED, MISS SIMONE? is for adults only, with extreme caution required.

(PaPa, PC, B, C, Ab, LL, VVV, S, N, A, DD, MM) Strong pagan worldview about a woman’s pursuit of fame, fortune and acceptance in all the wrong places, with some politically correct civil rights activism, with light moral elements showing the consequences of such actions, plus light discussion of woman’s Christian family background, but with anti-Christian elements when woman “finds God” but still beats her child; 12 profanities (all being GDs) and six obscenities; very strong, extreme and graphic violence including Nina talking about her husband abusing and beating her, tying her up, holding a gun to her head, hitting her head against a concrete wall, punching her in the stomach while she was pregnant, slapping her in the face, as well as Nina beating her daughter, two references to suicide, pictures and video clips of a man being burned alive, large riots of people stealing and burning buildings, a man being hung by the neck, police beat man with a stick, police shown strangling man and dragging him through the streets, police throwing bombs at a group of people, and a picture of a man shot through the head; light sexual content with implied adultery and mention of woman becoming addicted to sex; naturalistic nudity among African people; light and brief alcohol use; light smoking of cigars and cigarettes and moderate use of prescribed medication for sleep, depression and bi-polar disorder; and, strong miscellaneous immorality and behavior such as lying, stealing, gambling, many types of references to racism, bad role models, dysfunctional family portrayals, divorce, running away, and mental disorders.

WHAT HAPPENED, MISS SIMONE? is an in-depth documentary about the life of the legendary Nina Simone, a talented pianist, singer and militant civil rights activist. This biography walks through all aspects of Nina Simone’s rise to fame, including the good, the bad and the ugly.

Nina Simone, born Eunice Waymon, grew up in Tryon, North Carolina with her father and mother, both preachers of a Methodist church, and 13 other brothers and sisters. All were raised in the faith, but something special stood out about Nina. She started playing piano for her parent’s church at the age of 3, after being self-taught. This remarkable talent started Nina on a long path to her lifetime career as a legendary singer, song writer, and pianist.

After years of intense and isolated piano practice, Nina was finally sent off to college in hopes of becoming the first black female pianist to play classical music at Carnegie Hall. However, her school funds ran out, and she was forced to start playing piano in local bars and anywhere that would pay her. She found that people loved a more jazzy feel to her piano playing, and with her new sound came her new name. Thus, Nina Simone was born.

As her career began to grow at an incredible speed, she fell in love and married the man that would become her manager, and the father to her baby daughter. That marriage, however, ended up being one that would later drive Nina into the ground with many years of physical and emotional abuse from her new husband. This darkened lifestyle took a heavy toll on Nina and unleashed some evil “demons” she had been caring inside her whole life.

Manic depression and bi-polar mood swings consumed Nina Simone for most of her life, and led her into very violent thinking and behaviors. When she wasn’t on stage singing about heavy and dark topics, she was found leading crowds of black, African-Americans in revolts against the government and fighting for their civil rights. This eventually led to the ultimate downfall in her career, divorce from her husband, and a new life as a nomad in Africa.

Things eventually turn around for Nina, and in her old age she was able happily able play piano and sing for the many crowds of fans that still love her, but only with the help of strong prescription medications that she took until her death in 2003.

WHAT HAPPENED, MISS SIMONE? is a very strong and powerful representation of the life of Nina Simone. It is very beautifully made with pre-recorded interviews from Nina herself and from those that walked this long journey with her. The movie captures the full life of Nina Simone, beginning to end.

There is this overarching question of “what happened to Nina Simone” that is answered quite wholesomely throughout, and portrays her as accurately as possible in each chapter of her life. Although directed and produced by Liz Garbus, Lise Simone Kelly, Nina Simone’s daughter, had a great first-hand look into the life of her mother with many stories and memories to tell. There is also input from Nina’s ex-husband, Andrew Stroud, along with many other close relatives and friends.

Nina Simone lived a very famous and glamorous life, but was actually a complex and disastrous mess behind closed doors. She dealt with years of abuse from the man that she called her husband, and essentially felt like a free spirited bird that was always locked up in a cage. No wonder this lifestyle led her to such extreme violence, depression and mood swings that would make all those around her fearful of her actions.

Filled to the brim with violence, WHAT HAPPENED, MISS SIMONE? shows not only the abuse that Nina took in her marriage, but also shows the hate and racism that the black community received from the government during the civil rights movement. Nina played a big part in their revolt against certain laws and people, and it was always through violent means, unlike Martin Luther King, Jr., who also fought for civil rights, but through peaceful means.

This documentary really captures the life of someone who was trapped in darkness and was always seeking out the pleasures of this world to satisfy said darkness. It shows the life of someone without the light of Jesus shining through them and leading them into a good, solid and blessed career in an industry filled with evil. If Nina Simone had stuck to the good and moral standards with which she was raised, that probably would have made all the difference in her journey through life.

Due to its heavy content and strong violence, MOVIEGUIDE® finds this documentary is for adults only, but with extreme caution.