"Remembering the Past and Dealing with the Present" 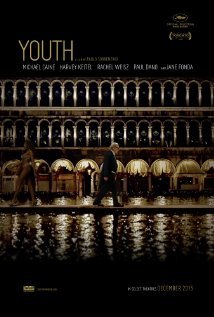 YOUTH stars Michael Caine as Fred Ballinger, a famous composer at the end of his years. Ballinger’s daughter, Lena, lodges him in an expensive German Spa for vacation. Fred’s friend Mick Boyle is at the spa, writing a script with a team of writers. When Lena finds out her husband is having an affair and wants to leave her, she returns to the Spa to reconnect with Fred, who was never there for her. As father and daughter try to reconnect, Fred and his friend, Mick, the meaning of their lives and reflecting upon their pasts.

YOUTH is a well-made movie with great cinematography and good performances all. The movie also has some nice references to movie history, including Italian Director Federico Fellini’s work, as well as some touching, inspiring moments. However, it has a strong Romantic worldview with some humanist comments and some references to Buddhism and Islam. YOUTH also has plenty of strong foul language, lewd references, some immoral personal dynamics, and a spa scene with graphic nudity. MOVIEGUIDE® advises extreme caution, though media-wise viewers will want to stay away.

(RoRo, H, B, FRFR, Ho, LLL, V, SS, NNN, A, D, M) Strong Romantic worldview of doing whatever you like, following your heart and feeling “freedom” in doing these things, with some humanist elements questioning the meaning of life and the supernatural and some touching moments including some family moments as a father tries to reconnect with his daughter when her husband wants to leave her, but one character is a Buddhist monk who meditates and apparently levitates through sheer will power and another character is a Muslim, plus references to a homosexual relationship; 40 obscenities (including some “f” words), three profanities, and mentions of urinating; man kills himself by stepping off ledge which is heard and implied but not directly shown and a woman slaps a man; strong sexual content overall includes two men spy a couple having sexual relations in a forest, comments about an adulterous affair and other adulterous affairs in the past, a prostitute character, some comments about a homosexual relationship, and some miscellaneous vulgar statements and innuendo; full frontal female and male nudity at a spa; light drinking; smoking; and, lying.

YOUTH is about a famous composer who questions the meaning of life near the end of his years. YOUTH is a creative reference to movie history, with a strong Romantic worldview, some humanist comments, plenty of foul language, sexual situations, and a spa scene with explicit nudity.

YOUTH stars Michael Caine as Fred Ballinger, a famous composer at the end of his years. Ballinger’s daughter, Lena, played by Rachel Weisz, puts him up in an expensive German Spa for vacation. His friend Mick Boyle, played by Harvey Keitel, is there writing a script with a team of young writers. When Lena finds out her husband is having an affair and wants to leave her, she returns to the Spa to be with her father. Her father, however, was never really there for Lena. When she was young, he would only focus on work and would have affairs himself. She always felt like her mother was the one who truly raised her, so she wishes her mother is able to be with her at this sad moment in her life.

Distraught, Lena spends her days crying over her broken marriage, while her father tries to learn how to comfort her. Also at the Spa is a young actor, Jimmy, who’s trying to get in the mood before his next role. Once playing a robot in a popular science fiction movie, that is the only renown all Jimmy feels he has, even though he would rather be known for his more challenging roles.

At the spa, Fred is approached twice by one of the Queen of England’s attendants, saying she wants him to play his most famous piece for the Queen’s husband at his birthday celebration. Fred says no to the offer, but the second time he’s asked Lena is in the room. Lena overhears Fred say he won’t conduct that song because his wife isn’t able to sing for it, and she’s the only one he wants. Realizing now that her father always did love her mother, Lena is moved.

Meanwhile, now that they are getting older, both Fred and his friend, Mick, are questioning the meaning of their lives and reflecting upon their pasts. They also comment on the young people at the spa, including the beautiful younger ladies.

Written and directed by the talented Italian filmmaker Paolo Sorrentino, who won the foreign language Oscar for THE GREAT BEAUTY earlier this year, YOUTH is a well-made movie with very artistic cinematography and good performances all around. The movie also has some nice references to movie history, including Italian Director Federico Fellini’s work, as well as some touching moments. Going from reality to a dream-like nature, the movie is sometimes a bit unclear about what’s reality and what’s fantasy.

YOUTH has a strong Romantic worldview. It promotes doing whatever you like, following your heart and feeling “freedom” in doing these things. Most of the movie is saying whatever you want to do, you can do, including one Buddhist character who levitates because he has the will power.

Though this is the case, the lead character doesn’t believe in a supernatural world and is questioning the meaning of existence. So, there’s also some existential humanism in YOUTH as well. The movie doesn’t provide any answers to the questions it poses, however. YOUTH also has plenty of strong foul language, some lewd references and other immoral behavior, and a spa scene with graphic nudity. So, media-wise viewers probably will want to forego this movie, despite its talented, appealing cast.