"Love Is the Answer" 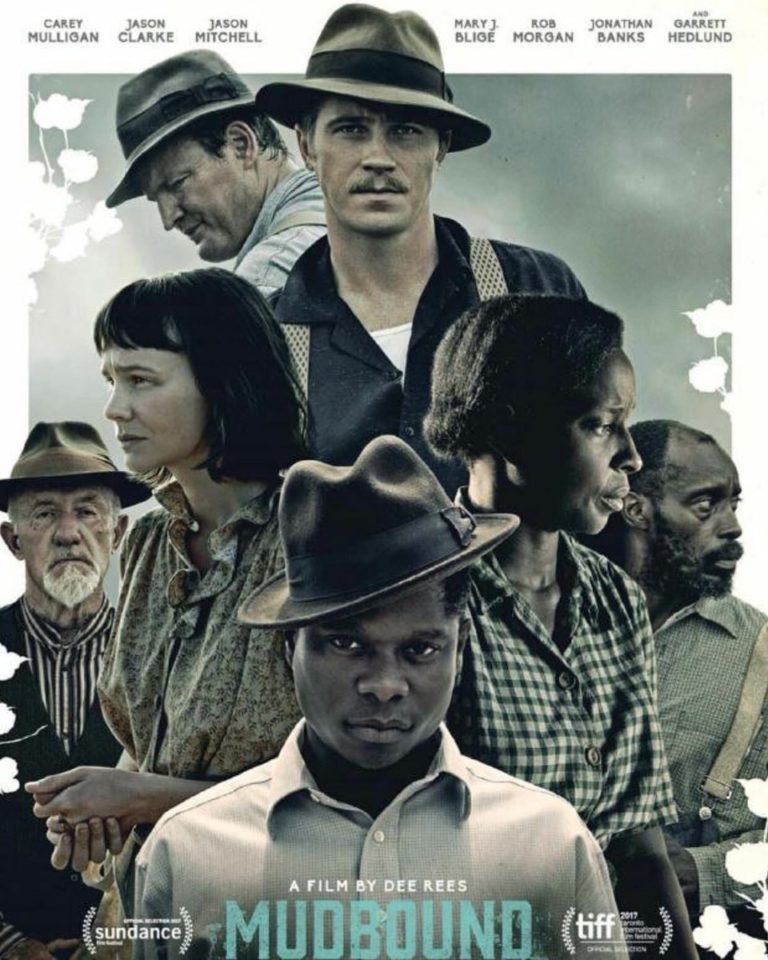 MUDBOUND is a drama set in the early 1940s. While his handsome younger brother fights in World War II, Henry moves his wife, Laura, and their two daughters from Tennessee to a Mississippi farm. Laura struggles to keep faith in her husband's losing venture. Meanwhile, Hap and Flo Jackson, black Christian sharecroppers who have worked the land Henry now owns for generations, struggle to build a dream of their own despite the racism they face. Henry, Laura, Hap, and Flo’s lives are upended when Henry’s brother and the Jackson’s son return home from the war and forge an uneasy but redemptive friendship that irks Henry’s racist father.

MUDBOUND is a realistic drama that contains outstanding acting. However, it’s slow at times. That said, the movie has some powerful plot points. Also, the strong Christian faith of the Jackson family plays an important, uplifting role. Even Henry’s brother has a powerful encounter with God during the war. Sadly, MUDBOUND spoils its positive Christian, moral, patriotic elements with a scene of adultery, foul language, an apparent moment of heresy, and some brief but extreme violence.

Dominant Worldview and Other Worldview Content/Elements:
Strong Christian, moral worldview promoting the redemptive power of love, bonds between people of different races and moments where God, prayer, Jesus Christ, Scripture, church, hymns, and the Cross are validated, with some overt patriotic moments honoring America’s servicemen during World War II, but containing some hedonistic pagan behavior such as a scene of adultery and implications of sex before marriage, plus a moment that seems to preach the false doctrine of Annihilation for wicked, malicious people.
Foul Language:
21 obscenities (mostly “d” and “h” words, a couple “s” words and an SOB), two GD profanities, and four light exclamatory profanities, plus some uses of the “n” word, mostly by racists in the community.
Violence:
Brief extreme violence and some strong violence includes German planes strafe an American bomber during World War II, and it looks like one American co-pilot’s brain is exposed in a couple shots, explosion rips into a tank, but one soldier appears to survive, other gunfire, man shot in leg, man smothers a wicked man to death, KKK thugs say victim has a choice to lose either his eyes or his private parts or his tongue, KKK thugs beat a couple men and bloody wounds are shown so there are moments of extreme brutality, brothers fight, pregnant woman loses baby, and image of a bloody corpse of a philandering side character murdered by his wife.
Sex:
Lightly depicted adulterous kissing and sex (mostly implied), brief depicted ending of marital sex between a couple, implied fornication during war, two men talk briefly about women they met in Europe with an implication they slept with some of these women, marital, premarital and adulterous kissing.
Nudity:
Upper male nudity and woman in a nightgown.
Alcohol Use:
Alcohol use and drunkenness.
Smoking and/or Drug Use and Abuse:
Smoking but no drugs.
Miscellaneous Immorality:
Rampant racism and malice but implicitly rebuked, father of two brothers is a really mean man, man treats his sharecropper families (black and white) badly at times but his father is worse, elderly father calls one son a fool and another son a useless drunk.

MUDBOUND is a realistic drama set in Mississippi about a farmer’s family and the black Christian sharecroppers on his land, whose lives are upended when the farmer’s younger brother and the sharecropping family’s oldest son forge a friendship that irks the farmer’s racist father. MUDBOUND contains some outstanding acting and strong Christian, moral, patriotic elements, but it’s sometimes slow going and contains lots of foul language, a scene of adultery and some brief but extreme violence that warrant extreme caution and make the movie a little less inspiring.

Based on a novel by Hillary Jordan, MUDBOUND follows the McAllan family, newly transplanted from the quiet civility of Memphis in 1941 and unprepared for the harsh demands of farming. Despite the grandiose dreams of Henry (Jason Clarke), his wife Laura (Carey Mulligan) struggles to keep the faith in her husband’s losing venture. Meanwhile, Hap and Florence Jackson (Rob Morgan, Mary J. Blige), black Christian sharecroppers who have worked the land for generations, struggle bravely to build a small dream of their own despite the racism and social barriers they face.

World War II upends both families’ plans when their returning loved ones, Jamie McAllan (Garrett Hedlund) and Ronsel Jackson (Jason Mitchell), forge a fast but uneasy friendship. Ronsel felt like a liberator in Europe but returned to Mississippi like a slave. Their friendship upsets Henry and Jamie’s racist father, Pappy, and results in a tragedy that will change their lives.

MUDBOUND is shot in a realistic fashion and contains some outstanding acting. However, most viewers will find it slow going at times. Part of the problem with that is that most of the movie is told in a flashback, with some narration by the different characters that tries to provide emotional context to what viewers are seeing. The narration helps end the movie with a hopeful nod to the redemptive power of love, so it’s not a total waste. Also, the movie doesn’t really get to its premise until the middle, when the conflict between Ronsel, Jamie and the local racists in town starts coming to the foreground. Before that, the movie spends about half its running time showing the events that happen between Henry’s family and the Jacksons, who are sharecroppers working on Henry’s land.

That said, the movie has some powerful plot points throughout its running time that will help hold the average viewer’s interest. Also, the strong Christian faith of the Jackson family plays an important role in the movie. There are positive references to prayer and Jesus in MUDBOUND. In addition, Ronsel’s father, Hap, delivers a rousing sermon in a church scene on the comfort that Jesus Christ and eternal life brings during times of trouble and suffering. Finally, there’s a great scene where Jamie explains to Ronsel why he decided to befriend the young man. Ronsel served as a tank sergeant while Jamie was a bomber pilot. During a difficult time where his buddies were dying around him, Jamie prayed to God to save his life, and, in return, Jamie would try to do some good in the world before he dies. God answered Jamie’s prayer by sending an escort of P51 American planes. One of the pilots was a black man who saluted Jamie as he sped by in his plane. Jamie tells Ronsel he felt the pilots that saved him were like angels sent from God.

Sadly, the filmmakers spoil these positive Christian, moral, patriotic elements by including some flawed moral and spiritual elements.

Eventually, for example, Jamie and Henry’s wife commit an adulterous act when, toward the end of the movie, Henry tells Jamie he must go away after they have a serious fight about Jamie’s drunkenness. Both men say harsh words to one another they can’t take back. Also, scenes set on VE Day in Europe show that Ronsell was sleeping with a German girl when the war ended. In addition, there’s a scene toward the end that seems to preach the false doctrine of Annihilation. In the scene, Ronsel’s preacher father indicates that really evil, malicious people like Henry’s father will not suffer eternally in Hell but just return to dust and be forgotten. MUDBOUND also contains plenty of foul language, including several GD profanities uttered by flawed or evil people. There are also some scenes of strong violence that include two or three moments of gore or extreme and implied brutality.

Ultimately, therefore, despite all the good things in MUDBOUND, MOVIEGUIDE® advises extreme caution. In the Golden Age of Hollywood, the movie studios would fix the problems in MUDBOUND to make an even more inspiring movie that all or most members of the family could enjoy, even if it meant changing some parts of the novel on which a movie might be based. Such movies as that, more often than not, stood the test of time.