"Who Is the Real Victim?" 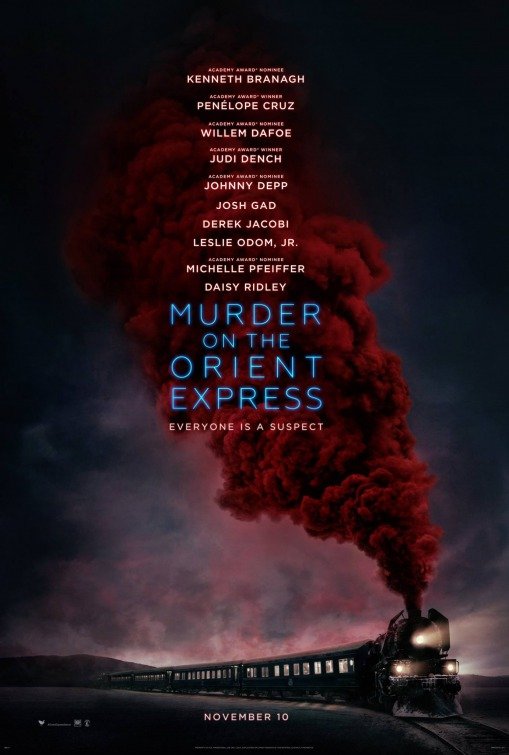 MURDER ON THE ORIENT EXPRESS is a remake of Agatha Christie’s classic 1934 mystery novel. Consulting detective Hercule Poirot, mourning his wife’s death, decides to take a vacation. A friend offers him the chance to head to travel from Istanbul to Europe on the luxury Orient Express train. Poirot notices the odd behavior of a dozen fellow passengers. They include an actress suffering the pains of fading glory, a doctor with an attitude and a nervous uptight missionary. Poirot’s forced to deal with the passengers as a detective when another passenger with a shady past is found stabbed to death.

It would seem wise to leave a classic movie and novel untouched. However, Director Kenneth Branagh (who also plays Poirot) has delivered an astounding, captivating movie. He combines vivid performances by an all-star cast with stunning imagery, a magnificent score and a fine screenplay that attains an emotional, moral resonance far too often lacking in major studio fare. MURDER ON THE ORIENT EXPRESS is a thoroughly entertaining movie, but it's marred by some foul language and a weak, antinomian ending where relativism trumps justice and truth.

(BB, CC, Ro, FR, LL, VV, S, A, DD, M) Strong moral worldview involving a murder mystery and pondering what is true justice, with some overt Christian, biblical elements and allusions (including talk of sin, there’s a priest character in the movie’s opening sequence, and one character has become a Christian missionary, plus forgiveness plays a key part in the climax), allusions to being judged by a jury of one’s peers, plus some Romantic elements and some false theology at the end, including an antinomian ending that undermines the morality taught earlier in the movie and there's a Muslim imam character in the opening sequence; eight obscenities ("d" and "h" words), two strong GD profanities and two light exclamatory profanities, plus some coy but not graphic innuendoes and sneers by one playboy character, showing a cavalier playboy attitude toward relationships; some brief strong and light violence includes a couple of gunshots that only graze their victims rather than really hurting them, a couple fistfights that also involve attempts between the antagonists to hit each other with blunt objects, flashbacks to the kidnapping murder of a child, a flashback reveals how the murder occurred implying a series of stab wounds that are not shown as they happen, a corpse is shown very bloody with a chest cavity opened from afar and above, a woman pulls a gun on herself, but it has no bullet when she pulls the trigger, references to the murder of a 3-year-old girl that greatly affected her family and those around her, and the murder of a villainous victim is shown as still having a devastating effect on the people involved; no depicted sex, but man is with what is revealed to be a prostitute while making wisecracks implying they’re fornicating; no nudity; social drinking of alcohol shown throughout this movie set in the 1930s; some occasional cigarette smoking and a character seems addicted to barbiturates because of past trauma; and, lots of deception and duplicity among many characters to hide the truth about a murder from a private detective and the authorities.

MURDER ON THE ORIENT EXPRESS is a remake of the Oscar-winning 1974 hit movie starring Albert Finney, Ingrid Bergman and Sean Connery and brings the classic mystery novel by Agatha Christie to even more vibrant life. It would seem wise to leave that classic untouched, but Director Kenneth Branagh has stepped up to deliver a movie that pairs vivid performances by an all-star cast with stunning imagery and a magnificent score with a screenplay by Michael Green (“Logan”) that attains an emotional resonance far too often lacking in major studio fare.

Best of all, this MURDER has been shot with the option of being displayed in the full, now-rare glory of the 70mm format. The result is a dazzling work of art that is alternately fun to watch and hard to shake, the very definition of must-see filmmaking and worth every penny viewers pay at today’s excessive prices.

Branagh holds the screen magnetically with his lead performance as Inspector Hercule Poirot, a man whose ace deductive skills have made him famous across Europe. After an amusing opening sequence set in Jerusalem where he reveals that it’s a corrupt police officer who committed a heinous crime (rather than the priest, rabbi and imam who are about to be executed publicly), Poirot declares his need for a vacation.

While the inspector sports an impressive handlebar mustache and a showman’s panache, he’s secretly saddened by the loss of his wife. A friend takes pity on his loneliness and offers him the chance to hop a luxury passenger train called the Orient Express for some rest and relaxation from Istanbul to Paris.

Poirot quickly notices a string of odd behavior and quirks from a dozen of his fellow passengers, including an actress who’s suffering the pains of fading glory (Michelle Pfeiffer), a doctor with an attitude (Leslie Odom Jr.) and an uptight missionary (Penelope Cruz). He’s forced to deal with them head-on when the train is trapped by an avalanche while traveling through the mountains, and especially when Ratchett, a boorish passenger with a shady background, played by Johnny Depp, is found stabbed to death in his cabin.

As Poirot tries to unravel the mystery of who killed Ratchett, he discovers no one is exactly as they seem, including the victim himself. Trying to deduce the twisting motivations across so many fellow passengers leads to a delicious array of twists that pay off with a walloping surprise.

The flaw in the otherwise well made movie is that it does not fulfill its premise. The premise is to find the truth and bring justice, but at the end relativism trumps truth and justice. Therefore, the end of the movie is unsatisfying.

Certainly, some viewers may have seen the original movie or read Agatha Christie’s popular, brilliant 1934 mystery novel, but Branagh and Green manage to give this ORIENT EXPRESS an impressively profound moral sense. As the discovery of how the murder occurred is revealed, the lush score by Patrick Doyle (“Hamlet,” “Sense and Sensibility”) attains a tragic undertone that helps attain the rare feat of portraying even a righteously vengeful murder in a way that makes viewers feel every anguished moment in taking of a human life, no matter how evil the victim was or how just his premature death is.