"There’s Hope for Everyone in Christ" 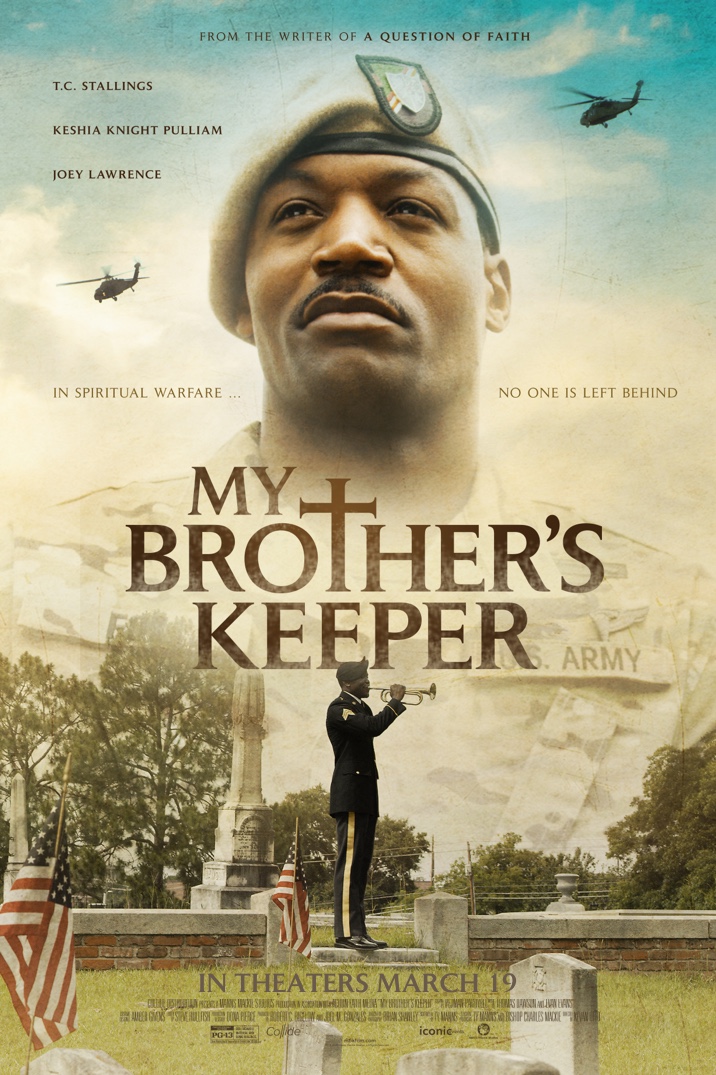 MY BROTHER’S KEEPER (2021) tells the story of Travis Fox and his struggle with PTSD as he tries to find his way back to purpose, meaning and faith. Travis Fox and his friend, Ron “Preach” Pearcy, are in their sixth combat deployment. Preach asks if Travis would pray for him and his platoon. Travis responds by saying he doesn’t believe in the Bible. Sadly, Preach is killed in an ambush. Travis returns to his hometown to find his best friend and the town are controlled by rival gangs. However, his real enemy is PTSD. Travis believes life is hopeless until he befriends a church counselor.

MY BROTHER’S KEEPER has a strong moral, Christian worldview and tells a powerful story of conversion. It stresses Biblical virtues like forgiveness, sacrifice, and hope through faith in God. The movie is also a strong pro-military and Pro-American story, showing the plight of veterans returning to America. The movie depicts the painful reality of PTSD, which could be disturbing for younger audiences. However, MY BROTHER’S KEEPER champions God’s power to heal anyone despite their physical or spiritual state.

(CCC, BBB, PP, VV, A, M):
Dominant Worldview and Other Worldview Content/Elements:
Very strong Christian worldview with very strong morality includes scenes of faith, Scripture and prayer throughout, a brief allusion to the church’s belief that baptism is necessary to salvation, the story mainly focusses on the God’s power to heal broken humans, spiritually and physically, and movie contains many biblical themes like forgiveness, sacrifice, redemption, hope, and fellowship, plus strong pro-military and Pro-American scenes,
Foul Language:
One “h” obscenity and no profanities
Violence:
There are war-related deaths that are very intense, although depicted they are brief and not gory, an innocent man is shot by gang members, there are many scenes depicting PTSD that are quite intense and often show death, and hallucinations of Travis’ dead friend, there is another mention of a car accident which killed two people
Sex:
No sex
Nudity:
No nudity
Alcohol Use:
No alcohol is consumed, but one scene at a party shows people holding alcohol
Smoking and/or Drug Use and Abuse:
No smoking or drugs; and,
Miscellaneous Immorality:
There are some responses of violence and anger by characters, but these are redeemed later through humility and forgiveness.

MY BROTHER’S KEEPER (2021) is a new faith-based movie about a veteran who struggles with PTSD, the safety of his closest friends and his own spiritual battle.

The movie opens with SFC Travis Fox (TC Stallings) talking to his best friend SFC Ron “Preach” Pearcy (Joey Lawrence). They have served 15 years for the United States Rangers. However, Preach is nervous about going out with his platoon, more nervous than Travis has ever seen him. Preach pulls out a Bible and asks if Travis will pray for him and his platoon. Travis says that he doesn’t believe the lies in that book. Preach implores that Travis does not neglect his soul, but Travis believes God gave up on humans a long time ago.

Later that night, Travis receives the horrible news that Preach and his whole Ranger platoon were killed in an IED blast. Travis is devasted by the news and returns home.

It is revealed that his parents were killed in a car accident two years prior, and Travis is determined to find out what actually happened. He remembers a necklace he gave his mother and how she said she would never take it off until Travis got home. However, he can’t cannot find the necklace, which raises his suspicions.

Travis connects with his best friend, Donnie, but neglects to hang out with him. His PTSD is severe, and he struggles to understand his purpose and thoughts of Preach fill his mind. A local church has a veterans ministry run by Dr. Tiffany Roberts (Keisha Knight-Pulliam). The church’s pastor and Tiffany both try to convince Travis to help out at the church. He gets angry and maintains that God has turned His back on him.

Travis’ struggle with PTSD grows more intense, to the point where he’s contemplating suicide. Travis struggles to find purpose and neglects to see those around him, like Tiffany, who are trying to help him. Travis must come to face to face with his inner turmoil and his need for God and the truth of God’s Word Written.

MY BROTHER’S KEEPER (2021) has a strong Christian, moral and tells a powerful story of conversion. It stresses Biblical, Christian virtues like forgiveness, sacrifice and hope through faith in God. The movie is also a strong pro-military and Pro-American story, which shows the plight of veterans returning to America. The movie depicts the painful reality of PTSD and its effects, suicidal thoughts and moments of hopelessness, on veterans in an intense fashion, which could be disturbing for younger audiences. However, it champions God’s power to heal anyone despite their physical or spiritual state. Due to brief gang violence and war violence, MOVIEGUIDE® advises caution for older children and some teenagers.