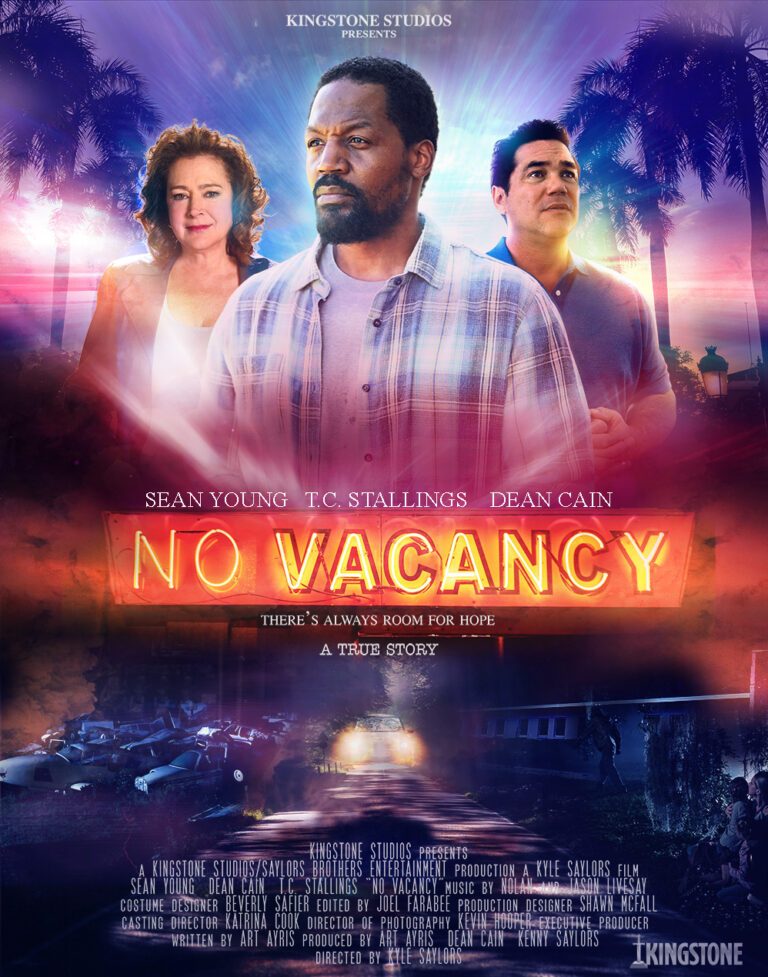 NO VACANCY tells the true story of a reporter named Brandi Michaels, who’s demoted to the rural town of Leesburg, Florida. Brandi must pursue a story about Pastor Cliff Lea and First Baptist Church of Leesburg’s efforts to support the homeless through the purchase of a motel. However, the church needs $600,000 before the deadline, or they won’t be able to buy the building. As Brandi covers the incredible story of faith and provision, she begins not only to rethink the purpose of her career, but her spiritual faith as well.

NO VACANCY portrays this true story in a lively, compelling way that keeps viewers engaged from start to finish. The performances by Sean Young, TC Stallings and Dean Cain bring their characters to life. NO VACANCY has a strong Christian, biblical, moral worldview. It stresses prayer, trusting God over man, redemption, the power of the Gospel, helping other people, and unity. It supports the church and the gospel call to care for the needy. MOVIEGUIDE® advises caution for older children because of references to drug addiction and some intense scenes featuring violence.

(CCC, BBB, CCC, VV, AA, M):
Dominant Worldview and Other Worldview Content/Elements:
Strong Christian, biblical, moral worldview stresses emphasizes key biblical themes like redemption, sacrifice, trust, and perseverance, contains powerful true stories showing how God’s people faithfully serve God and help other people, and highlights the redemptive power of Jesus Christ for healing to overcome addiction and negative and destructive circumstances
Foul Language:
No obscenities or profanities, but there’s some mild rude language and name-calling
Violence:
Strong violence with some blood includes the movie depicts the consequences of drug addiction in a scene where a man walks into the middle of a street and wants to get hit by a car because he sees no hope, the traffic misses the man, a man shoots someone who owes him money, another intense scene depicts race-related violence where three white men beat up a black man and trauma from this incident is discussed
Sex:
No sex
Nudity:
No nudity Alcohol Use/Abuse: Some brief scenes with alcohol, a man is hungover and drunk in a scene
Smoking and/or Drug Use and Abuse:
No smoking, but a man is addicted to cocaine and his addiction leads to other bad consequences, but the movie rebukes drug addiction and encourages Christians and other people to help drug addicts recover from their addiction; and,
Miscellaneous Immorality:
While there are some adult themes and intense scenes, drug addiction and violence are eventually redeemed through the power of God’s Word Written.

NO VACANCY tells the true story of a reporter who’s demoted to the rural town of Leesburg, Florida, but finds purpose and faith when she pursues a story about a local Baptist church’s efforts to support the homeless physically and spiritually. NO VACANCY portrays this true story in a lively, compelling way and has a strong Christian, moral worldview stressing key biblical themes like redemption, sacrifice, trust, and perseverance, but MOVIEGUIDE® advises caution for older children and young teenagers due to some intense violence and references to overcoming drug addiction.

The movie opens with a man walking into the middle of a street, hoping that a car will hit him. It’s later revealed he’s addicted to drugs and believes there’s no hope for his life. The man, Cecil Johnson, eventually makes his way to a liquor store, and a friendly man offers to buy him breakfast.

Johnson is thankful for the meal, and the man tells him that he knows of a rehab center that can help him with his addiction to cocaine. Johnson agrees and starts rehab.

At the same time, a reporter named Brandi Michaels is demoted to Leesburg, Florida, after her news company goes digital and has to make some cuts. Brandi is frustrated that she has yet to make it on the newspaper’s front page, despite all her hard work. Brandi’s demotion couldn’t come at a worse time, because she has to take care of her alcohol-addicted brother and their mother, who has dementia.

Reluctantly, Brandi accepts a story that follows the efforts of Pastor Cliff Lea and his Church, First Baptist Church of Leesburg, to buy a motel to offer shelter for the homeless. Brandi is personally opposed to any kind of religion, but she honestly starts to research the story and the positive impact it would have on the community.

As Brandi continues to research the Church’s desire to buy the motel, she interviews a now clean Cecil Johnson. Johnson tells Brandi of his miraculous transformation.

Pastor Lea needs $600,000 to buy the motel. On top of the financial challenge, the city officials are against the church buying the building because they believe it will only put the middle-class families surrounding the motel at higher risk.

Despite the odds stacked against him and the church, Pastor Lea trusts God. As Brandi uncovers the truth behind what the church’s purchase of the building would do for the community, she knows that her story could help or sink Lea’s plan.

After a personal encounter with God, Brandi knows what she must do. However, with the city against them, with Lea and the Church put their faith in God or lose hope?

NO VACANCY portrays this true story in a compelling way that keeps viewers engaged from start to finish. Performances by Dean Cain, TC Stallings and Sean Young bring their individual storylines to life and help create a cohesive overarching story.

NO VACANCY has a strong Christian, moral worldview. It stresses prayer, trusting God over man, redemption, the power of the Gospel, and unity. It also supports God’s call in the Bible to care for the poor and needy. MOVIEGUIDE® advises caution for older children and young teenagers due to some intense violence and references to overcoming drug addiction.