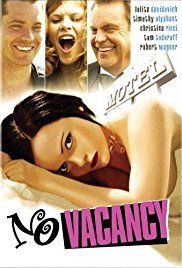 A host of quirky and demented, but lovable, losers populate the rooms at The Pink Motel in the San Fernando Valley in the comedy NO VACANCY. Some sleazy sexual elements and a lot of foul language undermine the charming moments in this movie. Eventually, the sleazy elements of his movie betray the theological bankruptcy of the romantic worldview.

A host of quirky and demented, but lovable, losers populate the rooms at The Pink Motel in the San Fernando Valley in the comedy NO VACANCY, one of 26 movies looking for a distributor at the Los Angeles Independent Film Festival in April. Shot in a breezy, colorful manner by Russian immigrant Marius Balchunas, a protégé of writer/director Ron Shelton of TIN CUP and WHITE MEN CAN’T JUMP, this movie has some really charming, endearing and funny moments in spite of its sleazy material.

NO VACANCY opens with 21-year-old Lillian, played by Christina Ricci, waking up to find a strange young man in her bed. She calls the motel owner, Reynaldo, played by Joaquim De Almeida, but Reynaldo is busy arguing with and complaining to his beautiful daughter, Ramona, about the white boyfriend with whom she has fallen in love. Reynaldo keeps hanging up on Lillian. Exasperated, Lillian tries to get the man out of the bed on her own, but the young man, whose name is Luke (Timothy Oliphant), refuses to leave because he is still sleepy.

Meanwhile, next door, two sleazy, unshaven ne’er-do-wells, Pete and Alex, wake up with two “escort” girls they hired for the evening, a hard-nosed black woman named Penelope and a ditzy white girl. When Alex and Pete can’t come up with the rest of the money they owe, Penelope tells them she will send her pimp, Mr. Tangerine, after them. The girls leave, and Alex and Pete go in search of handouts so they can buy more beer. They run into Constance, a health nut living next door who offers them beet juice and lots of crazy advice about their health and the Y2K bug.

Finally, Ramona’s white boyfriend, Michael, shows up to propose to her, and Lillian’s alleged “fiance,” Steve, shows up with a Russian woman named Peaches in Lillian’s car. Steve kicks Luke out of the room, but, in talking to Luke, Lillian has begun to fall in love with him, and the audience discovers that he’s not such a stranger after all. Ramona, Michael and Reynaldo eventually reconcile, even though it’s revealed that Ramona has missed her period but turns out not to be pregnant. Furthermore, Constance meets the Russian violinist living at the motel. Finally, Mr. Tangerine shows up to collect his money.

The most moral, and one of the most charming, aspects of NO VACANCY is the obvious caring that the gruff Reynaldo shows for his daughter, Ramona. Although he tests the mettle of Michael, her white suitor, Reynaldo also displays a graciousness for the man who turns out to be his future son-in-law. De Almeida, who plays Reynaldo, has turned in some interesting performances in recent years, most notably as the villain in CLEAR AND PRESENT DANGER, and it’s a pleasure watching this actor from Portugal turn in another solid performance.

Also, although he’s a fornicator, Luke displays some human compassion, even when he has a hilarious argument with a paranoid Alex (Steven Schub, in one of the more maniacal performances seen in recent years). Like most of the rest of the characters in this movie, Luke rises above his faults. He even displays humility and a good work ethic – all he wants is to run his own appliance repair business.

Writer/director Marius Balchunas displays a romantic worldview in NO VACANCY. Nearly all his characters are basically good, even when they have sleazy habits or behave immorally. Eventually, the sleazy elements of his movie betray the theological bankruptcy of romanticism as a worldview. Lust and sexual deviancy become valuable goals in such a worldview. By mitigating the effects of such sin, romanticism belittles the need for salvation and redemption, indirectly if not directly mocking the death that Jesus Christ suffered on the cross for our sin.