"Redeeming the Circus of Life" 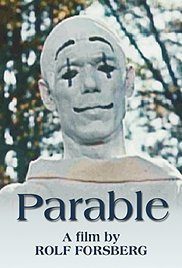 PARABLE is a short holy fool allegory from 1964 about a clown redeeming some people in a circus. The movie opens with circus wagons traveling a country road. Walking behind them is a clown. The clown helps a man watering the elephants and takes the place of a black man in a dunking tank and a woman in a magic trick involving swords. The people he helps follow him, but the magician, puppet master and authority figures are furious. In the circus, the puppet master has a real-life Punch and Judy suspended from trapeze wires. The clown serves the audience, and chaos ensues.

PARABLE is shot mostly with music and no dialogue, except during the crucifixion allegory. It’s a very artistic, captivating movie short. It has some loose ends: for instance, there’s a hint that Jesus Christ is just resurrected in the hearts and actions of those he saved. That said, PARABLE is a wonderful movie sure to inspire many discussions about Jesus. It’s also one of those rare allegorical movies where Christ is portrayed as a Holy Fool or clown.

(CCC, BBB, V, M) Very strong Christian, biblical worldview where a mysterious circus clown comes to redeem a circus with Christian allusions and symbolism; no foul language; very minor violence when Christ-figure clown is hung from a trapeze and three villains stab at him, throw baseballs at him and otherwise attack him; no sex; no nudity; no alcohol use; no smoking or drugs; and, the Resurrection seems to be suggested as the puppet-master/devil becomes the new clown Christ figure.

PARABLE is a short holy fool story about a mysterious clown who’s redeeming some of the people in a circus. It is a very artistic movie that was featured at the 1964 World’s Fair in New York. Many of the director’s movies, such as THE ANTKEEPER, are direct allegories of the story of Jesus. PARABLE has some loose ends.

The movie opens with circus wagons passing along a country road. In one of the wagons stopped by the side of the road, a man wakes up to start putting on his makeup. Walking behind the wagons is a clown in white makeup and clothes.

In the sideshow, the clown takes the place of the woman in the box being stabbed with swords. She too follows him, but the magician with the swords and the carnival sideshow barker furiously go after the clown.

In the circus, a puppet master has a real-life Punch and Judy show suspended from trapeze wires with an executioner suspended next to them on the same wires. The puppet frames are clearly three crosses. The clown comes into the circus and starts cleaning and polishing the shoes of the children in the audience, ruining the puppet master’s show.

Chaos ensues and when Punch and Judy and the executioner fall to the ground, the clown is hoisted up onto the cross-like trapeze rigging. The disgruntled baseball thrower, ticket seller, magician, and puppet master all attack the clown as he rises into the air.

PARABLE is shot mostly with music and no dialogue, except during the crucifixion allegory. There is a hint that Jesus Christ is resurrected in the hearts and actions of those he saved. This would conform to the German school of higher criticism. There’s no way of telling whether this was the filmmaker’s intention, but from the rest of his movies, he seems to be very orthodox in his faith.

PARABLE became a very popular, artistic teaching tool for the church and has just been re-released by Vision Video. It is a wonderful movie sure to inspire many discussions about Jesus. It’s also one of those allegorical movies where Christ is portrayed as a Holy Fool or clown, such as GODSPELL, and is highly recommended by MOVIEGUIDE®. You can find out more here.