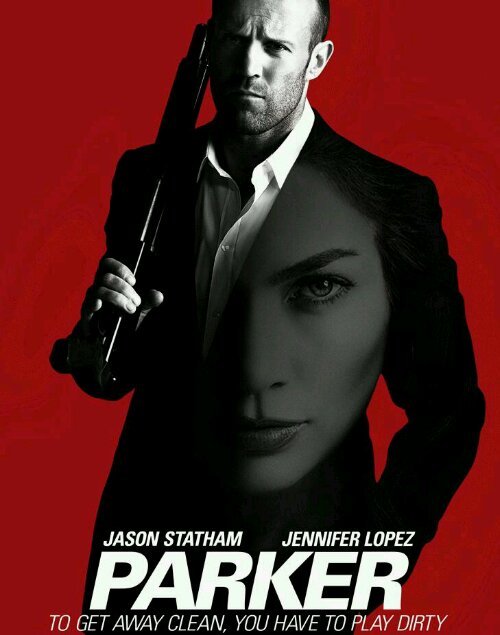 PARKER is a crime thriller based on an acclaimed series of books about a hard-nosed professional thief with his own code of ethics. In this story, the title character is betrayed by his new gang and left for dead. Parker tracks them down to a small house in ritzy Palm Beach, Florida. They plan to steal $75 million in jewels at a fancy auction. The gang is connected, through one of its members, to a Chicago mobster. While tracking the gang, Parker ruffled the mobster’s feathers. So, the mobster sent a hitman after him, and the hitman has tracked Parker to Florida. Can Parker escape the killer’s clutches and get his revenge on the gang, while getting back the money they stole from him?

PARKER is an entertaining, realistic crime thriller, despite some possible plot holes. Jason Statham makes a good Parker, even with his English accent. Of course, Parker always gets away with his crimes. There’s also a lot of strong foul language, a revenge theme and some very strong bloody violence. The main messages in PARKER are immoral and totally unacceptable.

(PaPaPa, C, B, Ab, LLL, VVV, S, NN, A, M) Very strong pagan worldview about a professional thief and his Johnny-come-lately partner who get away with stealing from another gang of thieves, plus a Christian couple with thick Appalachian accents rescues the seriously injured protagonist and take him to the hospital and they praise Jesus when he anonymously sends them some of the money he got from a heist caper (they don’t know how he got the money, so the scene where they talk about getting the money and paying off their mortgage is played ironically, in a double-edged way that can be taken both slightly positively and slightly negatively at the same time); about 91 obscenities (mostly “f” words), seven strong profanities, eight light profanities; some very strong violence with blood and some strong violence includes knife goes through man’s hand during fight, people shot point black, man shot in head, man’s ear clipped by bullet fired from gun, man stabbed in chest and bleeds, man plummets to his death but impact is only heard, brutal fight in hotel room, man hits hitman in head with toilet lid and man hits head on tub as he falls, knife fight, small arson created with fireworks as a diversion, man falls out of car and rolls around on street from fall, man left for dead after being shot, another act of arson results in a tent fire and small propane explosion at a fair pavilion, and a TV report TV that a man consequently died at that pavilion, one thief’s selfish stupidity get an innocent bystander killed in a fire and small explosion, and knife-wielding hitman tries to kill woman but she escapes before he can attack her; implied fornication in one scene with nudity, man ogles girls, and protagonist has a long-term relationship with a woman with whom he shares a small isolated lake house; shots of upper female nudity in three short scenes and some upper male nudity; some alcohol use, including scene in a rock music nightclub with strippers; no smoking noticeable; and, strong miscellaneous immorality includes stealing, revenge, thief rationalizes his stealing by listing “ethical” rules he has such as not killing anyone and always doing what he says he’ll do, thief poses as priest to gain entrance into guarded cashbox area at state fair and soothes one of the anxious guards having a panic attack and anxious guard says, “Thank you, Father,” even though the “Father” is robbing the cashbox of $1 million, betrayal, thieves pose as firemen, and real estate agent helps thief get revenge out of personal gain and cheats another agent out of her “client” who turns out to be the thief posing as a client.

PARKER is a crime thriller developed from a series of books by acclaimed mystery writer Donald E. Westlake writing as Richard Stark. The books are about a hard-nosed professional thief with his own stringent code. Parker doesn’t rob from anyone who can’t afford it. He always does what he says he’s going to do, even if it puts his life at risk. Also, he won’t kill any innocent people. In fact, he will go out of his way to protect them if he can. The Parker series is more serious than Westlake’s comical crime novels. Hence, the pseudonym. Some of the previous movies based on the Parker novels include POINT BLANK with Lee Marvin, THE OUTFIT with Robert Duvall, and PLAYBACK with Mel Gibson.

The new movie is based on Westlake’s 17th Parker novel, FLASHFIRE. It’s somewhat of a rehash of the first Parker novel, THE HUNTER, where Parker is betrayed and left for dead by his partner and wife, then embarks on a relentless quest to get back his money and get revenge.

In this instance, English tough guy Jason Statham plays Parker. The father of Parker’s longtime girlfriend, Claire, and his mentor, recommends a group of thieves headed by a guy named Melander, played by Michael Chiklis of television’s VEGAS, THE SHIELD, and THE COMMISH. Parker gets to be in charge of the group, which is intent on robbing the cashbox at the Ohio State Fair. Hardwicke, the youngest member of the team, fouls things up when he goes against Parker’s plan, creating a diversion near a crowded pavilion, and thus endangering a group of fair patrons. One patron dies and several others are injured. Even so, the heist goes smoothly, and the gang gets away with $1 million.

As they travel down the road in an SUV, Melander proposes another, bigger heist to Parker. In this heist, everyone will take the $200,000 they got from the Fair job to use as seed money to steal $75 million in jewels in another city to be named later. Parker says he’s not interested in risking what he’s already got for such a lark. The new heist sounds fishy to him from the beginning, especially when Melander reveals that his guys are linked to the Mob in Chicago. He reveals that Hardwicke is the nephew of one big mobster, who says he’ll give them 20 cents on the dollar for the jewels instead of the usual 10.

The four other members of the team have prepared for Parker’s rejection. They try to ambush him in the SUV, but Parker gets the drop on them. There’s a struggle inside the SUV. Parker goes out the door while the van almost crashes and careens to a stop yards away.

Melander orders Hardwicke to go back and finish Parker off. Hardwicke thinks Parker’s already dead or dying, but he takes one shot at him anyway and rolls his body down to the edge of the small stream beside the road.

Of course, Parker’s not dead. The scars he already has on his body show how tough he really is. After the gang drives off, a Christian couple with thick Appalachian accents soon drive by in their truck and take Parker to the hospital. Parker wakes up and escapes from the hospital just as the police are about to come and question him.

With help from Claire’s father, a retired thief, Parker tracks Melander and the other men to Palm Beach, a ritzy section in Southern Florida. He does so by threatening Hardwicke’s brother, another nephew of the mobster.

However, Parker doesn’t know what the job is or where they’re staying. It’s not in a hotel, so he poses as a rich Texas oilman and contacts a local real estate company.

At the company, one of the novice real estate agents, Leslie, is a down-on-her-luck divorcee, played by Jennifer Lopez. Leslie desperately needs her first big commission, so she secretly cheats another agent to get Parker’s alias and try to sell him a property. She gets suspicious when Parker seems only interested in the smaller one to two million dollar homes, not the 10 million and up homes she was counting upon to help her get out of debt.

While Leslie tries to blackmail Parker into paying her to let her help him, the mobster back in Chicago has sent a hitman after Parker. He tracks Parker to Palm Beach. So, the question becomes, can Parker escape the mobster’s death trap and at the same time get his revenge on Melander’s gang, with or without Leslie’s help?

PARKER is an entertaining, realistic crime thriller, despite some possible plot holes. Jason Statham makes a good Parker, even with his English accent. It’s a role that Lee Marvin has done well already, and another 1960s acting icon, Steve McQueen, could also have done really well (McQueen appeared in a movie, THE GETAWAY, by another famous crime novelist, Jim Thompson, so he never felt the need to star in a movie based on Westlake’s iconic character).

Of course, Parker always gets away with his crimes, and that’s the case with this movie. PARKER also has a lot of strong foul language. There’s also a revenge theme and some very strong bloody violence, such as a knife wound through the hand.

Thus, the main messages and some of the other content in PARKER are immoral and totally unacceptable, even though the title character remains true to his girlfriend, Claire, despite a nice kiss from the other woman in the story. As advertised, Parker is always true to his word. He really does do what he says he’ll do. He doesn’t kill innocent people, though he’s not above killing mobsters, hitmen or other criminals who betray him or whose selfish actions result in the death of innocent people. All that may be commendable, but not if the ultimate goal is to make a living through stealing other people’s property for personal gain!

Apparently, the fascination with the Parker novels is the idea of vicarious thrills. Also, Westlake is clearly a talented writer. Some of his comic novels, THE SPY IN THE OINTMENT for instance, are really hilarious. One might also recommend what is possibly the funniest, most absurd password ever invented, from THE HOT ROCK, “Afghanistan Banana Stand.”

That said, PARKER (including the title character) is a vicarious thrill that media wise people will want to avoid. Also, the average moviegoer himself or herself might lose interest in this admittedly niche genre piece. There’s lots of suspenseful action in PARKER, but fans of Jason Statham and Jennifer Lopez, or the other cast members, may want to see more, or see something else. In addition, throughout the years, MOVIEGUIDE® has shown that the average moviegoer himself doesn’t usually (but not always, of course) flock to movies that cross certain ethical or religious lines. The Parker novels and movies seem to fit that conclusion. They are a kind of entertainment artifact with too small a potential fan base or audience, especially given what’s still left of Western Civilizaton’s Judeo-Christian heritage in today’s modern pagan society.