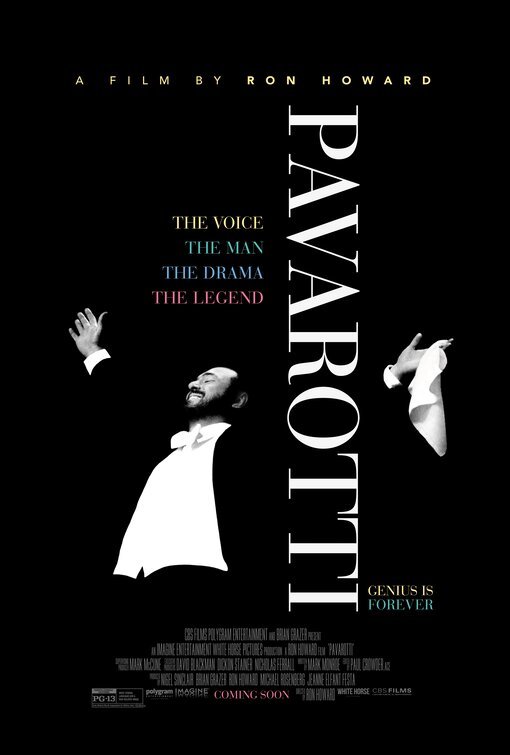 PAVAROTTI is a wonderful, fascinating documentary about the famous opera singer, who made opera popular for modern audiences. Directed by Ron Howard, the movie details Luciano Pavarotti’s life and career, from childhood during World War II in Italy to his death in 2007. After marrying his first wife in 1961, Pavarotti won his first claims to fame in 1963 when he performed in the opera RIGOLETTO. Another performance in another opera in 1966 gave him the nickname “King of the High Cs.” Pavarotti kept climbing the ladder of success until he became the most popular opera singer of all time. Two love affairs put a damper on his family life, with the second affair leading to divorce and a second marriage.

Of course, the music in PAVAROTTI is glorious. It’s definitely the best part of the documentary. Despite his personal flaws, the emotional highlights of Pavarotti’s life and career are rather inspiring. He also had a charismatic, caring, jovial personality that overshadowed those flaws. PAVAROTTI has some positive Christian, pro-capitalist, moral elements, but a rock star being interviewed utters a couple “f” words.

(BB, CC, CapCapCap, M):
Dominant Worldview and Other Worldview Content/Elements:
Strong moral worldview extolling the power of great music, with some positive references to Christianity, including a clear presentation of the Gospel in one operatic aria, plus a very strong pro-capitalist message where an extremely talented singer works hard to become a success and gives back to society through charity
Foul Language:
Four obscenities (two “f” words by a rock star who’s supposed to be a Christian) and two OMGs
Violence:
Some implied opera violence including one dying opera character has blood on his face in a couple scenes, and there’s a reference that the title character probably saw some death when he was a child during World War II, and there’s an archival image of people having been hung on a wall
Sex:
Discussion of married man’s two mistresses, the second of which leads to divorce, marriage and an unwed pregnancy
Nudity:
No nudity
Alcohol Use:
Brief alcohol use
Smoking and/or Drug Use and Abuse:
No smoking or drugs; and,
Miscellaneous Immorality:
Title character neglects his family for his career.

PAVAROTTI is a wonderful, fascinating documentary about the famous opera singer, who made opera extremely popular for modern audiences. Directed by Ron Howard, the movie contains positive Christian references and shows how the magnificence of Pavarotti’s voice and his joy for life brought pleasure to rich and poor, high and low, but the movie also mentions the Catholic singer’s infidelity during his first marriage and his second marriage to a woman 34 years younger, plus rock singer Bono of U2 says a couple “f” words during interviews with him where he discusses his professional relationship with Pavarotti.

The movie briefly touches on Luciano Pavarotti’s childhood, where he witnessed some of the horrors of World War II from age 4 to 10. At age 9, Pavarotti began singing with his father in a church choir. His mother convinced him to train as a teacher, which he did for two years. Then, in 1954, at 19, he began training his voice.

After marrying his first wife in 1961, Pavarotti won his first claims to fame in 1963 when he sang in RIGOLETTO at the Vienna State Opera and filled in for a famous opera singer in the same opera while playing at the Royal Opera House in Ireland. That same year, he worked with the world-renowned Joan Sutherland, who gave him some invaluable tips on his breathing technique. In 1966, he wowed opera audiences with his performance as Tonio in Donizetti’s DAUGHTER OF THE REGIMENT, which required him to sing no less than nine High Cs. After that performance, he became known as the King of the High Cs.

The praise kept coming for Pavarotti when he debuted in the same role at the Metropolitan Opera in New York in 1972. The next year, Pavarotti decided for the first time to start doing concerts. When he asked his manager at the time what should he do with his hands, the manager suggested that he hold his white handkerchief, and the white handkerchief became a signature part of his solo concert performances. Then, in 1977, the first live television performance of an opera at the Met, starring Pavarotti in LA BOHEME, became the highest rated opera performance on American TV at that time.

Howard’s documentary hits all of these highlights and more. It documents Pavarotti’s first trip to China in 1988, and his work as part of “The Three Tenors” with Placido Domingo and Jose Carreras in the 1990s just after Jose won a battle with leukemia. Pavarotti also started singing for charity with famous rock stars in the 1990s, including Bono and U2.

About midway through the movie, viewers learn about Pavarotti’s 10-year affair with his personal assistant, a soprano named Madelyn Renee. Then, in 2003, his mistress at the time, another personal assistant, had a twin baby girl (their twin baby boy was born stillborn). Later that year, he divorced his wife of 32 years and married this mistress, Nicoletta, who was 34 years his junior. The affair caused a rift between Pavarotti and his three other daughters by his first wife, a relationship that was restored when Pavarotti became ill.

Despite these personal issues, several people interviewed discuss Pavarotti’s love for meeting people and bringing joy to his fans. Time is also spent on outlining some of the charity work Pavarotti did through his music.

Two highly emotional moments occur when Pavarotti discusses a serious illness that affects his youngest daughter and when Pavarotti mentions the stillborn birth of his son. Everyone thought his daughter was going to be paralyzed for life, but Pavarotti says a “miracle” occurred, and she was cured completely by God.

PAVAROTTI also contains many other positive references to Christianity. At one point near the end, an aria sung by Pavarotti presents the Gospel of Salvation of Jesus Christ in the clearest terms possible. Eventually, Pavarotti reconciled with his older daughters and with his ex-wife. Life’s too short to hold a grudge, his ex-wife implies.

Of course, the music in PAVAROTTI is absolutely glorious. It’s definitely the best part of the documentary. Despite his personal flaws, the emotional highlights of Pavarotti’s life and career are rather inspiring. He also had a charismatic, caring, jovial personality that overshadowed those flaws. PAVAROTTI has some positive Christian, pro-capitalist, moral elements, but Bono, the rock star, utters a couple “f” words while being interviewed about Pavarotti and their professional relationship. So, caution is advised for older children.