"Taking on a Farming Giant" 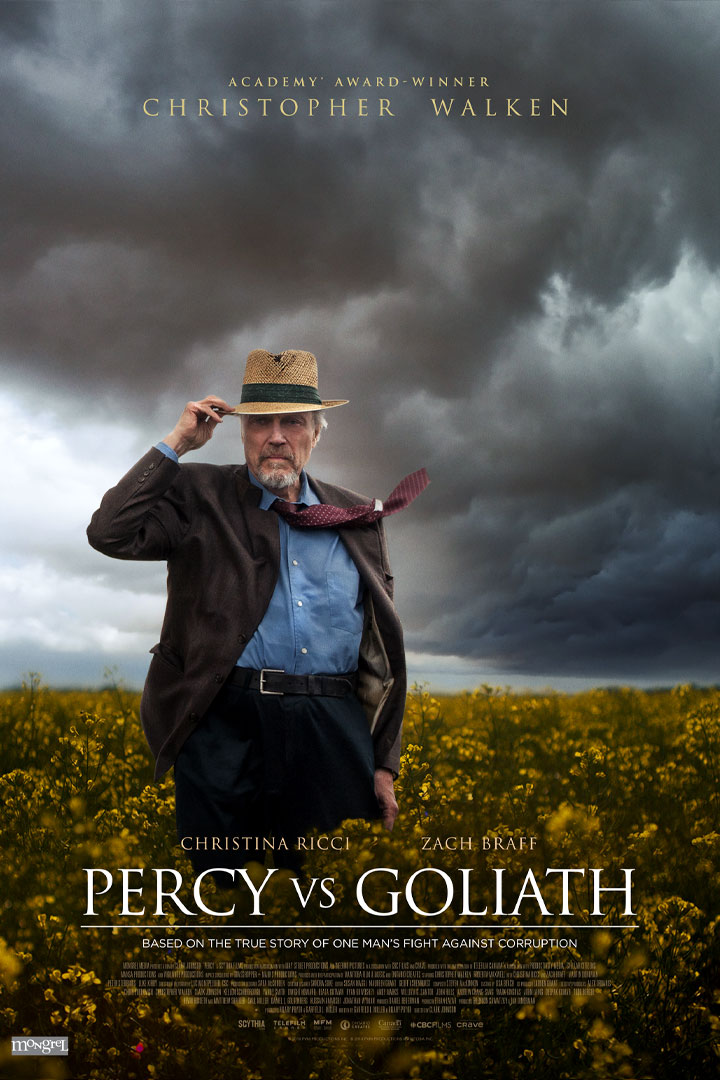 Based on a true story, PERCY VS. GOLIATH follows one Canadian farmer during the late 1990s in his fight against a major farming organization. Monsanto Canola accuses Percy of using a patented seed for his harvested crops. It becomes clear that Percy is an underdog fighting for his livelihood. As he and his family seek public support for their cause, they fight for farmers everywhere, not only in Canada but also around the world.

PERCY VS. GOLIATH features a solid cast. Christopher Walken leads the charge as the virtuous Christian with integrity. PERCY VS. GOLIATH has some mixed elements, however. The lead character and his wife are Christians who stress the value of going to church, prayer and doing good. The movie also has strong environmentalist elements promoting organic farming. However, it also champions a pro-capitalist viewpoint where multiple people should participate in the farming market. In one sequence, a Hindu man in India is seen chanting and another man talks about how cows are sacred. PERCY VS. GOLIATH also contains brief, but mild foul language. MOVIEGUIDE® advises caution for older children.

(CC, BB, CC, EE, CapCap, FR, L, V, A, M):
Dominant Worldview and Other Worldview Content/Elements:
Mixed worldview where the lead character and his wife are Christians and stress the value of going to church, prayer and doing good, mixed with some strong environmentalist content that stresses organic farming techniques, but movie also champions a pro-capitalist worldview where multiple people should participate in the farming marke,t and the hero is an individual farmer going against a large corporation trying to have a more of a monopoly and stifle competition, plus the lead character ventures to India where a Hindu man is chanting, and another talks about how cows are sacred
Foul Language:
One OMG profanity and three relatively light obscenities (“d,” “h” and an a**), plus implied urination
Violence:
Man cocks a gun to scare some trespassers, and there’s mention of many farmers in India committing suicide after big farming companies took away their livelihood
Sex:
No sex
Nudity:
No nudity
Alcohol Use:
Scene at a bar
Smoking and/or Drug Use and Abuse:
No smoking or drugs; and,
Miscellaneous Immorality:
Intimidation and lying.

Did you know that patented genes exist? Well, if you don’t, you’re in for a wealth of knowledge in the new drama PERCY VS. GOLIATH.

Based on a true story, PERCY VS. GOLIATH begins in Bruno, Saskatchewan in August 1998 at a church. An older gentleman named Percy Schmeiser is a down-to-earth farmer with a wife, grown son and granddaughter. Percy has been farming for decades and knows how the weather, crops and business side of farming need to work together for a good product.

However, one day, Percy gets a notice he’s being sued by a major corporation, Monsanto Canola, because he allegedly planted seeds that they patented. Percy teams up with a lawyer named Jackson Weaver to go to court. From Percy’s perspective, he didn’t intentionally plant seeds with malice and didn’t know patented seeds were even a thing.

Percy’s legal predicament garners the attention of an environmentalist named Rebecca Salcau. She approaches Percy and his wife on more than one occasion, insistent that, if they share their story, this could affect the usage of GMOs internationally and stop big farming corporations from not only a monopoly on the farming market, but also from diffusing their toxic pesticides to crops on a bigger scale.

Reluctantly, Percy and his wife agree to do media interviews and eventually even cash checks from other invested farmers who want to support their cause. Percy goes so far as to travel to India to speak at a farming conference about his unsettling run-in with Monsanto Canola. However, he gets a devastating phone call that his wife took a fall down the stairs in his absence.

Upon returning home, Percy must decide what matters to him the most. Should he take his case all the way to the Canadian Supreme Court or fold to Monsanto Canola?

PERCY VS. GOLIATH features a solid cast. Christopher Walken leads the charge as a do-gooder with integrity who fights to be heard. Zach Braff, in a departure from his usually funny movies, is an odd, but ultimately satisfying choice as the lawyer. Stringed music helps set the move’s dramatic tone. Overall, however, PERCY VS. GOLIATH isn’t not so much entertaining as it is informative, with talented, award-winning stars who help bring the story to life.

PERCY VS. GOLIATH has a mixed worldview. The lead character and his wife are Christians who stress the value of going to church, prayer and, finally, doing good. There’s also some strong environmentalist elements that stresses organic farming techniques. However, the movie also champions a pro-capitalist worldview contending that multiple people should participate in the farming market. Of course, the movie’s hero is a small individual farmer trying to buck a large corporation trying to stiffly competition. In one sequence, Percy travels to India where a Hindu man is seen chanting and another man talks about how cows are sacred, but those religious elements aren’t stressed. PERCY VS. GOLIATH also has brief foul language and a mention of farmers in India killing themselves after big farming companies took away their livelihoods. MOVIEGUIDE® advises caution for older children.