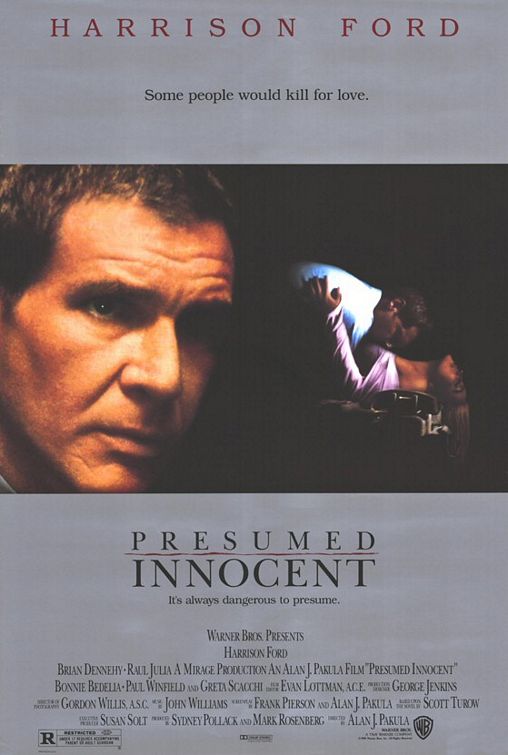 PRESUMED INNOCENT is an intriguing movie which could have been entertaining if director Alan Pakula had chosen an appropriate point of attack to open the film and deleted an artificial ending. As it is, PRESUMED INNOCENCE fails to capture the audience’s attention until one third of the way through the film when the hero suddenly finds himself in jeopardy. Up to that time, the movie is more like a big budget remake of a “Hills Street Blues” television episode, with excessive profanity added for the big screen. Once the movie takes off, however, the profanity fades, and some positive references to God are even expressed.

As the movie opens, Rusty Sabich, the chief deputy assistant prosecuting attorney in Raymond Horgan’s county office, finds out that another assistant attorney, Carolyn Polhemus, has been murdered, with the suspicion she was first raped by one of the sex offenders she routinely prosecuted. Since Horgan is up for election, he orders his best attorney, Rusty, to take the case. The case is suspicious because there is no sign of forcible entry into Carolyn’s apartment, or into the victim. Complicating matters is Horgan’s opposition for the office of prosecuting attorney, Nico, whose assistant, Tony Motto, is passing information to Nico from inside the office.

Setting up the case is long and tedious, until Nico is elected prosecutor and immediately accuses Rusty of murdering Carolyn, even serving him with an arrest warrant. Rusty is worried and confused because he did have an illicit affair with Carolyn.

This case is even more confusing because a suspicious misfiled five-year-old case points to Nico’s lackey, Tony Motto, as arranging a bribe for a judge on the local bench — Judge Lyttle, who happens to be selected to try Rusty for murder. Another complication is Rusty’s wife, Barbara, who hated Carolyn and felt abandoned by him.

Finally, the worst insult is that after years of loyalty to Raymond Horgan, Horgan testifies against Rusty at the trial because he too was sleeping with Carolyn. It seems that Carolyn had spent years sleeping her way up the ladder, from her first husband, the dean of her law school, who admitted her to law school even though she had no academic records and he didn’t know anything about her past, to Raymond, who hired her as an assistant prosecuting attorney without having her checked out by personnel (The film conveniently overlooks the fact that no one could obtain such a legal position without first getting their background checked out thoroughly). When Rusty could no longer advance her career, she moved on to Horgan, demanding in return that he make her the chief deputy.

Thus, all the men she left behind have a motive for killing her. Due to a stroke of fate and an excellent defense by his attorney, Sandy, Rusty is cleared of all charges by Judge Lyttle (you guessed it, he also slept with Carolyn). Judge Lyttle wishes Rusty well after admitting that it looks like Nico and Motto set Rusty up.

After this satisfying ending, a second ending is added where Rusty finds the murder weapon, discovers the murderer and says in a voice-over that punishment was meted out. This second ending does nothing but muddle the film.

PRESUMED INNOCENT is a mixed bag. The beginning and ending are horrendous, but the middle is excellent, entertaining the audience and giving them food for thought about the breakdown of our system of justice due to the collapse of personal morals. In fact, like FATAL ATTRACTION, PRESUMED INNOCENT condemns adultery, adding that “thou shalt not bear false witness,” nor commit murder.

However, it seems like the director did not grasp the moral rectitude of his premise. Thus, he overloads the picture with fornication, nudity and excessive profanity (uttered by everyone from the lab technician up to the prosecuting attorney). These additions are neither good drama, nor realistic.

Having worked at the U.S. Attorney’s Office in New York, I can report first hand that this type of language and immorality would have been routed out very quickly. This excessively profane language demeans the intelligence of attorneys who in real life would be analyzing the law, the facts and logic in developing their cases, not resorting to infantile curses and pronouncements.

The music is good, and the sound editing is excellent. The camera work is dark, but memorable (low-level guttural conversations accompany), but the script does not sustain the story. Given Alan Pakula’s long track record of fine films, he can not be presumed innocent of failing to exercise the care needed to bring this best seller with a good message to the big screen in a more satisfying way.