PREY FOR THE DEVIL

"Marred by Some False, Aberrant Theology" 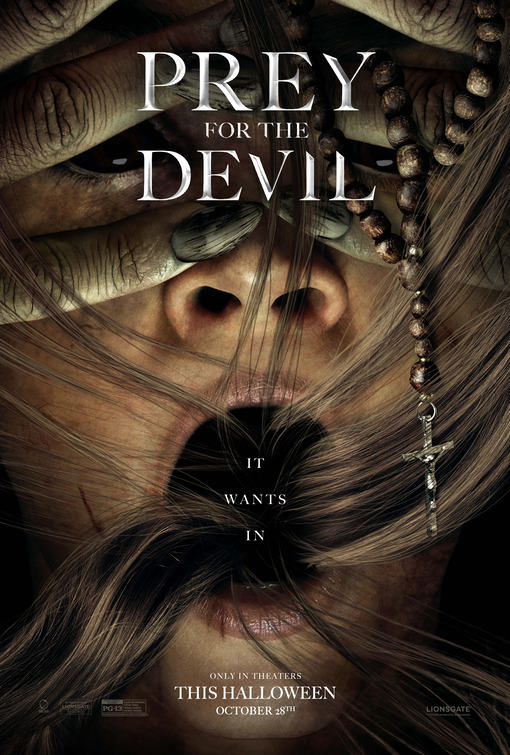 PREY FOR THE DEVIL is a supernatural horror movie about a young nun being harassed by the Devil. Sister Ann is a nurse attending a Catholic school and hospital for training priests to be exorcists and treating patients who may be demon-possessed. The priest running the training program realizes Sister Ann has a unique empathy for the patients. So, he allows her to participate in exorcist training classes. Sister Ann develops a special bond with Natalie, a young patient. She discovers that the demon inside Natalie is the same one who harassed her mother years ago.

PREY FOR THE DEVIL is well done. Also, the actors do a good job of drawing viewers into the scary story. The movie has only two obscenities and no lewd behavior. However, its strong Christian worldview is marred by lots of scary, intense violence involving demonic forces. PREY FOR THE DEVIL also has some false, aberrant theology and humanist feminism. For example, like other exorcism movies, the demons are too powerful. The false theology in PREY FOR THE DEVIL pushes the movie into unacceptable territory.

(CC, BB, FRFR, PC, H, Fe, L, VVV, S, M):
Dominant Worldview and Other Worldview Content/Elements:
Strong Christian, biblical, moral worldview includes a baptismal death, cleansing and resurrection, strong examples of sacrifice, and strong Christian references, but it’s marred by some false, aberrant theology that makes the Devil’s demonic forces too powerful and by some references that make it seem that the Virgin Mary replaces Jesus and by brief politically correct attitudes of secular humanist feminism (in one secret exorcism scene nun sacrilegiously appears in priest’s collar and skirt, supposedly to fool the demon)
Foul Language:
one “s” obscenity and a demon calls a nun the “b” word
Violence:
Scary, intense and occasionally gross violence that’s strong and sometimes a little excessive includes demon-possessed mother pounds her head on young daughter’s locked bedroom door, demon tries to strangle girl to death by making her choke on her long hair, demon flings priests against walls and objects, demon-possessed girl disappears under bed and grabs priests legs and he’s knocked unconscious, demon attacks young girl and makes bloody marks on her face, demon sets crucifix and priest on fire, demon causes possessed people to contort their bodies, demon causes ceiling fan blades to fling across the room during an exorcism ritual, demon-possessed character climbs wall, holy water burns a patient’s back, demon possessed character falls into large baptismal fount full of holy water, character’s dead body shown with a pool of blood under the character’s head, demon-possessed woman appears to have some kind of demonic creature crawling inside her belly (it’s said in the movie that she feels guilty and shameful for having had a child out of wedlock and that’s how the demon came to find a way to possess her), woman pulls a hair out of her eye, video of a woman shows her removing a prosthetic from her nose and mouth to reveal a gaping hole
Sex:
References to two unwed pregnancies and the guilt and shame associated with that situation
Nudity:
No nudity
Alcohol Use:
No alcohol use
Smoking and/or Drug Use and Abuse:
No smoking or drugs; and,
Miscellaneous Immorality:
Young nun disobeys orders.

PREY FOR THE DEVIL is a supernatural horror movie about a young nun being harassed by the Devil who tries to help a young girl in Boston who’s undergoing exorcism rituals by the priests running an exorcism school and two of the top students. PREY FOR THE DEVIL is well made, with few obscenities and no lewd content, but it has lots of scary, intense violence involving demonic forces, and its strong Christian worldview is marred by some false theology and secular feminism.

The movie opens with a scene of Sister Ann’s demon-possessed mother harassing her as a young child. The demon inside her mother tells little Annie he’s really after her, not her mother, because Ann is going to serve God in a mighty way.

Cut to Boston, where Sister Ann is a nurse attending a Catholic school and hospital for training priests to be exorcists and for treating patients who may or may not be demon-possessed. A female psychologist helps the priests decide whether the patients are suffering from physical or mental issues instead of demonic harassment. The Vatican doesn’t allow nuns to be exorcists, but the black English cleric in charge of training the priests, Father Quinn, realizes Sister Ann has a unique empathy for the patients. So, he allows her to sit in on exorcist training classes.

Sister Ann develops a special bond with a young patient named Natalie. Eventually, she discovers that the demon inside Natalie is the same one who harassed her mother years ago. Also, the demon still wants Sister Ann to let him inside her, to claim her soul and stop her from serving the Church anymore.

PREY FOR THE DEVIL is a regrettable title because of its double entendre nature. However, the movie is well done, and the actors do a good job of drawing viewers into the scary story. Also, the movie has only two obscenities and no lewd behavior.

Despite that, the movie’s strong Christian worldview is marred by lots of scary, intense violence involving demonic forces. PREY FOR THE DEVIL also has some false, aberrant theology and humanist feminism. For example, like other exorcism movies, the demons are too powerful. In addition, the movie has some aberrant references to the Virgin Mary. For example, one scene shows a statue of Mary standing in front of a cross, implying that she assists Jesus or even replaces Him. Another scene shows that Sister Mary has an image of the Virgin Mary on the rosary she carries, not just a Crucifix. In still another scene, the female psychologist encourages Sister Ann to keep challenging the status quo in the Catholic Church that “limits” the role of women. Her argument, however, isn’t based on any specific biblical principle, but on the typical, false, politically correct, secular humanist feminism of the secular, godless forces trying to achieve absolute power in today’s world. Later, Sister Ann dons a priest’s collar and frock to lead a secret exorcism ritual with a young priest friend.

Finally, PREY FOR THE DEVIL ends in a victory for those who serve God through Jesus Christ, but an epilogue shows that the demonic forces are still out to get Sister Ann. The epilogue clearly sets up horror fans for a possible sequel.

MOVIEGUIDE® believes the false theology in PREY FOR THE DEVIL pushes the movie into excessive, unacceptable territory. It’s a bit borderline, however. The movie should be commended for showing that victory is possible through Christian faith. The filmmakers could have made this even stronger, though.