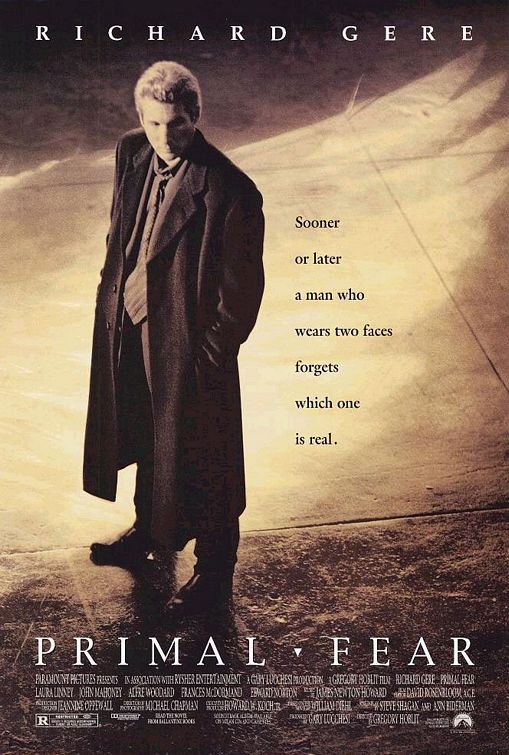 PRIMAL FEAR depicts a Chicago defense attorney, played by Richard Gere, who is not concerned with the guilt or innocence of his defendant, but only with his own reputation. Taking a case involving the murder of an Archbishop, he discovers that some people can effectively wear two faces. Smearing a church leader and containing sex, violence and anti-Christian bigotry, it has a very surprising trick ending resulting in a mediocre movie with an exciting ending.

PRIMAL FEAR depicts a Chicago defense attorney who is concerned only with his own reputation. Martin Vail, played by Richard Gere, wants to advance his own career and seal a book deal. The defendant is alter boy Aaron Stampler, who is convicted of killing an Archbishop. When his story is broadcast all over the evening news, Vail goes to Stampler and tells him he will take his case for free. Grateful, Stampler pleads innocence, and soon everyone discovers he is not criminal, but rather insane. Thus, the judge decides Stampler needs not incarceration, but hospitalization. When Vail goes to inform Stampler of this change of events, Vail himself discovers a change that completely turns the tables on his and everyone else’s expectations.

Slow moving at first, this mediocre crime story has an exciting ending. However, PRIMAL FEAR represents another smear against the Church by portraying a despicable Archbishop with heinous secrets. This movie could have been equally effective with a villain in another line of work. Paramount Pictures has asked the press to not reveal the surprise ending of this movie, but like the nefarious CRYING GAME, it will probably soon be understood. So, if thrillers with violence and sex are your style, don’t tell anybody how this movie finishes. If you don’t like anti-Christian bigotry, avoid this mediocre movie.