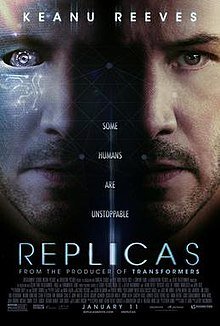 REPLICAS is a science fiction thriller starring Keanu Reeves. Scientist Will Foster is working on a secret project to take the intelligence of human brains through neurological pathways and implant it into robot android bodies. When his wife and three children die in a car accident with him driving, Will doesn’t call the police but enlists the aid of his assistant to implant their minds into robot bodies. All manner of coverups and lies follows. Then, Will and his android family go on the run when his boss sends hitmen after them to kill Will and bring back the family as company property.

REPLICAS is shockingly slow and tone-deaf from start to finish. Worse, there are ridiculous lapses in logic throughout, with contradictions galore. Reeves brings his laconic style from the successful JOHN WICK movies to this part, but it doesn’t work here. Everyone in REPLICAS looks like they’re bored to be there. There’s a potentially interesting science and theology debate to be had from REPLICAS, but the filmmakers don’t really bother. REPLICAS also has lots of foul language and some intense violence.

(HH, B, LLL, VV, S, N, A, MM):
Dominant Worldview and Other Worldview Content/Elements:
Strong implied humanist worldview that doesn’t question scientist’s crazy and unethical plan to transfer the minds of his dead wife and three children, who died accidentally, into robot bodies, the scientist doesn’t believe in a soul or an afterlife or a system of right and wrong, but his wife raises questions about these issues, then drops them rather quickly
Foul Language:
29 obscenities, three strong profanities, four light profanities
Violence:
Some intense violence and light violence include a tree branch crashes through front window of a car in a severe storm and kills a wife and mother instantly, car careens over a high ledge off a road and into water with three kids in the back seat who drown off camera, father carries all their bodies out of the water, man violently injects another man with a drug syringe and knocks him out with a blunt object, two hitmen chase a family on foot and then in a car chase, two hitmen kidnap children and their mother who’s minds have been transferred into android bodies, cloned children describe traumatic nightmares, a robot tears itself apart, while a man’s voice is heard screaming in anger, because the man is upset to learn his thinking process has been implanted into the robot. A scientist pokes a needle into his eye as part of the cloning process, which is wince-inducing but not bloody
Sex:
Two brief, very light sexual references to “making love,” and a boat named “Cheating Hussy”
Nudity:
In a cloning tank filled with liquid, a woman is seen naked from a side view, no explicit visuals however, shown in a scientific non-prurient context
Alcohol Use:
Brief alcohol use
Smoking and/or Drug Use and Abuse:
No smoking or drugs, characters are given sedatives; and,
Miscellaneous Immorality:
Scientist has to decide which of his four family members will have to remain dead because of insufficient pods for the transition, and a brazen disregard for scientific ethics and morals abounds throughout, with lying and cover-ups rife as well.

REPLICAS is a science fiction thriller about cloning starring Keanu Reeves. Scientist Will Foster is working in Puerto Rico on a top-secret project to clone human beings by taking the intelligence of human brains through neurological pathways and implanting it into robot bodies. This is not only cutting-edge science but also highly unethical and leads to disastrous results, such as when a dead soldier’s robot body tears itself apart when he realizes what’s happened.

Things take a turn for the weirder and worse when a tragic accident in a rainstorm causes Will to careen off the road with his wife Mona and three kids in the car and plunge into a river. Will’s wife and children drown. Rather than mourn them like a normal husband and father after bringing their bodies to shore, Will instantly calls his main colleague Ed and asks him to bring the equipment needed to preserve their bodies well enough to clone them immediately.

Will wants to keep them alive for his own personal happiness, but also believes that succeeding with them will help him succeed with his official test subjects. At first, Ed is freaked out by Will’s idea and refuses. However, he soon relents, and they find that they’re caught in a race against time to make their project succeed before they lose their jobs. They also have to guard against the authorities closing on their insane project. Meanwhile, Will constantly worries if he’s caused some irreparable damage to his family. Thus, he begins all manner of coverups and lies, while on the run from his boss’ security detail who are out to kill Will.

This may sound like an exciting storyline, but REPLICAS is shockingly slow and tone-deaf from start to finish. Director Jeffrey Nachmanoff runs what should even be the most exciting scenes at a slow pace and incredibly quiet sound levels. The entire production seems cheap, even though there are 26 credited producers, a number that’s utterly ridiculous and above the norm. There are awkward shots of extras filling out the backgrounds of scenes, and a long car chase that only veers around a slow garbage truck. Worse, there are ridiculous lapses in logic throughout, and contradictory aspects jump out of the screenplay as well. Keanu Reeves unrealistically shows no remorse over the death of his family, instantly turning them into the next phase of his science project. At the same time , Thomas Middleditch as his colleague Ed protests strongly one moment then utterly caves the next.

There is a potentially interesting science and theology debate to be had from REPLICAS, but the filmmakers don’t really bother. Reeves doesn’t believe in souls and the afterlife or a system of right and wrong, while his wife does and simply disagrees for a moment before dropping her objections. A brazen disregard for scientific ethics and morals abounds throughout REPLICAS, with lying and cover-ups rife as well.

Reeves has brought his laconic performing style from the successful JOHN WICK movies to this part, but it doesn’t work here. Everyone in REPLICAS looks like they’re bored to be there, and so will any viewers who choose to watch this mess.