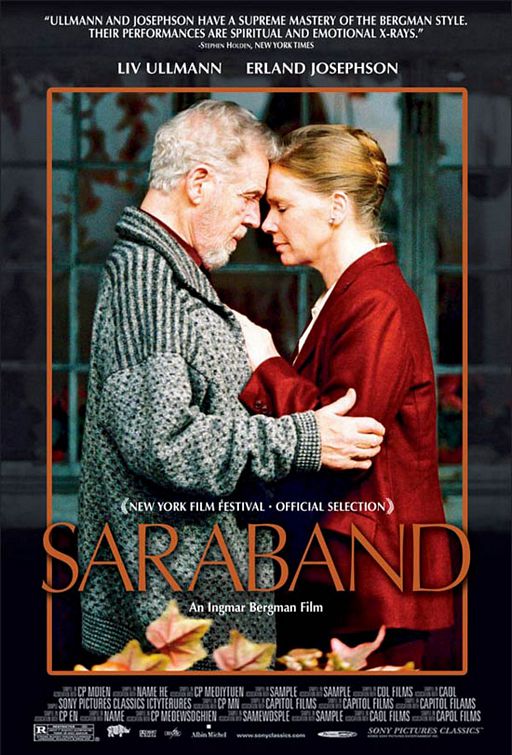 Acclaimed Swedish director Ingmar Bergman directs SARABAND, a kind of sequel to SCENES FROM A MARRIAGE starring Liv Ullman and Erland Josephson. In the story, Marianne goes back to visit her former husband Johann after 30 years of estrangement. Marianne meets Johann’s son, Henrik, and Henrik’s daughter Karin. There is a cloud of oppression over the family, because Henrik’s beloved, saintly, Christian wife Anna died two years ago. Henrik has resigned his professorship in music and spends his days teaching the cello to his daughter Karin. A series of two monologues and eight dialogues provides profound insights into the four characters.

Bergman is at the top of his game here. The cinematography and techniques he uses are flawless. The music becomes a character itself. And, there’s not one weak actor in the bunch. This movie makes you appreciate great acting and covers the gamut of human emotions. Regrettably, the ex-husband appears fully nude at one point in the movie, and scenes of familial hate and hints of incest are very disturbing. The movie contains moments of Christian hope, however, which is interesting considering Bergman’s apparent rejection of Christianity in some of his 1960s movies.

(Pa, C, H, Ro, PM, LLL, V, S, NNN, AA, MM) Mixed smorgasboard of worldviews representing four main characters including Christian compassion and prayer, humanist Freudianism, Romanticism, and post-modernism (PM); 27 obscenities, six profanities (three of the profanities are exclamations and appeals to God); father attacks daughter to keep her from leaving (not much shown), son sweeps objects off father’s desk in a fury, man attempts suicide with a brief shot of his bloody body; hints of incest not pursued such as Swedish father and daughter share same bed in cottage and father briefly French kisses daughter, ex-wife sleeps with husband after 30 years though no fornication, a kiss and a hug; full frontal male nudity of 80-something man and full shadow nudity of 63-year-old woman; excessive drinking; and, disturbing relationships with mean-spirited attacks between family members.

Acclaimed octogenarian Swedish film director Ingmar Bergman continues to be an interesting, captivating filmmaker who makes movies his way. Bergman adheres to few of the Hollywood conventions (that also can make great movies by the way). Bergman creates a smorgasbord of human emotions that compels the voyeuristic attention of the audience. No other director does it quite this way, and no one else has succeeded attempting this approach.

Bergman’s latest film, SARABAND is a concerto grosso, or concert for the full orchestra, featuring four soloists. Marianne, played by Liv Ullman, goes back to visit her former husband Johann after 30 years estrangement. Thus, the movie picks up the threads established in Bergman’s SCENES FROM A MARRIAGE, the story of the couple’s breakup. Johann is gruff and disdainful, as always, but quickly embraces Marianne. When she tells him that she still is hurt by his unfaithfulness that destroyed their marriage, he brushes her off with the statement that it doesn’t bother him. Marianne stays for several months. Johann is now in his 80s and Marianne is 63.

Marianne meets Johann’s son, Henrik, and Henrik’s daughter Karin. There is a cloud of oppression over the family, because Henrik’s beloved, saintly, Christian wife Anna died two years ago. Henrik has resigned his professorship in music and spends his days teaching the cello to his daughter Karin.

Karin finds a letter from her mother telling Henrik that he must not become too possessive of Karin and must let her go live her own life. Henrik’s relationship with Karin has hints of an incestuous love, but there’s only one brief kiss that is repulsed.

Henrik hates his father Johann and Johann hates him. Johann inherited millions and resigned his professorship. When Henrik asks for money, Johann belittles and demeans him.

Marianne meanwhile seems to have found some evidence of faith. She goes to a little country church and prays. In brief, Marianne is an incipient Christian who drinks to much, but is full of compassion. Johann is a Freudian, stern and cruel. Henrik is a hopeless Romantic. And, Karin is a postmodern, who eventually abandons her past.

Instead of a three-act movie, SARABAND consists of ten dialogues. The prologue and epilogue consists of Marianne talking to us the audience as if we were best friends. The other eight dialogues provide profound insights into the characters. The smorgasbord covers the gamut of emotions from humor, which caused the audience to laugh out loud, to despair to anxiety to familial hate, etc.

Bergman is at the top of his game here. The cinematography and techniques he uses are flawless. The music becomes a character itself. And, there’s not one weak actor in the bunch. This movie makes one appreciate great acting.

There are moments in SARABAND offering Christian hope, but there are other and frankly more frequent parts which are repugnant, including the scenes of hatred between Henrik and Johann and the hints of incest. There’s also a scene where Marianne comforts the naked Johann at night, which moves the movie into excessive minus three category, although it should be pointed out that the movie is very clinical in these portrayals. There’s very little eroticism, and the emotions are somehow both intimate and distant.

Probably the most interesting party of SARABAND is the fact that Mr. Bergman has warmed to the Christian faith, which he conspicuously and vociferously rejected earlier in his career because of his own battle with his Calvinist preacher father. Thus, there is hope.