"The Thrill Is Partly Gone" 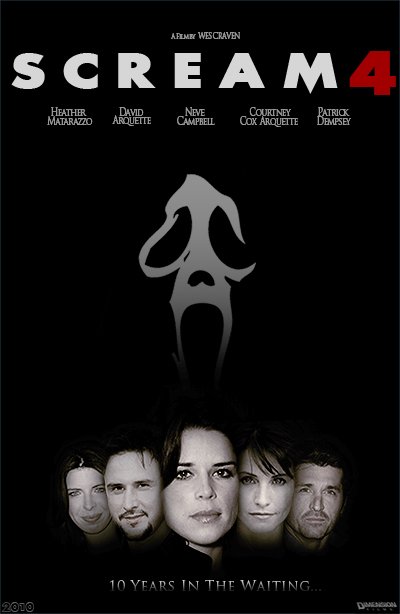 In SCREAM 4, the original trilogy’s lead character Sidney returns home 10 years later to sign and discuss a self-help book she wrote about overcoming tragedies. Sidney discovers that the killings have resumed, and she’s threatened again. As she goes into hiding, she renews friendship with Gale and Sheriff Dewey, who are married though bickering. Ultimately, they have to put their gripes aside to save each other and the town from another teenage killer.

The bloom is off the rose in this new installment, though the ending has some clever, albeit very violent, twists. There’s also some incisive dialogue on the current Internet age where completely unworthy people can become famous for no apparent reason. Some of that dialogue asserts that the quest for fame has corrupted society. Despite this, SCREAM 4’s attempts to find humor in violent, murderous mayhem remain reprehensible. Also, the reveal of the killer is less shocking than it should be because the actor playing the killer is unconvincing once they have to take off the scary mask. Thus, media-wise individuals and families will want to steer well away from this abhorrent SCREAM too.

(PaPaPa, B, LL, VVV, AA, M) Very strong pagan worldview finding humor in very violent murderous mayhem overcomes light moral elements in continuation of the slasher-comedy movie series, picking up 11 years after “Scream 3” with a mix of original series actors and current young stars; 15 obscenities and several profanities; very strong bloody violence includes about a dozen brutal murders, most by stabbing and slashing a knife into the victims, who are verbally taunted in humorous fashion before and after their deaths, a policeman gets stabbed through his forehead and bleeds out brutally over his face and front of his uniform, a teenage girl gets killed in her bedroom as her friends watch helplessly from next door, one female victim’s body is thrown off the top of a parking garage and lands on top of a TV news truck in the middle of a press conference by police, teenage killer has killed mother and attempted to kill cousin, killer tries to deceive police by stabbing self and falling, and killer electrocuted; no sex; no nudity; an illicit teenage party features numerous teenagers happily waving cups that imply having beer inside; no smoking or drugs; and, deception.

SCREAM 4 returns to the well of the horror-comedy franchise trilogy after more than a decade of peace. The performances and cinematography remain in keeping with the quality tradition of the first three movies. However, most of the action is rather average, and, since the movie involves a teenage killer and teenage victims, there’s liable to be some new copycat murders with the new movie as with the previous three.

In this installment, the original trilogy’s lead character Sidney (played by Neve Campbell) returns home to small-town California to sign and discuss a self-help book she wrote about overcoming tragedies. Sidney discovers that the killings have resumed, and she’s threatened again. As she goes into hiding, original trilogy characters Gale (Courtney Cox) and Sheriff Dewey (David Arquette) are now married and bickering, but each ultimately puts their gripes aside to save each other and the town.

The killer this time is a high school student, and the reveal is less shocking than it should be because the actor playing the killer is unconvincing once they have to show real menace without a mask on their face. Throughout the movie, there is some incisive dialogue commenting on the current Internet age in which completely unworthy people can become famous for no apparent reason, and how the quest for fame has corrupted much of society. The ending has some clever albeit violent twists. However, the frequent brutal killings coupled with sarcastic jokes about the deaths make this an abhorrent movie.