"Taking Life as It Comes" 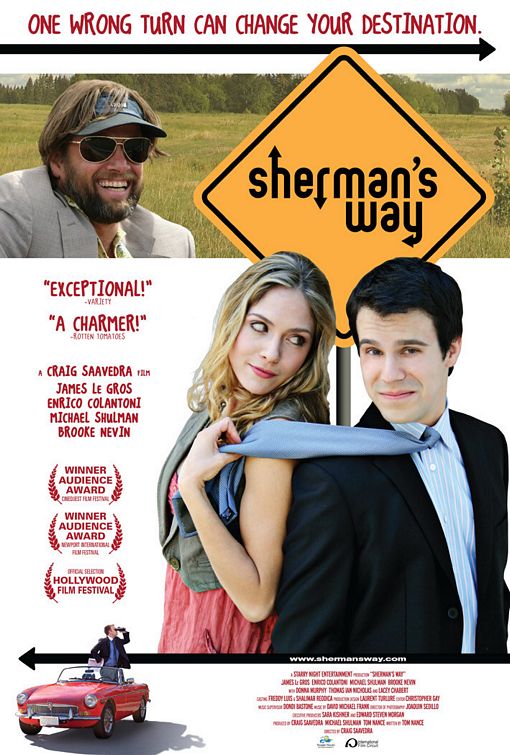 SHERMAN’S WAY is a quirky, independent movie filled with poignant humor, about two different people who are thrown together and must learn to take life as it comes. Sherman Black, a young, uptight New York lawyer with a controlling mother, is inadvertently thrown together with Palmer, a middle-aged, unsuccessful alpine ski bum. The story begins when Sherman, who plans everything, travels to Napa Valley to surprise his girlfriend, who has already moved on with her life. Sherman hitches a ride from Palmer, who can’t plan beyond the next few minutes. With the help of Palmer and a bunch of other quirky characters, Sherman learns to take responsibility for the choices he makes. Meanwhile, Palmer learns to make the most of past mistakes so he can embrace the present.

As a small movie, SHERMAN’S WAY has surprisingly good production elements including a well-written script, excellent acting and fine camerawork. The movie has many enjoyable moments and some redemptive, winsome elements (such as Palmer awkwardly trying to reconcile with his estranged son), but is ultimately marred by a Romantic worldview, excessive foul language, brief nudity, and a scene of drunkenness.

(RoRo, H, C, B, LLL, V, S, NN, AA, D, M) Strong Romantic worldview where characters are encouraged to live life to the fullest, with humanist elements where characters look to themselves to solve problems and make life-altering decisions, that ultimately overshadow some redemptive, moral elements such as a man tries to reconcile with his estranged son; 40 obscenities and seven profanities, plus man unintentionally breaks wind because he ate spicy food; brief fistfight and man crashes on a pair of skis; brief kiss between girl and boy, girl kisses boy briefly and vice versa in another scene, some brief sexual material including reference made to porn and reference made to a rendezvous between three people; naked painting of woman on motorcycle tank partially shown, upper male nudity, rear male nudity and rear female nudity when characters go skinny dipping; depicted alcohol use when characters have wine with dinner a couple of times, characters drink bottles of beer here and there throughout movie, man gives his cat a cup of beer to drink, and character gets drunk and has a hangover the next day; man smokes a cigar in one scene; and, characters are made to believe they are stealing and they go through with it, even though it turns out to be a joke, girl cheats on her boyfriend, negative parental figure who has resigned himself to being a failure and refuses to try to finish or accomplish anything although this changes by the end of the movie, and man relies on himself and his own planning to accomplish his goals.

SHERMAN’S WAY is a quirky, independent movie about two very different individuals who are inadvertently thrown together by their circumstances and must learn to take life as it comes and make the most of the experiences that come their way. Although the movie’s poignant humor makes it fairly enjoyable and entertaining, it is marred by a Romantic worldview with some light humanist elements, excessive foul language, brief nudity, and some drunkenness.

The story begins when New Yorker Sherman Black, an uptight, snobbish, momma’s boy with a sense of entitlement and a plan for everything, travels to Napa Valley for a summer internship to surprise his college girlfriend. The surprise turns out to be a bust. As the girlfriend tells him, she’s already found another guy because Sherman is not spontaneous and exciting enough for her.

Unsure of what to do next, Sherman hitches a ride from Palmer, a middle-aged, unsuccessful alpine skiing Olympian who has resigned himself to being a disappointment and a failure. Through an unfortunate turn of events, Sherman loses his wallet and finds himself cut off financially by his controlling mother, who wants to punish him for leaving New York.

With the help of Palmer and a bunch of other quirky characters, Sherman learns to take responsibility for the choices he makes. He also learns that, sometimes, the plans we make don’t always turn out the way we expect them to do. He even learns how to swim and how to drive.

In turn, Sherman helps Palmer learn from the mistakes he made in the past and to move forward with his life so he can embrace the present. Palmer is even encouraged to make amends with his estranged son, which he attempts to do, though quite unsuccessfully. Palmer realizes that, just because he was a failure in the past, it doesn’t mean that he will always be a failure.

As an independent movie, SHERMAN’S WAY has surprisingly good production elements including a well-written script, excellent acting and fine camera work. The movie has many enjoyable moments and some redemptive elements, such as Palmer trying to make amends with his son in his own awkward way, but is ultimately spoiled by its Romantic worldview, excessive foul language, brief nudity, and alcohol use resulting in drunkenness.