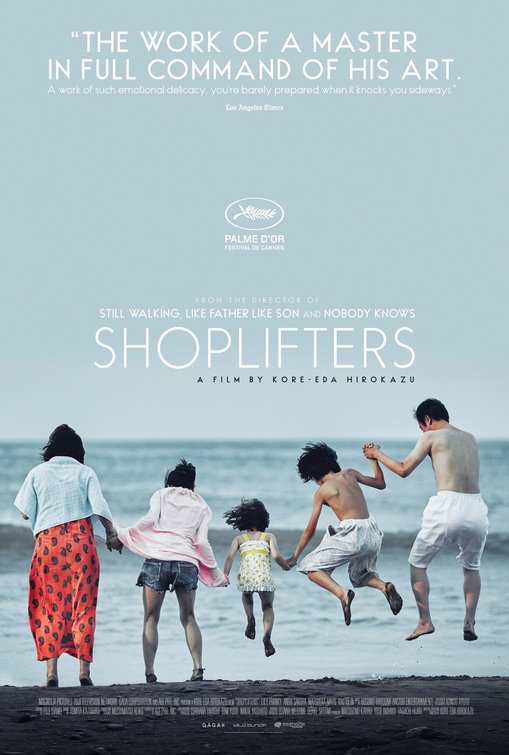 SHOPLIFTERS is a Japanese movie about an unconventional family of shoplifting criminals in Tokyo. One night after a routine shoplifting trip, a man and his young son spot a little girl sitting outside on the porch of her house. Being a very cold night, they offer her a croquette and take her home with them. After they try to return her to her house later and realize what a terrible home life she has, they decide she’s better off with them. SHOPLIFTERS is a glimpse into the life of an impoverished family in Japan, barely surviving and relying on thieving and scams to get them from one day to the next.

SHOPLIFTERS won the 2018 Cannes Film Festival and is the Japanese Foreign Film entry for this year’s Oscars ceremony. SHOPLIFTERS is a beautifully crafted but sad look into the lives of a family of criminals have a lot of good and love in their hearts. Despite this, there’s absolutely no moral compass or governing set of moral values guiding the characters. SHOPLIFTERS also contains some sexual content and nudity.

(PaPaPa, B, C, L, V, SS, NN, A, D, MMM):
Dominant Worldview and Other Worldview Content/Elements:
Very strong pagan worldview throughout the movie, as there is absolutely no moral compass or governing set of rules guiding the main characters or any other characters in the movie, they seek out to steal and scam their way through, showing no remorse or guilt for doing so, everything is done for one’s selfish desires, though there are some moral, redemptive elements of goodness, love and compassion;
Foul Language:
One obscenity, a few uses of name calling such as “dummy”, little girl wets the bed;
Violence:
Little girl has bruises and scars from being abused by her parents, and there is mention of murder and coverup, although the murder isn’t shown;
Sex:
Young woman works in an establishment where many young women simulate sex and touch themselves in front of a two-way mirror for customers, young woman asks a man when he and his wife “do it,” one implied sex scene is shown as the couple begins to kiss and then are shown post coital and discussing going for another round, little boy stares at woman’s breasts and later the man asks him if he likes breasts and discusses the little boy’s changing body and what to expect from puberty;
Nudity:
Rear female nudity shown after sex as she lies on her front side, young women are shown in their bras and underwear changing their clothes, woman is shown taking a bath, woman is shown wearing a sheer slip with a bra and underwear underneath it, rear male nudity shown on a few occasions (once taking a shower and once after sex), upper male at the beach in a swimsuit, and a girl at the beach wears a bikini top;
Alcohol Use:
People drink beer on a couple occasions with no drunkenness;
Smoking and/or Drug Use and Abuse:
Characters smoke cigarettes on multiple occasions; and,
Miscellaneous Immorality:
Very strong amount miscellaneous content, two of the main characters who are children have been taken from where they were kidnapped with justification of the people doing it and no remorse, older man teaches young boy how to shoplift from stores, and they work together to steal constantly, the little boy then teaches an even smaller girl how to shoplift only once being lightly scolded by a shop owner, almost every character has a scam or their own type of thievery from the children up to the grandmother, multiple examples of dysfunctional family including parents who beat their child and don’t report her as missing for two months because they don’t want her, multiple examples of bad role models, high amounts of moral relativism, and child abandonment.

SHOPLIFTERS is an award-winning Japanese movie about an unconventional family of criminals in Tokyo that takes in a young girl they find on the street.

The movie begins as Osamu and his little boy, Shota, are returning from a routine shoplifting trip at the grocery store. They celebrate their success at thievery by stopping at a bakery and having some croquettes. On their way home, they see a little girl on the porch of a house in the cold. Feeling concerned for the child, Osamu offers her a croquette and takes her home with them. His wife, Nobuyo, is reluctant to accept the child, as they already have quite a full house, with little means to be able to provide. However, when they return to her house to leave her with her rightful parents, they hear how violent the home is and decide that the little girl, Juri, is safer and better off with them.

As the adults go to work and about their business, Shota takes Juri under his wing and begins to teach her also how to successfully shoplift. One day at his construction job, Osamu gets injured and is unable to work, without any workers compensation. Around the same time, Nobuyo’s job is making cutbacks. She’s one of the higher paid workers, along with another woman. The woman knows that Nobuyo has Juri and threatens to report her to the police if she jeopardizes her job.

Now, Nobuyo and Osamu are both jobless, relying on scams and stealing as the only means of survival. However, when their grandmother dies in her sleep in the house, they see that as another form of income. The grandmother had her own secret schemes, and after they bury her themselves in the back of the house, Nobuyo cleans out her grandmother’s bank account and buys herself and Shota sodas.

As Shota grows older, he starts to see how the things the family is doing are wrong. He’s beginning to regret teaching Juri how to be a criminal, because she was only 5-years-old. One day, they are in the grocery store together, and he sees her start to put a bag in her pocket. Seeing a clerk nearby, he covers for her, knocking over things on the shelf, taking a bag of oranges, and running for it. The clerk begins to chase after him, and Juri after both of them. Running himself into a corner, Shota has nowhere to go. He takes the only way out, jumping over a bridge onto the street.

In the hospital, Osamu and Nobuyo claim to be his parents to the police officer, but don’t stay for long, for fear that they will be caught. They rush home, pack up all that they can carry and try to make a run for it.

SHOPLIFTERS is the Oscar entry for Japan, as well as a winner of the Palme d’Or at the Cannes International Film Festival. The movie is a slice of life story. Viewers are given a look into the lives of this unconventional family that commits crimes daily, but also has so much love to give. They live happily together, loudly slurping their noodles and trying to make the next day better than the last.

SHOPLIFTERS is a visual discussion of ethics and morals, testing the limits of right and wrong. However, there’s little to no moral compass guiding any character, as well as an excessive amount of sexual content, this movie borders on excessively immoral. Besides the innumerable crimes committed throughout, there is no guilt or remorse for them, but celebration when they succeed. Movieguide warrants extreme caution when considering SHOPLIFTERS.