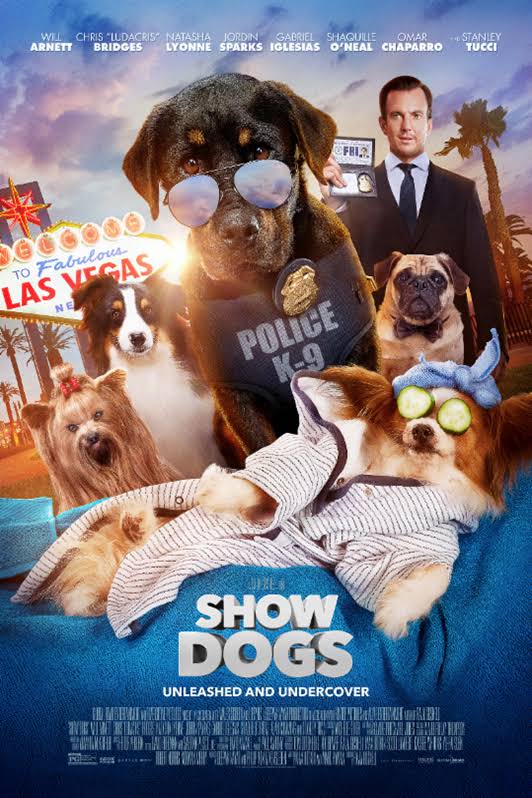 SHOW DOGS is a funny family comedy about a talking police dog forced to work with a human partner from the FBI when a baby panda is stolen. Max, the police dog, and Frank, the FBI agent, must learn to work as a team in a world that’s foreign to them – a dog show competition. The dog show is the perfect setting for the ensuing humor of two fish out of water characters trying to navigate a strange, unique world for the sake of their case. Max and Frank make new friends to help them catch the animal kidnappers and save the baby panda.

SHOW DOGS works on many different levels, offering something for everyone in the family. Most of the humor is age appropriate for children while also containing some deeper elements for adult viewers. The movie’s visuals are rich and entertaining. Best of all, SHOW DOGS teaches many moral values, including friendship, loyalty, helping others, the rule of law, choosing right over wrong, and even prayer. Caution, however, is advised for brief foul language, potty humor and some innuendoes.

(BB, C, PP, L, V, S, M):
Dominant Worldview and Other Worldview Content/Elements:
Strong moral, redemptive, patriotic worldview based on the principles of the rule of law, friendship, right and wrong, and loyalty, one of the dogs prays, there’s a race to find an animal kidnapper, and the movie encourages viewers to accept strangers;
Foul Language:
One nearly inaudible “d” word, a light profanity, use of the initials B.S., partial use of the phrase SOB (just “son of a”), some humor about passing gas, a reference to dog feces, and use of “dang” and “freaking”;
Violence:
Light violence and comic violence includes police chase a suspect, tackling, dog bites suspect’s bottom, dog bites handler, being held at gun point, light gunfire, fist fighting, animal attacks;
Sex:
Some sexual innuendo includes lines such as “flip this bird any day,” “I’ve been around the block, compare me with other dogs, and you wouldn’t find me lacking,” “turns out he wasn’t neutered after all,” and “I’m sexy and I know it,” a scene of dogs kissing, light human kissing, the plot involves an inspections of a dog's private parts;
Nudity:
No nudity;
Alcohol Use:
No alcohol;
Smoking and/or Drug Use and Abuse:
No smoking or drugs; and,
Miscellaneous Immorality:
Theft of animals, greed, and selling stolen animals to the highest bidder.

SHOW DOGS is a funny action comedy for families about a K-9 police dog and an FBI agent in search of a stolen baby panda.

Worlds collide on the street when Max the police dog meets Frank the FBI agent for the first time. In pursuit of the gang behind the panda’s kidnapping, Max and Frank trip over each other, allowing the bandits to escape with the panda, except for one bad guy. Upon interrogation, Frank and Max learn the baby panda will be sold on the black market in Las Vegas at a prestigious dog show competition. With this, Max and Frank dive into a world and partnership that’s foreign to both of them. As a result, hilarity ensues.

Once in Vegas, Frank meets up with Mattie, a dog handler and contestant, who works with the FBI. Frank decides to enter Max in the dog competition and pose as Max’s owner and handler. Meanwhile, Max manages to make friends with a cadre of characters from the dog show world. Max and Frank’s new friends work to help Max and Frank navigate the strange world of dog shows. Consequently, Max and Frank learn there’s a better way to fight crime and live life.

As a movie intended to entertain children, SHOW DOGS achieves its intended purpose. It’s a lighthearted action comedy that’s light on violence while having the right mix of humor and competitive action to keep the attention of younger viewers. It also succeeds in offering something for older viewers as well. The movie’s production values successfully create the illusion of a world where dogs talk to each other and work with humans in different capacities.

That said, there are some areas of concern for families with children and grandchildren. First, there are several jokes with sexual innuendo that raise some flags for younger children. Phrases like “flip this bird any day,” “been around the block compare me with other dogs you wouldn’t find me lacking,” and “turns out he wasn’t neutered after all” are examples of some of the innuendoes. There are also a couple questionable song lyric choices, including “look at that body,” and “I’m sexy and I know it.” Along with the innuendo, SHOW DOGS has some language problems. For example, there’s a nearly inaudible “d” word, a light profanity, and use of the initials “B.S.” Words like “dang” and “freaking” are also used, along with some potty humor. At one point, an inspection of Max’s physical attributes for the Dog Show involves an examination of his private parts. The way this is handled is mostly innocent, but the idea of it is still an occasion for caution, especially for young children. Parents should be ready to discuss why humans are different from animals, especially in regard to the examination.

While lighthearted throughout, SHOW DOGS has a surprisingly simple message that works. For both Max and Frank, life is lonely and devoid of any real companionship. They see the world only from a limited viewpoint. What the movie’s adventures grant them is the understanding of their lack. Max and Frank not only come to understand each other. They also learn how to trust those who see things differently than they do. SHOW DOGS also promotes the rule of law, loyalty and choosing right over wrong. Finally, one of the dogs prays at one point.

It’s nice to see a movie aimed at children and families that is built on friendship, teamwork and positive moral values rather than the myth of redemptive violence.  That said, caution is advised for brief foul language, potty humor and some innuendoes, including the scene involving the inspection of a dog’s private parts.

Update: With the recent discussion surrounding the movie SHOW DOGS, we want to reiterate the importance of protecting children from both overt and subtle messages in movies. While the scene about the dog’s examination was clearly made for comedic effect, it must be stressed that immoral messages can be interpreted even if unintentional by the filmmaker. This is one of the reasons the movie did not receive our highest rating of +4. Movieguide®’s original review included a caution for children, and we want to continue to strongly caution parents regarding the innuendo’s in SHOW DOGS.”