SISTERHOOD OF THE TRAVELING PANTS 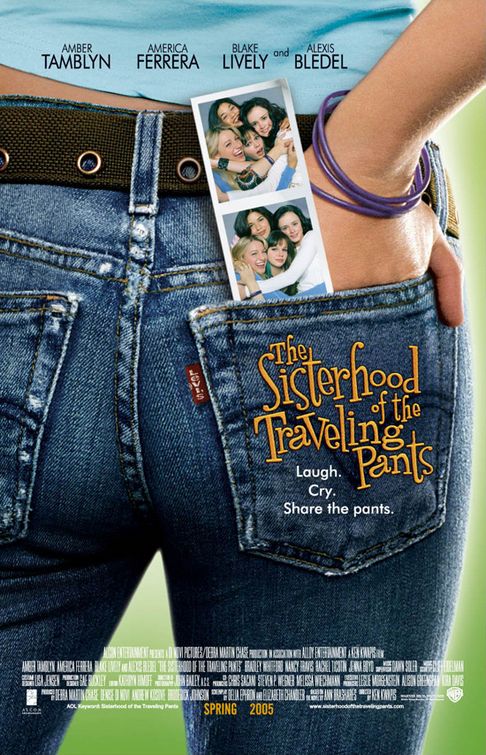 SISTERHOOD OF THE TRAVELING PANTS is a melodrama about four friends who each go on a summer adventure and find themselves lonely for different reasons. Lena is a shy girl who visits her grandparents in Greece and realizes that she is insecure. Bridget goes to soccer camp in Mexico and tries romance to forget the pain from her mother’s recent death. Carmen visits her father in South Carolina and attempts to fit into his new family. Tibby stays home and tries to make a movie that expresses her negative viewpoint.

Although the movie looks like a vapid TV show, it approaches its characters thoughtfully. After all, these girls’ problems – alienation from parents, disappointment from friends, disapproval of oneself – are very common ones. Unfortunately, the movie’s solutions aren’t substantial. It encourages people to live for life’s fleeting good moments, since that’s supposedly all there is. This dangerously vain philosophy encourages a search for temporary pleasure instead of lasting joy and is not biblical. A dicey worldview makes SISTERHOOD a poor choice for teenagers, but the girls’ complex problems can provide a good starting point for meaningful discussion about God’s true purpose for our life.

(RoRo, B, C, L, S, N, M) Romantic worldview that enjoys life’s fleeting good moments because “that’s all there is,” and characters talk about having faith but their faith is aimless and grounded on earth, as well as some moral points such as a love for family and the sick, and a main character is Catholic and prays; three light obscenities and six profanities like “Oh my God!”; discussion of teenager losing her virginity at summer camp, references to making out and adults with children from previous marriages cohabitate; teenage girls stand in their underwear in a prolonged scene, and people in beachwear; no alcohol or smoking; and, references to a parent’s suicide, parent leaves his family, child breaks a promise, and vandalism.

SISTERHOOD OF THE TRAVELING PANTS is a melodrama aimed at teenage girls that tangles the stories of four lifelong friends who each go on a summer adventure and find themselves lonely for vastly different reasons.

Lena (Alexis Bledel) is a shy, serious girl who is going to Greece for the summer to see her grandparents. While sketching buildings in the village, she happens upon a dynamic college student who makes her realize that she alienates herself from people because of insecurity. Bridget (Blake Lively), meanwhile, goes to Mexico for soccer camp. She is still stinging from the recent suicide of her mother and tries to bury her loneliness and hurt through a relationship with one of the coaches.

A third friend, Carmen (America Ferrera), travels to South Carolina to spend time with her occasionally estranged father, played by Bradley Whitford of THE WEST WING. Once she arrives, Carmen’s father tells her that he is about to remarry, and that he is already living with the woman and her two children. Carmen is heartbroken and feels excluded from her father’s life. Finally, Tibby (Amber Tamblyn) is staying at home in Virginia to work and make a documentary. She feels like her friends have abandoned her, but she begrudgingly makes a new friend who makes her reevaluate her attitudes.

Although SISTERHOOD shares many of the trappings of those vapid, tacky WB Network dramas, it approaches its characters and their problems thoughtfully. These girls’ problems, after all – alienation from parents, disappointment from friends, disapproval of oneself – are very common ones. The movie, and probably the book upon which it is based, seems designed to let teenagers know that they are not alone in their problems and that there is, in fact, an end in sight.

Unfortunately, the glimmer of hope offered by the movie isn’t a substantial one. A 12-year-old emerges as a TUESDAY WITH MORRIE-style oracle who tells Tibby that she has to look for the happy parts of life and live for them, since those fleeting good moments are the only reason to keep going. Christians would differ with that notion and supply a few other reasons to live: to glorify God, to love others and share the Gospel with them, and to be obedient to their Creator. The advice that Tibby shares with the other girls is a vain philosophy that leaves people constantly searching for temporal pleasure instead of lasting joy. This bad philosophy infects so many teen television programs and movies and is partially responsible for a generation that is desperately and disappointedly searching for happiness without any clue as to where they can find it.

One character illustrates this aimless pleasure seeking. Bridget, the girl at soccer camp, throws herself at a boy a few years older than she. She thinks that the boy’s affection, both emotional and physical, will distract her from the terrible pain she feels after the death of her mother. Although it is not depicted but only referenced later, Bridget loses her virginity to the boy, and then grieves her mistake. Sex did not make her feel better, only more lonely, since the connection she experienced with the boy wasn’t a meaningful one. That’s a salient point to make, but the movie glosses over it in the final minutes, assigning a pat and unsatisfying conclusion to Bridget’s unhappiness.

SISTERHOOD OF THE TRAVELING PANTS has its fare share of wrongheaded and just plain silly moments (Lena and her Greek suitor declare their heartfelt love after only a few days), but it also encourages loving reconciliation of family, as in Carmen’s case. The movie’s ending, when Carmen must decide what role she’ll play in her father’s new life, is extremely touching and made many members of the advance screening audience cry.

This movie is very well acted and well considered. It offers the audience lifelike characters who breathe emotion into situations that are otherwise trite. A dicey worldview makes SISTERHOOD a poor choice for teenagers who would be unduly influenced, but the girls’ complex problems can also provide a good starting point for meaningful discussion about God’s true purpose for our life.

Rating: PG for thematic elements, some sensuality and language