SLEEPING WITH OTHER PEOPLE

"A Life of Promiscuity Is Empty" 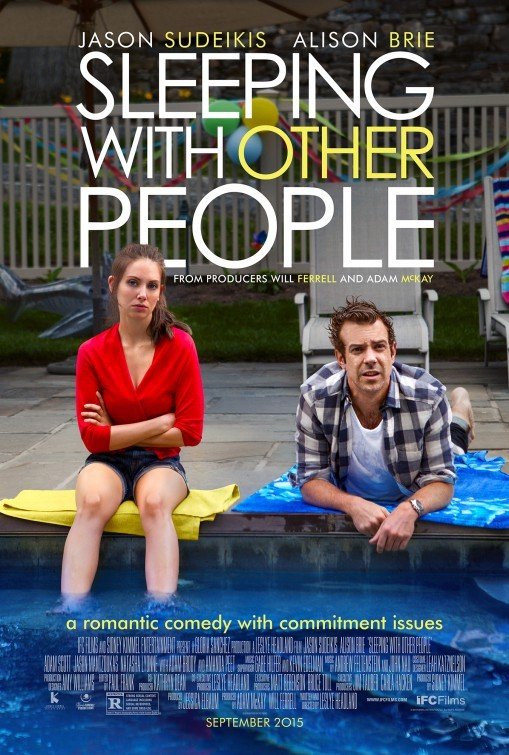 SLEEPING WITH OTHER PEOPLE tells the story of Jack and Lainey, who had a one-night stand in college 15 years ago. They meet again as members of a sex addiction support group. They agree to meet later, but there’s a mix-up about whether their meeting is a date. They decide to be platonic friends while engaging in affairs with other people. Jake plays the field while Lainey’s secretly involved with a doctor engaged to marry another woman. Lainey’s surprise decision to attend medical school in another state forces Jake to reconsider their relationship.

Jason Sudeikis and Alison Brie have great chemistry together as Jake and Lainey in SLEEPING WITH OTHER PEOPLE. The movie throws in some entertaining plot twists that add to the story. Ultimately, the movie validates monogamy and marriage over promiscuity, which is viewed as empty and unsatisfying. However, the movie’s also filled with abundant crude dialogue and lewd situations. There’s also an intended comical scene about taking an illegal drug. The frequent negative content in SLEEPING WITH OTHER PEOPLE makes it unacceptable, despite the story’s positive moral resolution.

(PaPa, B, Ro, LLL, V, SS, NN, A, DD, MM) Strong pagan, somewhat mixed, worldview with a moral premise eventually favoring monogamy and marriage over promiscuity, plus some Romantic elements; at least 75 obscenities (mostly “f” words) and about 10 profanities; light comic violence; extreme sexual content includes crude language, three depicted sex scenes but without explicit or extreme nudity, depicted adulterous relationship but eventually rebuked, and man graphically demonstrates self-abuse with a water bottle; partial rear female nudity, inebriated woman strips down to bra in front of children, upper male nudity; alcohol use; smoking and Ecstasy use; and, strong miscellaneous immorality such as couple arrives high on Ecstasy at a friend’s children’s party, and woman dances and eventually strips down to bra in front of children, plus it is joked that sex disappears after marriage, and there are jokes against having children, but the couple making most of these jokes are a married couple who are clearly still loyal to each other and seem to be good parents otherwise.

SLEEPING WITH OTHER PEOPLE tells the story of a man and woman who lost their virginity to each other in college, then meet again 15 years later as members of a sex addiction support group and decide to become platonic friends while engaging in affairs with others. SLEEPING WITH OTHER PEOPLE has a strong, somewhat mixed pagan worldview with Romantic elements and lots of crude dialogue and behavior but gradually becomes almost strongly moral as the friends realize their affairs make them miserable, and they want true love and monogamy.

The movie follows Jake (Jason Sudeikis) and Lainey (Alison Brie), two thirtysomething New Yorkers who met in college many years before and lost their virginity to each other in a one-night stand. They meet again as members of a sex addiction anonymous group and exchange contact information, even though they feel awkward about meeting again. They agree to meet, but she thinks it’s a date, and he thinks they’re just being friendly even though he normally sleeps with any woman he finds attractive, and she’s engaged in a secret affair with an engaged, then later married, gynecologist (Adam Scott). When Jake realizes Lainey thought they were on a date, he tries to shift gears, but then they decide they feel better as friends and vow to avoid having sex together again, but to be extremely good friends.

Thus, begins writer-director Leslye Headland’s modern, raunchier attempt at updating WHEN HARRY MET SALLY, and she largely succeeds. While HARRY was largely a restrained yet R-rated take on male-female relationships, SLEEPING is much more risqué and at times crass in its approach, yet arrives at a similarly strong tribute to true love, marriage and monogamy.

Once Jake and Lainey vow to remain friends, they are shown still engaging in other illicit relationships and often discuss them for intended comedic effect. Lainey can’t stop seeing the gynecologist, even as he uses her and then gets engaged, then married to another woman. After a heated confrontation with another random sex partner, Jake finally realizes his life is empty and that he just cares for Lainey and wants to spend as much time as possible with her, even as friends.

Lainey’s surprise decision to attend medical school in another state forces them to face what they really want in life. This may sound like just a predictable ending, but there is much more to the movie, and the more the movie throws in the plot twists, the more engaging and appealing it becomes as its moves towards denouncing promiscuity and embracing monogamy.

Sudeikis and Brie have terrific chemistry together, and he in particular stretches his emotional range far beyond anything he’s performed before. The movie is still very, very risqué, crude and offensive even as it reaches positive moral conclusions, however, so viewers are extremely cautioned about SLEEPING WITH OTHER PEOPLE. The content before the positive ending is just too crude and unacceptable. Therefore, MOVIEGUIDE® gives SLEEPING WITH OTHER PEOPLE its next to lowest acceptability rating, Minus 3.

Despite all of this immoral content, SLEEPING WITH OTHER PEOPLE surprisingly makes a strong case against promiscuity, showing that it has devastating emotional consequences for its leads. The fact that the two leads are insistent on just being friends, rather than engaging in sex together, also gives the movie a chance to positively show male-female friendship in a purely platonic sense. SPOILER ALERT: Ultimately, as the main couple of friends finally realize they love each other, they agree to get married and not have sex until they’re married. Thus, these two, who it is mentioned lost their virginity to each other in a one night stand in college, both lost their virginity to each other and saved themselves for marriage later. It is clear they are much happier as they are about to get married. SPOILER END.