"Everybody Needs a Friendly Paw" 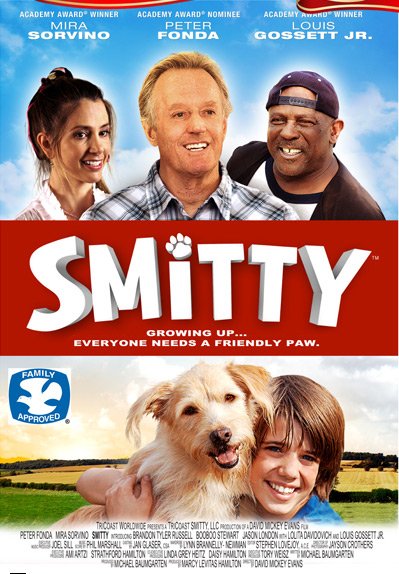 SMITTY is a heartfelt, touching story about a teenage boy, Ben, and a dog who are brought together by Ben’s grandfather. Thirteen-year-old Ben gets into trouble at school. So, his mother sends him to spend the summer in Iowa on a farm with his estranged grandfather, Jack. To keep Ben company and in line, Jack gives him a smart farm dog, Smitty, from an animal shelter. Between Smitty and a friendly neighbor, Ben soon learns lessons about friendship, family, and responsibility. Smitty also helps Ben and his mother reunite with Grandpa Jack. Together, they begin to see life for the gift that it is.

The character and plot development in SMITTY leaves something to be desired, but the movie is truly suited for all ages. Despite moments of conflict and hardship, the mood is warm and devoid of darkness. The movie does contain mild episodes of vandalism, aggravated parenting, smarting off to adults, and broken family dynamics. None of these elements are promoted, however. Instead, they are negated and redeemed. SMITTY doesn’t depict an explicitly Christian outlook, but there’s an answered prayer, an apparent miracle, and some references to God.

(CC, BBB, Ro, L, V, M) Strong Christian worldview overall with very strong moral/biblical undertones throughout, which is set over and against an oppositional worldview of mildly romanticist, self-serving moral relativism, destructive behavior and irresponsibility; four mild obscenities, two “sucks,” one “hell,” one “crap”; mild violence, one vandalism scene, one dynamite explosion, one murder threat, one shotgun loading; no sexual content, one romantic kiss, one implicit reference to premarital sex since young protagonist was born out of wedlock; no nudity; no alcohol use; no smoking; and, some miscellaneous immorality including lying, revenge, stealing, shirking on work, tardiness, dysfunctional family, disrespectfulness, and several uses of the word “hate” directed toward adults.

SMITTY is a heartfelt, touching story about a teenage boy, Ben, and a dog.

“It’s not all about you,” Ben’s mother Amanda (Mira Sorvino) tells her son. “Try to think of someone besides yourself.” These are the words she imparts to Ben when she leaves him to the mercy of his stubborn, old-fashioned grandpa Jack (Peter Fonda) for several months of blue-collar labor in rural Iowa.

Brandon Tyler Russell brings a strong performance as Ben. His single mother had him out of wedlock and is suffering the consequences. Ben is an only child, a spoiled Chicago youth with an attitude. He’s a loner at school because he’s had to move around so much.

Through a series of unfortunate events, Ben is framed for a theft he didn’t commit and is forced to spend the summer at his grandfather’s farm. Ben’s mom and grandpa have been estranged for some time, so feelings are tense and uncomfortable at first. The confrontation between Ben and his grandfather is stern. Ben is from the city and unaccustomed to the daily challenges of farm life. While they are reluctant to confide in each other, however, the two of them eventually soften up and learn some invaluable truths about family, love, and commitment.

Smitty the farm dog is no Beethoven, Lassie, or Old Yeller, but his loyalty, obedience, and sacrifice provides the example and companionship that Ben needs and eventually embraces for himself. More significantly, Smitty is a homeless, animal shelter mutt – not unlike Ben – looking for true friendship.

Thanks to apt costume design, a small town setting, and traditional decorating for the main scenes, the contrasting essence and social conditions of Middle American culture to metropolitan society are keenly portrayed. The stereotype of countryside laziness is quickly shot down, while a laid back, “actions speak louder than words” philosophy shines through. Typical teenage troublemakers in the movie are given a bad name but for the right reasons. If there’s a weakness in the storyline, it’s that Smitty’s character is somewhat sidelined, save for an anticlimactic but somewhat surprising ending.

In spite of his mistakes, as more of Grandpa Jack’s own history is revealed, it becomes clear that he chose family over futile dreams of fame and fortune along the way. Forgiveness and reconciliation between family members are major themes. This is a movie about second chances and responding with perseverance in the face of adversity. Ben’s experience is the bridge that provides the opportunity for re-connection between his grandfather and mother. This enables them to start over and reestablish a loving, healthy relationship. Children can learn much from this story about the realities and difficulties of life – all while having the material presented in an appropriate and family-friendly fashion.

Despite moments of conflict and hardship, the mood in SMITTY is warm and devoid of darkness. The movie doesn’t depict an explicitly Christian outlook, but there’s an answered prayer and an apparent miracle in a time of desperation, as well as some vague references to God. The values espoused are nonetheless biblical and morally uplifting. They are generally supportive of a Christian worldview.