"Moral Reflections on the Past" 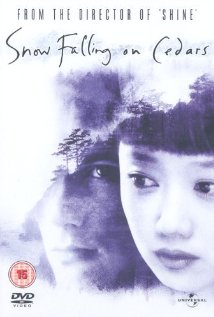 In SNOW FALLING ON CEDARS, Ethan Hawke stars as Ishmael, a young reporter in the late 1940s on the Washington State shore. A Japanese-American named Kazuo (“kazoo”) is charged with murdering a white fisherman. The story then flashes back, fitting different pieces of the puzzling death. The primary stories are a previous forbidden love affair between Ishmael and Hatsue, now Kazuo’s wife, and the internment of Japanese Americans during World War II. Ishmael's love for Hatsue causes him to explore the crime scene anew to help extricate her husband, a man he does not like but knows he must forgive.

SNOW FALLING ON CEDARS tells a strong narrative in intricate detail, with themes of forgiveness, justice, truth, and racial tolerance. It has some excellent acting, especially by Ethan Hawke and Max von Sydow, but moves a little too slowly at times. Unlike some dramas which spoil history and influence viewers to sympathize with sinners, SNOW FALLING ON CEDARS depicts sinful people who recognize truth and work to redeem injustice. It contains mild violence, mild foul language and a few mild sexual encounters, but points to noble Christian standards which eventually are victorious.

Now, well into Oscar season, SNOW FALLING ON CEDARS ranks, at least in some categories, as a strong contender for picking up golden boys – several of those that little statuettes called “Oscar” that the Academy of Motion Picture Arts and Sciences hands out every March. Excellently directed and photographed, it tells a strong narrative in intricate detail, all within the themes of forgiveness, justice, truth, and racial tolerance. It truly is a powerful drama.

As the lawyers call witnesses to the stand, and introduce evidence, the story flashes back, fitting different pieces of the puzzling death. The primary flashback is of a previous, young forbidden love affair between Ishmael and Hatsue Miyamoto (Youki Kudoh), now Kazuo’s wife. Hatsue’s mother thinks that Hatsue should marry a Japanese. Hatsue’s mother forbids Hatsue to see Ishmael. A secondary story involves the bombing of Pearl Harbor and the rounding up of Japanese Americans for internment camps. Hatsue and her family are taken away from their small fishing village to a compound in the California desert.

As prejudice and fear against the Japanese rears its ugly head, the story reveals that Kazuo had a very strong motive for killing Ole. Alvin Hooks thinks the outcome of the case is firmly established, but, even though he suffered a severe injury during the war at the hands of the Japanese, Ishmael’s love for Hatsue causes him to explore the crime scene anew to help her husband, a man he does not like, but knows he must forgive.

Very few stories about the treatment of Japanese Americans during W.W. II have been made. WB TV’s 7th HEAVEN in late November had a full hour devoted to this topic, and THE JOY LUCK CLUB touched briefly on East-West romances. Nevertheless, this movie is really about universal themes of love, forgiveness, justice, truth, and tolerance of other races.

Ethan Hawke primarily has been known as a sensitive, but only fair actor. He performs his best work here, as a tough, fractured, but determined, young man who has a lot of past memories haunting him. Yet, with no speeches or outstanding solo scenes, he may not get an Academy Award nomination. The best actor here who stands to get a nomination is Max von Sydow, a man many young people may not appreciate for being an outstanding talent for at least half a century. If Mr. Von Sydow is planning to retire after this movie, he has finished his career with a very memorable, virtuous, but fatalistic, character.

Production value complaints are minimal for SNOW FALLING ON CEDARS. The movie perhaps moves a little too slowly and at times is a little too arty for its own sake. For instance, sometimes, the movie’s swirls of images don’t drive the story forward.

At the time of World War II, America’s religious expression was very pronounced and profound. This movie underplays overt symbols of Christian expression in favor of forgiveness, dignity and moral themes. Ishmael’s eventual care for the Japanese may not stem so much from a Christian love, but rather from the memory of a father who was considered by some to be anti-American because he didn’t favor the internment of the Japanese during the war. Yet, Ishmael did his duty, served in the war, fought the Japanese, and even lost a limb. His eventual forgiveness of Hatsue for marrying another man, therefore, ranks as all the more poignant and powerful.

Unlike TITANIC and THE ENGLISH PATIENT, which spoil history and influence the audience to sympathize with sinners, SNOW FALLING ON CEDARS depicts sinful people recognizing truth and working to redeem an injustice, in a time when national circumstances dictated war and brutality. It may be an imperfect, not altogether moral movie, but it points to noble Christian virtues which eventually are victorious, including love for one’s fellow man, no matter what the circumstances.