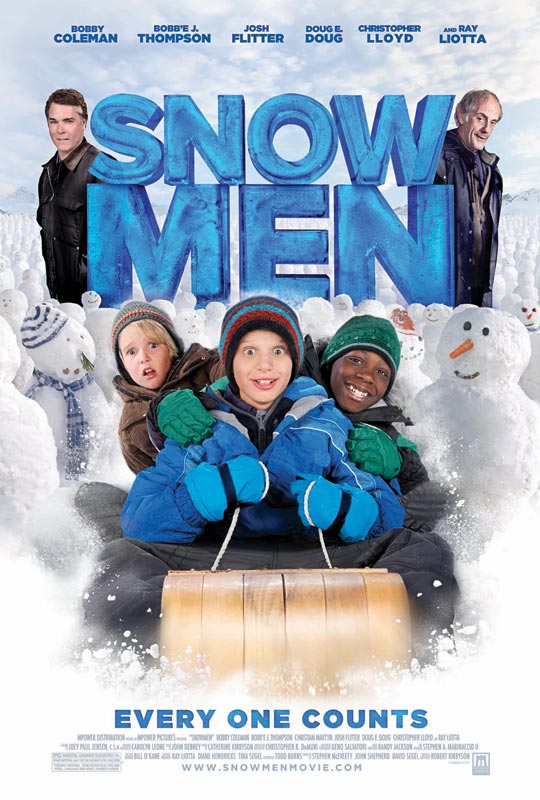 In SNOWMEN, three pre-teenage friends try to set a Guinness Book of World Records by creating the most snowmen in one day. Billy is the ringleader and is recovering from cancer. He tells his friends he’s had a relapse. Billy becomes obsessed with doing things that will get him remembered after he dies, but when it’s revealed Billy is not dying but just has a cold, the snowmen event is canceled. Everyone’s upset because they think Billy has been lying to them. Then, Billy falls through the ice and may die.

Bobby Coleman as Billy is terrific. The story moves along with a good dose of lighthearted humor. Christopher Lloyd brings home the message that it’s the person you are – not what famous things you do – that’s important. There is discussion of heaven, mostly played for laughs, about whether Benjamin Franklin is an angel and if indeed all dogs go to heaven. There’s also a strong subplot about a new kid from Jamaica who has to learn to ice skate when trying to get help for Billy. Happily, there’s only a little negative content in SNOWMEN and very much to commend.

(BBB, C, L, V, M) Very strong moral worldview with solid Christian elements extolling giving your life to save someone else, friendship, and seeking to be known for the person you are and not for a famous act; one exclamatory profanity, no obscenities; boy falls through ice hole, boy dies but resuscitated (handled tastefully), bully and hero fight, boy hits bully on mouth which bleeds; no sex scenes; no nudity; no alcohol; no smoking or drugs; and, bullying, close up of frozen corpse, scatological humor.

SNOWMEN tells the story of three pre-teenage friends who attempt to set a Guinness Book of World Records by creating the most snowmen in a single day. Billy is the ringleader and is recovering from cancer. He confides in his friends he’s had a relapse because last time he had cancer his Dad told him he just had a cold – something his Dad is saying this time too.

Billy becomes obsessed with trying to do things that will get him famous and remembered after he dies. The three friends discover a frozen body and get some notoriety from that. Then, they attempt to set the world record for most snowmen but have a hard time getting volunteers. Billy takes off his stocking cap to reveal his bald head from chemotherapy, which incites pity, causing many people to sign up to volunteer.

[SPOILERS FOLLOW] When Billy’s publicity-hungry car salesman dad shows up to the snowmen event, he reveals that Billy is not dying; he really has a cold. The event is canceled because it seems that Billy’s been lying to everyone.

When Billy and friends are harassed by Jason the bully, Billy pulls Jason out of an icy lake, but in doing so, falls in himself. His friends try to get him, but he dies for a number of hours, but is resuscitated in the hospital.

There is much to recommend in this charming movie. Bobby Coleman as Billy is terrific. The production values are solid, and the story moves along with a good dose of light hearted character humor. Christopher Lloyd as the cemetery caretaker brings home the message that it’s the person that you are – not what famous thing you do – that’s important.

There is discussion of heaven as the boys talk about it. It’s mostly played for laughs about whether Benjamin Franklin is an angel and if indeed all dogs do go to heaven. There is a strong secondary story of Howie, the new kid from Jamaica, who has to learn to ice skate when trying to get help for Billy.

Another thread of the story is Billy’s Dad learning to not “spin” (lie), as he does on his used car commercials. It’s the father’s “spinning” that made Billy think he had a cancer relapse.

There is happily very little negative content aside from bullying, a close up of frozen corpse, and scatological humor, and very much to commend in SNOWMEN.