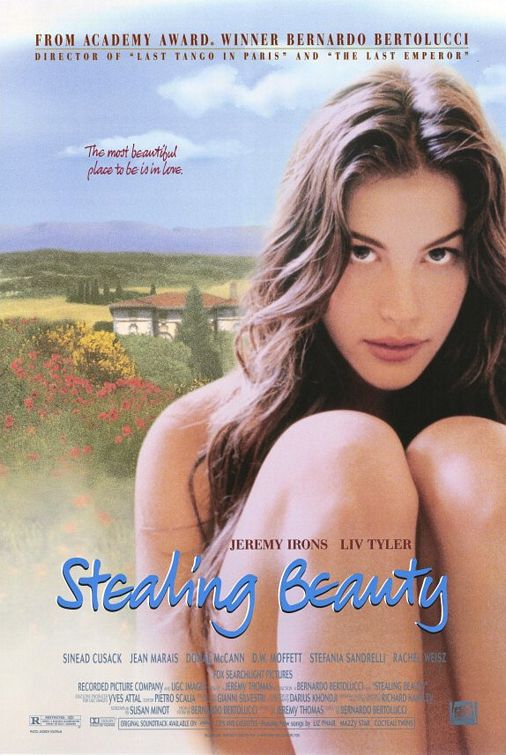 STEALING BEAUTY by Bernardo Bertolucci stars Liv Tylor as an American girl who visits her indulgent and perverse family friends in Italy. Her goals are to find the identity of her birth father and to rekindle love with the boy who first kissed her. Though beautifully photographed, the movie is a sexual coming of age story with much nudity.

Welcome to the lifestyles of the indulgent and perverse. In STEALING BEAUTY, the renowned Marxist Bernardo Bertolucci returns to Italy to portray the deflowering of an American girl. Liv Tylor stars as Lucy Harmon, who visits Tuscany, a place where her deceased mother lived twenty years earlier. Lucy has two goals: to find her true birth father and become reacquainted with the boy who gave her first kiss, who turns out to be a repellent lecher. There amongst the grape arbors, she meets a whole cast of perverse eccentrics who want her to lose her virginity. In time, not only does she find her birth father, but she discovers a most unlikely lover.

Lavishly photographed, STEALING BEAUTY is a male fantasy intended to convince young maidens to find lovers. It is not about sexual restraint or correct sexual behaviors, but about sexual awakening. There does exist a married couple, but they are not set apart as the example or an ideal. STEALING BEAUTY also is about finding one’s identity. Ironically, Liv Tylor didn’t know who her own birth father was until she was 9-years-old. Receiving lavish praise at Cannes Film Festival, STEALING BEAUTY does display cinematic excellence; however, containing much nudity, it invites the viewer to be entertained by the deflowering of the heroine.